Today's wreck is on Makin Island (present-day Butaritari Island). The Raid On Makin took place on August 17-18, 1942 and during that raid an "Emily" flying boat was destroyed.
There are many photos of the wreck on-line, here are a few of them. 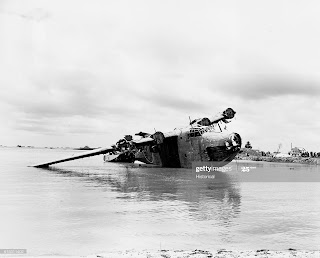 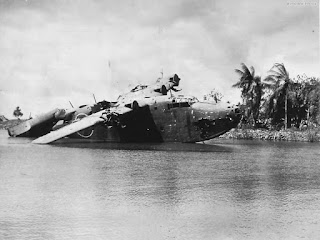 There are also two short videos. One from Getty

And the other from here.


The above photos and videos were not taken during the raid but during the subsequent landing of US forces on Butaritari on November 20, 1943 and later.

So, let's see what happened during the raid and how the "Emily" was destroyed.
According to this source:


"The danger was over and at 12:55 hours the USS. Nautilus surfaced and picked up on their radar another group of aircraft approaching from the north. They did not manage to alert Lt. Col. Carlson and his Raiders because of faulty radio communications. The USS. Nautilus immediately submerged again and in the process managed to alert the USS. Argonaut. The twelve aircraft included two Kawanishi H8K ‘Emely’ Type 2 large flying boats, four Kawanishi E7K1 Type 94 ‘Alf’ recon float planes, and four Mitsubishi A6M Type 0 ‘Zero’ with two more Nakajima E6N2 Type 95 ‘Dave’ seaplanes came at 13:20 hours.

After about seventy minutes of strafing and bombing the Raider lines and positions although doing little damage. Ten aircraft disappeared and a Japanese ‘Emily’ and a ‘Dave’ seaplanes landed in the lagoon a 1000 yards from the shore off Kings Wharf. The Raider took up positions and took aim with their anti-tank rifles and machine guns. The Platoon Sergeant, Sgt. Victor Maghakian, nicknamed ‘Transport’ who was one of the legendary old China Marine veterans of A Company directed three machine guns along with the two Boys anti-tank rifles near Kings Wharf and opened fire with tracer ammunition.

The Dave seaplane busted into flames and sank as it taxied in and the Emily made a speedy turn to avoid the fire. It tried to take off, but in the attempt to avoid the Raiders fire, it pulled up too sharply and stalled. It hit the lagoon and exploded into flames. Sgt. Maghakian did his job well. The Emily burned and settled into a mooring area the wreck can be seen to this day. Both aircraft where destroyed. Once again Lt. Col. Carlson had heard rumors from the natives about Japanese reinforcements pouring out of the seaplane. The Emily flying boat was capable of carrying 40 passengers; the natives stated that 35 Japanese had escaped the wreck."