Today we're going to examine the wrecks found on the island of Peleliu in the Palaus. These were mostly found around the airfield of the island in pretty bad condition after the U.S. Navy bombardment.
In the first video, from here, we can see an overall view of the airfield, the damaged buildings and installations and a number of Zero fighters, "Betty" bombers and at least one Aichi D3A "Vall".

In the photo below, from here, we can barely see the tail of a "Betty" in the background with the number "23" on the tail.

In another official USMC photo, we can see the tail of a "Betty" with a number "8". 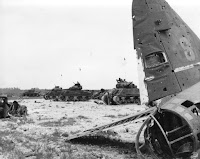 (I hope you will not start discussing in the comments the Sherman tanks...)

This excellent photo, from here, reveals a lot more about the "Betty" tail markings. 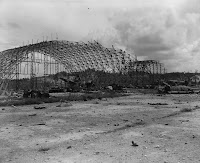 We can see that the one on the far right has the number "27" on the tail and the kanji "龍" (ryu = dragon). That would meen it belonged to the 761 Kokutai. The unit first dispatched nine "Nell" bombers to Peleliu Island, on January 18, 1944, for patrol missions. They were replaced by nine "Betty" bombers on February 10, 1944. The main power of the unit was ordered to relocate to Tinian on February 22 and eight of the "Betty" bombers on Peleliu joined them on February 19. During the Battle for the Marianas the unit lost seven "Nell" and 32 "Betty" bombers. Following this, more aircraft were dispatched from Japan and in the end of March there were about 40 aircraft in Saipan, Tinian and Guam. When the US fleet moved against the Palaus, the unit sent 14 aircraft to Peleliu but most were lost and the unit eventually returned to Japan.
The unit organized four hikotai, one with carrier bombers called Kogeki 105, one with carrier attackers named Kogeki 251, another with land-based bombers named Kogeki 401 and finally one with land-based attack bombers called Kogeki 704.
On July 10 the unit relocated to the Philippines, where they were spread in Davao, Kendari and Sarangani. When in September the US forces attacked Peleliu and Morotai the unit attcked the enemy forces in the Peleliu area.
The unit used the kanji for "dragon" as its tail marking from July 1943 until February or June 1944 when it changed to "761".

The other visible tail marking in the video, belongs to a Zero fighter with a yellow "321" on its tail. We discussed this unit in this post.

The "Betty" below is of interest as it is a G4M2a with an antenna on the nose of an early model Type 3 Mark 6 Model 4 (Type H6) radar.

The yellow number "76" on the tail seems to have been applied over a previously white "ヨ-385" (Yo-385) marking of the YokosukaKu.
The same aircraft eventually provided protection from the sun to the Marines during chow time, photo from here. 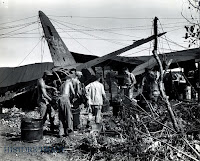 More "Betty" bombers and a Zero in the photo below cortesy of NARA via Arawasi.

In another video, from here, the kanji for tora = tiger, "虎" can be seen on the tail of another Zero.

This means it belonged to the 261Ku, which we saw in Saipan, here. The Battle of Peleliu took place between September and November 1944 and by that time the unit had been disbanded in July of the same year. The 261Ku also used Peleliu as an advanced base so in all probability the Zero in the film was left behind during the fight for the Marianas. According to Akimoto, the unit confusingly used the "tiger" kanji until they advanced to Saipan from which point onward used the number "61" as its tail marking. It looks that the "tiger" kanji has been painted over a previously applied "61" so it seems that in this case the particular aircraft used an older marking instead of the new one.

Yet another Zero found on Peleliu is the one below, from here. 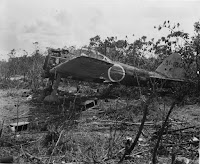 It belonged to the 331Ku, a unit that was organized on July 1, 1943, in Saiki, Oita Prefecture. It was originally a mix unit with carrier fighters and carrier attackers and on August 27 relocated to Sabang, Sumatra, but on September 1, the carrier attackers became the 531Ku and so the 331Ku became a fighter only unit.  In early December the unit relocated to Burma and together with the 705Ku took part in the bombing of Calcuta on December 5.
On March 4, 1944, the 331Ku was reorganized into the 603 Fighter Hikotai and became part of the 202Ku. A new 331Ku was organized based in Iwakuni, Yamaguchi Prefecture as a fighter bomber unit and a buntai of this new unit was first dispatched to Sabang, then to Penang and finally to Peleliu.
The particular aircraft is most probably an A6M2 with a green top camouflage and a hairyokushoku gray tail (if the tail was green, the tail numbers would be in white or at the very least with a white surround). I cannot see the demarcation line near the tail so I would say it is a Mitsubishi built aircraft. A quite interesting modelling subject.

At least two A6M5 Zeros were captured in pretty decent condition but the tail markings are not clear enough to identify the unit(s) they belonged to.

The final video, from here, features a Yokosuka P1Y "Ginga" (Frances) that has been set on fire.

The tail marking is unfortunately not visible and it seems that there was at least one more aircraft of the same type with the tail completely removed. 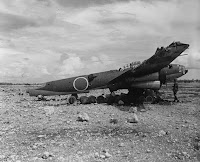 Another aircraft that was found on Peleliu in pretty bad condition was a Showa L2D with tail marking "731-36".

Joe Picarella has identified this aircraft as belonging to the "11th Fleet Air Transport Unit" but Akimoto mentions that the "11 Koku Kantai Shireibu Fuzoku Yushoki-tai" (11th Air Fleet, Headquarter Transport Unit) used the tail marking "730". We found a "Betty" with the same tail marking in Saipan, here.
Two more photos of the same aircraft from here. 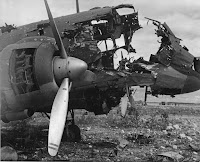 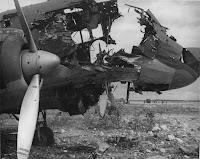 Finally, some random photos of Japanese aircraft wrecks found on Peleliu from Getty and other on-line sources. 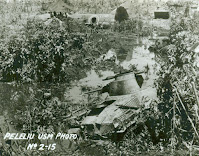 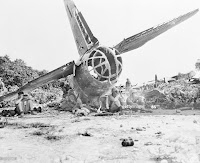 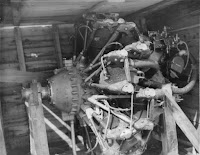 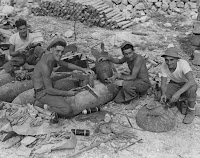 The lovely Getty photo below is captioned as:
"Peleliu-Wac. Sgt. Mary Scarborough, Ashville. N.C., poses in the insignia of wrecked Jap [sic] plane on the Peleliu Airstrip. One of a group of fifty WACs en route to duty on Leyte Island, she was one of the first American girls to land the Palau Island group." 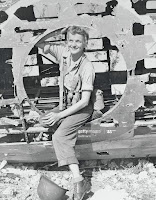 Danillo sent over an email and said:
I am sending back a couple of pictures from the last post in your blog - pictures which I tried to lighten up to see more details.
Concerning the two Zeros at Peleliu  it seems both have had their tail markings overpainted and/or partially obliterated. On the subject in the foreground the only readable number is "01" (maybe in a faded shade of yellow?), while the white surround of the hinomaru has been clearly black overpainted. The top green on the second subject seems of a lighter shade of green.

I agree that the tail number of the Zero in the foreground is barely visible and it looks like a "01". Could be yellow or red. The hinomaru has indeed its white surround overpainted. This was common practice on the unit level to make the plane less visible. They usually used darker green paint, not black.

Danilo also asked:
Regarding the 31-130 Zero you mentioned the demarcation line as a method to recognize a Mitsubishi built aircraft from a Nakajima built one. Can you please explain?... I must confess I have never been able to make such a distinction. 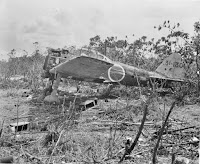 According to Nohara Shigeru, and confirmed by various other sources, the Mitsubishi-built Zeros looked like this:

Artwork by Nohara Shigeru, Model Art #510.
Therefore at least the "01" A6M5 Zero, was built by Nakajima.
The "31-130" Zero is more complicated. As mentioned further above it was originally overal hairyokushoku/grey and then had the green camo applied, maybe at the unit level. The demarcation line doesn't look like Nakajima and the data plate is similar to a Mitsubishi-built aircraft.
Mitsubishi-built A6M2 Zeros in overall hairyokushoku did not have a white surround on the fuselage hinomaru, the Nakajima-built ones had one. But since this has green top camo, it could go either way.

There were ofcourse exceptions of Zeros with weavy or unusual demarcation lines (see MA#510 p.201, 204 & 205) but actually these demarcation line examples indicate that these were older aircraft painted originally overall hairyokushoku and then they had the green top camo applied at the unit or depot level. As a result, their top camouflage paint did not follow the factory paint standards.
Posted by Arawasi

Great posts of late, been very busy at work and home so unable to really comment, but the posts are as always appreciated!

On the Zero with the grey-green tail, do I recall that these aircraft were painted as such for specific reasons? Either for a specific operation, or as an IFF device? Would make for a very nice model.