There was nothing but badly wrecked aircraft on Tarawa after the bloody battles of November 20-23, 1943.

In the first video we can see the tails of at least three "Nell" bombers.

The first is a bit small but we can still make out the tail marking "Y1-3?" with a white line bove it.

The second "Nell" tail on the left doesn't seem to have any tail marking but has two bands on the fuselage.

The tail marking of  the third "Nell" is only partially visible.

The very clear photo below clarifies the tail marking of the first "Nell". 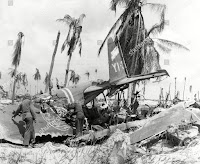 The "Y1" part of the marking indicates that the unit the aircraft belonged to is the 755Ku which was organized on November 1, 1942, from GenzanKu. Originally based in Japan, the unit relocated to the Marshalls in the middle of December of the same year with 43 "Nell" bombers. Using Roi-Namur as their main base, the unit sent detachments to Taroa, Mili, Nauru and other smaller islands on patrol and recconnaissance missions and bombing missions against Nanumea. In the middle of August, the unit started to change to "Betty" bombers but the unit got engaged in battles with little time to train with the new type. After the attack of U.S. forces against the Gilberts in the middle of November 1943, the unit relocated to Roi-Namur, Tarawa, Taroa and others and fought against the enemy forces. In December the unit reached Tinian and Truk.
According to Japanese sources, on November 19, 1943, 13 "Nell" bombers of the unit launched a night torpedo attack claiming to have sunk an aircraft carrier but losing three bombers of their own.
Two days later, another attack was launched in the Tarawa area with 14 bombers but lost seven of their own without causing any casualties to the enemy.
On November 15 the unit had 40 bombers but by November 22 the unit had only 11 left.
The aircraft carrier attack was against USS Independence (CVL-22) and according to Wikipedia:

"Rabaul and Gilbert Islands strikes
Independence sailed from Pearl Harbor for Espiritu Santo on 21 October. During an ensuing carrier attack on Rabaul on 11 November, the ship's gunners scored their first success – six Japanese aircraft shot down. After this operation, the carrier refueled at Espiritu Santo, headed for the Gilbert Islands, and conducted pre-landing strikes on Tarawa 18 to 20 November 1943. During a Japanese counterattack on 20 November, Independence was attacked by a group of aircraft low on the water. Six were shot down, but the aircraft launched at least five torpedoes, one of which hit the carrier's starboard quarter. Seriously damaged, the ship steamed to Funafuti on 23 November for emergency repairs. Independence returned to San Francisco 2 January 1944 for more permanent repairs."

“I dove to the deck, and all Hell broke loose. We did get hit by a very powerful aerial torpedo from a twin-engine Betty. Then word came over the speaker to abandon ship. I surely hated to hear such a command. Luckily, almost immediately, the order was cancelled. This was good news, since I really was not looking forward to going into the water with all the sharks, and possibly the Japanese coming back to finish us off.”

– Herman Brown, “My Navy Story and Life on the Independence”

The photo below, shows the second "Nell" without the tail marking. There is the posibility that this is the tail of the first "Nell" seen from the opposite side and the visible tail part without a tail marking is the back side of the port tail with the marking "Y1-3?"

And the small photo below, from here, shows the partial tail marking of the third "Nell". 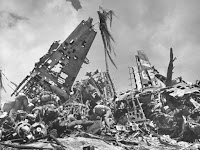 Personally I think that all three "Nell" bombers belonged to the above mentioned 755Ku, but let's move on to the next video.
The video in the begining features a number of IJNAF bombs, a fuel truck and a torpedo...

...followed by the same "Nell" bombers mentioned above.

The third video also from Getty, features a rather unusual Zero.

Bizarrely, it looks as if it has a cross on the under-wing hinomaru and this detail is confirmed in the photo below, from here, which we had originally identified as having been taken at Roi-Namur. 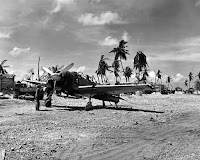 Another Zero in very bad condition is the one below, photo from here.

Another Zero wreck in pretty bad condition can be seen in the photos below. 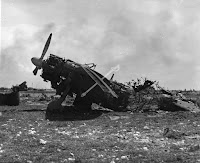 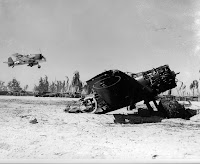 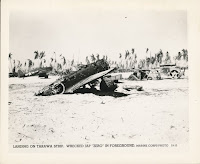 There are also the remains of a "Betty" bomber but no tail marking is visible. 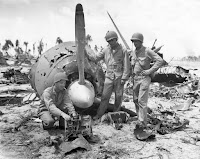 Photo above from here.
Posted by Arawasi

I like how the fuel truck license plate carries the "Y1" code like the Nells themselves. Another great series of images....