Thank you all for your feeback regarding these photos. Let's try to organize and present them little by little instead of posting two dozen photos of the same and different planes in one confusing batch.
So, today let's have a closer look at two more "Hayabusa" that were placed side by side, one from the 59th and one from the 77 Sentai.
Let's start by putting up again the colour photo of the previous post. 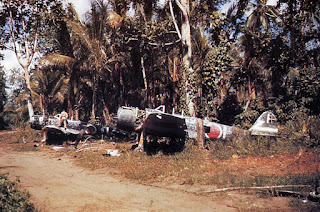 There is the 77 Sentai "Hayabusa" in the foreground, and the number "5" Ki-43 of the 33 Sentai behind it. Behind both aircraft there is only thick jungle and a dirt road in front of them.
In the brilliant photo below (Haya8), I spotted on the net, we can see again the 77 Sentai "Hayabusa", this time missing its rudder. In the foreground is a 59 Sentai "Hayabusa" flown by a pilot of the 2nd Chutai (red tail marking).
In this photo, behind the aircraft there is no longer jungle but a small road and a tent. Unlikely, the seabees to have cleared the jungle behind the planes without disturbing them. I think they were simply moved into the open. 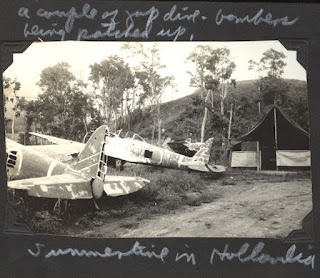 The Ki-43 in the background behind the tent is again the number "5" of the 33 Sentai. The non-camouflaged patterns on the fuselage next to the canopy/cockpit, are a match. 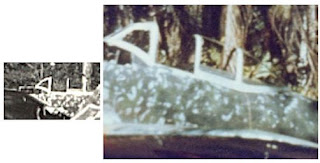 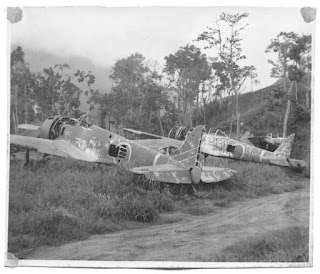 Let's turn our attention to the 77 Sentai "Hayabusa" seen in the b/w photo above.
According to MA#395, it was flown by 2nd Chutai commander Captain Matsuo Yoshihide and is depicted as shown in the illustration below. 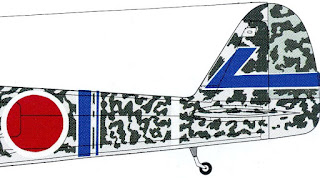 It is obviously not the same with the aircraft seen in the colour photo. The colour of the tail marking and the camouflage are different.
Note that Matsuo's aircraft has some panel hanging under the firewall (Haya8b).

It's a small detail but very helpful to identify the plane in other photos too.
Like this photo (Haya12) that was recently on sale on ebay. 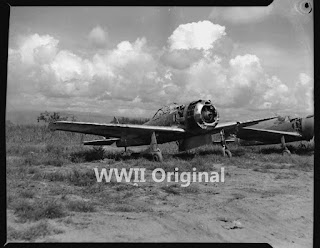 Although the tail marking is not visible on the Ki-43 on the left, we can see the 59 tail marking on the plane on the right.
The photo above (Haya12) was sold with the photo below (Haya13) which features a front view of the 59 Sentai "Hayabusa". Note the cables hanging on the wing edge next to the engine on the starboard side, visible on both photos. 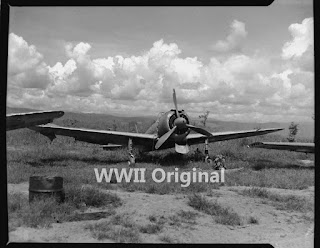 Another photo of the same two Ki-43s found on the net. Although no tail markings are visible, note the panel hanging under Matsuo's plane. 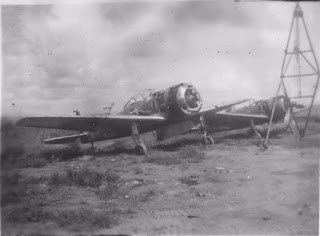 This time there is "a classic US field crane" in front of them, as Radek Pelikán correctly noticed.
Here's another photo from the net of the same two aircraft. 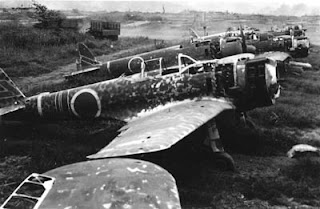 I especially like the last photo as it shows more detail of how the (I presume number 5 of 33 Sentai) aircraft was camouflaged (at least on the wings and perhaps the rear of the fuselage). Looks like a base coat of green was applied (solid or thick mottle) and then darker green or brown splotches were added.

It is interesting to note that the photo you posted of number 5 with the GI, has camo that appears quire different than the colour photo of number 5, or at least the front half of the plane (seen in the colour photo) was camouflaged differently (more squiggles than mottle) than the rear (seen in your photo, heavy splotch/mottle).

I'm looking forward to the next post to continue the discussion.

Hi George
In the photo, Hayabusa is not an antenna, but a classic US field crane.
I assume you will publish the remaining photos from this series later.
Best regards
Radek Pelikan