Let's return to the 77 Sentai "Hayabusa". I re-discovered today a photo (Haya20) in the old "Military Aircraft" of the same aircraft seen in the colour photo. 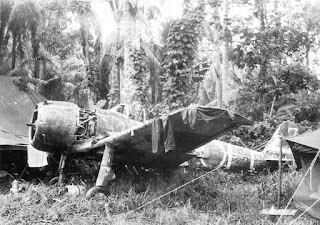 First of all, it is indeed the same aircraft; the camouflage patterns match (Haya20b).

Thanks George. I like the unique detail of the a/c tail number and the painted gear doors.

George, Devlin's artwork possibly (with all careful reservation) shows the aircraft of the 77th Sentai Executive Officer Capt Yoshiro Kuwabara. My assumption is based on two observations: (1) Sometimes the individual aircraft was marked with the Katakana of the 2nd syllable of the pilot's name, e.g. when the first one was already occupied by another pilot, and (2) the presumably blue border of the white tail symbol may point at a HQ assignment.