Let's talk about the 59 Sentai "Hayabusa" now. We already saw some photos of the aircraft together with a 77 Sentai fighter in the previous post. Below is a photo (Haya11) from the SDASM Archive featuring the same aircraft. 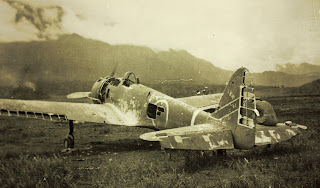 Note the absence of the rear part of the canopy and the piece missing on the leading edge of the tailfin.
Another photo (Haya12) I spotted on the net of the same aircraft from a different angle. 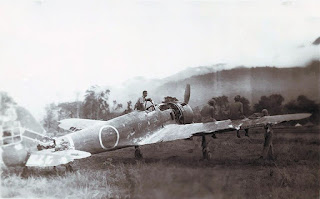 Note the badly damaged and missing starboard aileron.
Another photo from the net (Haya13). 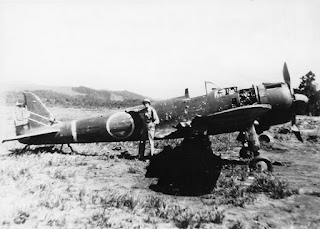 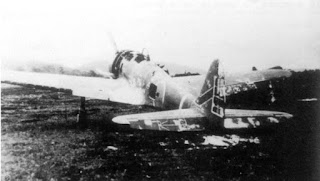 Finally, there are two colour photos of the same aircraft in the Jeff Ethell collection (Haya16 & 17). 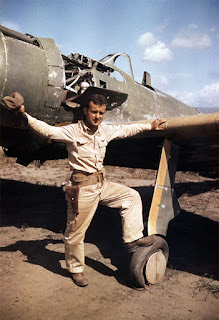 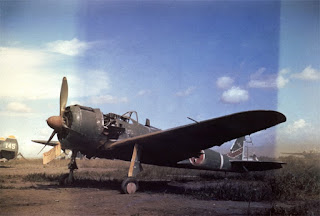 At first glance the aircraft looks to be in overall light brown, but a closer look at the section between the fuselage hinomaru and the tail marking in the top (Haya16) photo, reveals that the top camouflage is actually green.
Without working on the photo too much but just by clicking only once the "automatic colour correction" of the Corel, we can clearly see again that in the lower photo the top colour is green. 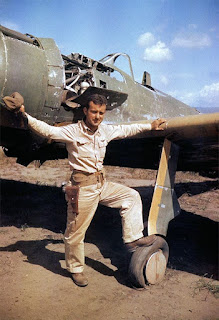 Ed DeKiep has noticed a rather unusual "marking" on the horizontal tail surfaces.

He suggested that what looks like a band is part of the 59th Sentai unit marking. Although it's not impossible, personally, I can't say with 100% certainty that there is a red (?) band there with a white surround. The rest of the aircraft looks quite bland without any personal markings. Bands on the tail were meant to indicate sentai, chutai or hentai leaders. So in this case the particular "Hayabusa" would have had more bands on the fuselage if it belonged to a high ranking pilot. As far as I know no other sentai used the horizontal surfaces to paint the unit marking or part of it. The main reason is that these surfaces are not very visible in the air. There are indeed two white (?) lines painted on the elevator hinges but the rest could just be scratch.
It would have been great if we had a colour photo to prove beyond any doubt what we see there. Or perhaps someone has the time to do a colour comparison analysis between the "band", the tail marking and the green camo?
Radek Pelikán sent over the following great photo (Haya19). 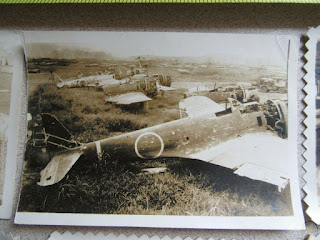 In this photo, the "white" line looks exactly like a line, not a scratch. But is there a red band? I still think we need better evidence to be sure.
Finally, a closer look at Haya15 photo reveals that probably US personnel draw some arrows and stuff, perhaps indicating a part that needed to be removed to be used on another aircraft.

Also, did you notice in the colour photos the red spinner and the absence of antiglare panel on the cowling top?
And last but not least, here's another photo(Haya18) of the 59 Sentai "Hayabusa", in the foreground with other captured IJAAF fighters or what's left of them. 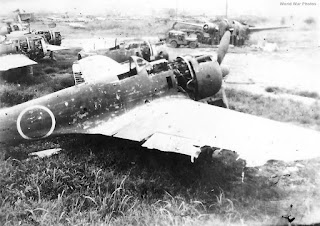 Another detailed investigation George, thank you. One thing I have learned from my friend is to really look at these old photos, as there is a lot of information that can be gleaned by them. This is especially important when researching a subject for a model, as I am now, for my upcoming Hasegawa Ki-43-II ko build. I have Narrowed it down to either the 33 Sentai or 77 Sentai plane, and your posts investigating them have come at a very opportune time for me.

As for the 59 Sentai markings, I have read that the markings continue on the tailplanes, as Haya19 (and other photos) tend to show (in my opinion). There is a photo of postwar 59 Sentai Ki-100 that also shows this band, granted it is faint/the angle of the photograph isn't ideal).