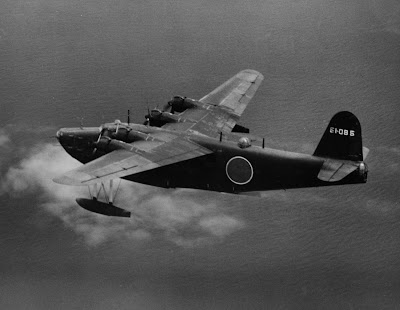 A Type 2 Flying Boat or Kawanishi H8K "Emily" is featured in this NARA photo. According to the caption dated 2, July 1944:
"Japanese "Emily" shot down by a PB4Y piloted by Lt. Stoughton Atwood of VB-115 somewhere in the Central Pacific."
It is a late Model 12 equipped with Type 3 Ku Mk.6 ASV radar as can be attested by the antennae on the nose. The radar was the first IJNAF type for large aircraft and could detect a ship from a height of 4,000m at a distance of 280km. Note that the fuselage side blister has been replaced by a window.

The particular flying boat belonged to the 851 Kokutai. Originally called "Toko Kokutai" from the Japanese reading of the Chinese name of it's base, Donggang in Taiwan, the unit changed it's designation to 851Ku on November 1, 1942 and was equipped with 16 Type 97 Flying Boats or Kawanishi H6K "Mavis". Initially deployed in Rabaul from where they night bombed the US base in the Espiritu Santo Island, the unit moved to the Shortland_Islands in the beginning of 1943. Returned to its home base in Taiwan to recuperate and then deployed to Surabaya in Jawa in April 1943 and stayed in the area until February 1944. During that time the unit performed patrol missions in the Indian Ocean and bombed targets in West Australia. By March 1943 the unit had changed all its flying boats to Kawanishi H8K "Emily".
On March 31, 1944 the most famous tragic event involving flying boats of the unit took place. Two "Emilies" were to transport Admiral Koga Mineichi who had succeeded Yamamoto Isoroku as Commander in Chief of the Combined Fleet, from Palau to Davao but they encountered a typhoon and the admiral's "Emily" was lost.
The unit eventually moved the Davao and on July 1944 to Singapore where it was dissolved with members and material distributed to the 801Ku and other units.
851Ku had the letter O for its marking from November 1942~1943 and then the numbers 51 or 851 from end of 1943~1944.
Posted by Arawasi

A favorite aircraft of mine and one of the best flying boats of WW2. And one might say that it's the grandfather of the Shinmeiwa US-1 and US-2. Interesting bit of history as well. (I wouldn't mind seeing more!)
Has anyone built the (very old) Hasegawa kit?

Thanks for showing this Emily!
I've seen this photo before but not in this excellent
quality. It's a beautiful plane.

One of the crews in my father's squadron, VPB-118, also managed to overtake and shoot down an Emily.
This occurred several months later than the encounter depicted.