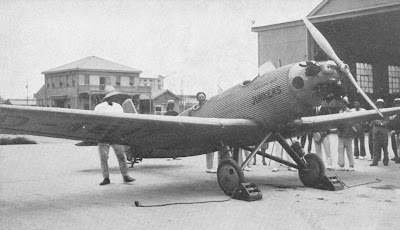 On August 29, 1931 German aviatrix Margarete (Marga) von Etdzorf landed at Haneda, the new airport of Tokyo, with her Junkers A50 Junior registered D-1811. She was the very first non-Japanese aviator, male or female, to land in Haneda.
She had started on August 18 from Berlin and had flown over Siberia the very first woman solo pilot to do so. Her route stops were Königsberg-Moscow-Kazan-Novosibirsk-Hailar-Lake Baikal-Mukden (Shenyang)-Sinuiju (North Korea)-Pyongyang-Seoul-Daegu.
she finally arrived in Hiroshima on August 28 at 18:30 and was greeted enthusiastically. She spent the night at the famous at the time Kikkawa Ryokan and the next day at 07:20 took-off from Hiroshima, making a brief stop in Osaka before reaching Tokyo amid great celebrations.
A magnificent video on UTube about her from Junkers Filmdokumente shows her arrival in Tokyo.

Two days later on August 31 she was awarded the "yukosho" (Golden medal of Merit) from the Imperial Aviation Association.
On October 14 took-off from Haneda and traced back her steps in Japan but chose the Southern route for her return to Germany effort. Unfortunately her plane was destroyed in Bangkok where she suffered very serious injuries.
Feel free to send us more information!
Posted by Arawasi

6800 miles in 10 days is pretty impressive considering Ms Etdzorf had to cover a lot of primitive country to get to Tokyo. Her aircraft was well maintained to keep from having repairs to slow her up.