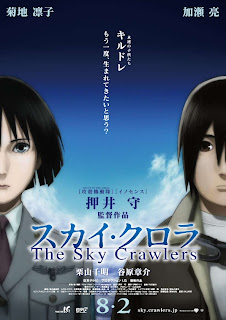 "The Sky Crawlers" is a Japanese anime movie based on the novel by writer MORI Hiroshi. The film was directed by Oshii Mamoru, creator of the famous and brilliant anime films Ghost in the Shell and its sequel Ghost in the Shell 2: Innocence.
The animation for the "The Sky Crawlers" was created by Production IG and the film was released in 2008 by Warner Japan.
A quite interesting cast lent their voices including Kikuchi Rinko, "Babel" & Guillermo del Toro's 2013 film "Pacific Rim" as well as Kuriyama Chiaki, famous for her role in "Kill Bill, Volume 1" (she was as Gogo Yubari, the bad-ass schoolgirl bodyguard of yakuza boss O-Ren Ishii (Lucy Liu).

Here's what our good friend Devlin Chouinard has to say about the movie:

The Sky Crawlers
Impressions and Observations

Imagine that you are an adolescent, maybe 16 or 17 years old,  fuzzy memories of childhood that are not quite yours. You cannot age. You fly and fight for the company as well for country in set-piece battles, as if from some great chess game. This is your entire reason for living, and dying.......
The Sky Crawlers is an interesting mix of characters, aircraft, setting and story. Some things seem distinctly modern, while others are a throwback to times long past, all woven together. This can be seen mostly in the aircraft featured in the film, but also in the settings and other details. Characters, too, follow this same path, however they seem more up-to-date than old fashioned. Much of this is blended together rather well and seems to work.
The story starts in the middle, the viewer finding out the “how and why” as the movie progresses. Much of the main characters' back stories are supplied in this manner. Some aspects of the story seem to raise more questions than answers and this leaves the viewer to fill in the blanks. This and the fact that the viewer is “dropped” into the situation, with little explanation of events, can leave one a bit lost at first.
While the CGI rendered flying is fast paced and exciting, the rest of the film is quite slow, but very well done. I think this almost forces you to be in the same situation as the young pilots, moments of fast paced action interspersed with long periods of boredom. “Boredom” may be the wrong word in a way because there are subtle movements, sounds, and visual textures that can be observed throughout.
One of the best visual elements of this movie are, of course, the aircraft. They look as though they are advanced prop driven World War 2 designs but with a modern twist. In fact, many will know the influences once they see them on the screen. All are rendered in CGI form and blend well with the traditional cell type animation. The backgrounds are well done, looking much like England and Europe in the 1940s, however the control tower at the airfield has a very up to date looking array of antennas! The same situation holds true for many things throughout the film - look for the flat screen television in the cafe that the characters frequent, for example! A mash-up between old and new.
Even more interesting subjects are brought up by the characters - who and what they are, and  the emotional turmoil that they go through. You also find out other surprising twists dealing with the characters toward the latter part of the movie. There are enough turns in the plot to keep you interested, even in the slower parts of the film. In many ways, you will never know the complete story behind the characters. That part is left up to the viewer to work out as noted above.
So, we end up in a strange world where past, present, and near future exist together, and while a bit slow moving at times, seems to convey the feeling and mood of what being in that situation must be like - too much time to think punctuated by life or death struggles. I would say that The Sky Crawlers works on many levels, but is especially interesting for those of us who like historic aviation and flying. It may not be a movie for everyone, but I found it very enjoyable and intriguing.

Note: The above article expresses my impressions of the film, and it is somewhat vague intentionally. I did not want to give anything away, and this may be looked upon as my attempt to get you to see the movie, and thus form your own opinion.

Here's the opening scene of the film with the amazing air combat sequence.


We feature this anime on our blog because the fighter aircraft "Sanka Mk.B" is largely based on the Kyushu J7W Shinden as you can see from the blueprint below. 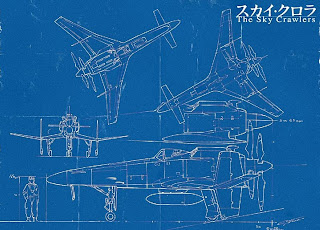 Some stills from the movie showing the beautiful artwork and various details of the aircraft. Note the contra-rotating prop, the position of the cannons and...the starter truck.

BANDAI has released a kit of the "Sanka Mk. B" in 1:72 but unfortunately it's not that easy to find. 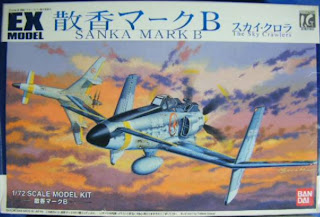 A highly recommended film, especially for the aircraft scenes, that we are pretty sure will fill your head with modeling ideas of exotic and what-if planes.
Posted by Arawasi

My kids love playing the Sky Crawlers video game - I'm sure they'll want to see the movie now, too. Thanks for the information.

The markings on the Sanka kit are strangely reminiscent of Luftwaffe camouflage.

I just watched the video of the opening sequence - WOW!!

Fantastic movie! I've seen it a couple of times.
The battle scenes are great. Thanks for the data.

The one thing I forgot to mention is the haunting musical score. Watching the opening again I was reminded of it, somewhat sad and beautiful all at the same time.

When available, I'll buy the movie onBlueRay.
I watched different scenes on YouTube and enjoyed the dogfights very much!