A most interesting and rare video today from Getty, here,
According to the caption:


A number of IJAAF aircraft types can be seen in the video but the majority is Manpi Ki-79, single and two-seaters, and Tachikawa Ki-55 trainers. 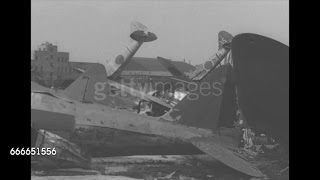 Also, here's an extra photo, again from Getty, of a Kokusai Ki-86 (a Japanese copy of the Bücker Bü 131 "Jungmann") belonging to the Mukden branch of the Koku Shikan Gakko (Army Air Academy) and a Ki-55 trainer in the background.

Honza78 left a comment and asked:
Question, can you decipher the inscription on the Ki-86 rudder?
Since you asked, I located two more photos of the same aircraft.
One from here:

and the other from here:

Only a part of the aircraft name is visible "げつこ" which doesn't mean anything in Japanese without at least one more hiragana. It could be "げっこう" (moonlight) like the well-known IJNAF night fighter type.
In the second photo the full inscription should be visible but, unfortunately, the photo is not clear enough to see anything.
Posted by Arawasi

In photo #8, the tail with "96" on it has an interesting whorled pattern. The underwing camo on the Ki-76 is interesting as well.

Thanks for spotting the typo.

Great as always.
Question, can you decipher the inscription on the Ki-86 rudder?

You have my endless admiration !! Thank you so much for the great response!