As you have noticed there are at least two versions of the same clip with small differences in the contents. These are edited versions.
In 2005, the Japanese toy company Banpresto released a series of eight dvds with aircraft captured by the Allies. Four were about Japanese aircraft (the rest were about German aircraft) and three of them included unedited original clips of the aircraft collected, restored and evaluated by the TAIU in the Philippines.
They are of much better quality than those in the UTube videos and we will present some stills on this and two more posts. It is also a chance to include more relevant information and photos.
We cannot include copies of the clips as they are copyright protected and impossible to copy anyway. The dvds, long sold-out and fairly difficult to find, were on sale through our on-line store when they first came out.
The first clip featured in dvd #2, starts with some clear views of the "mo" "Shoki" we saw in an earlier post. 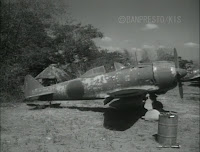 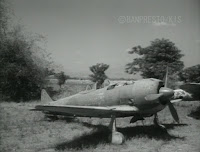 Followed by the 246 Sentai "Shoki" we also noticed in a older post. 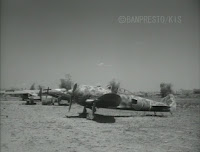 A number of derelict 246 Sentai "Soki" fighters were also gathered.

In the photo above from the Jeff Ethell collection, we can also barely make out the aircraft with blue hinomaru in the background on the right.
Here's another photo.

And a most interesting one I found here, minus the noise. 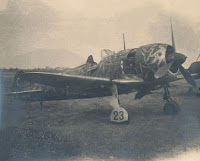 The next aircraft seen in the dvd are "Hien". 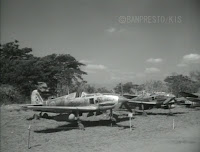 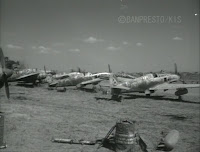 They are the same 19 Sentai "Hien" we first saw in Philippines pt.2, but this time we can see the tail marking of some of them. The one on the right has a crudely applied number "80" next to a white unit marking. The next "Hien" has a number "16" (probably) next to a yellow unit marking.
In the photo below, we can see that the rudders of these "Hien" suffered some damage around the numbers, perhaps by souvenir hunters. 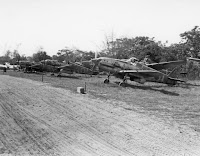 Perhaps that's the reason why some "Hien" had these numbers overpainted, like the one below.

Ryan Boerema contributed a colorized version of his many years ago, here.

A view of probably the same aircraft from the port side.

A better photo of the same "Hien".

Note in the background the "Hayate" on the left and the "Shiden" on the right.
Here's yet another photo of the same aircraft.

Note the two "Hayate" in the background on the left.
The one we can see most of it and the tail marking is the one below, photo from Model Art #493.

A Model Koh, that belonged to the 72 Sentai, 3 Chutai. The tail marking is yellow with a white surround. The number "81" is in white and the cowling front edge with the spinner are also yellow.
Another "Hayate" also captured in the Philippines was a well known belonging to the 11 Sentai which we covered quite extensively here.

Note in the photo above the "mo" "Shoki" standing on the right and a "Toryu" on the left.
We saw in the previous post that one "Hayate" had a landing accident. The one "Hayate" that was flown in the Philippines was "S10".
Below is a photo of another "Hayate" shipped to the US, this one having the code "S17" on the tail.

But let's move on to the next aircraft in the dvd. They are the two "Toryu" we first spotted on Philippines pt. 2. 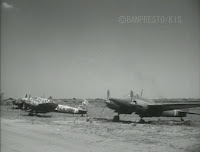 And finally the dvd features a short clip in color of a 27 Sentai "Toryu" numbered "86". 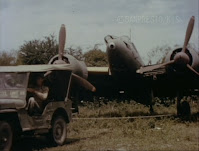 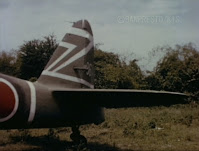 The aircraft was obviously moved around but in the photo below we can see it squeezed next to the 208 Sentai "Lily" we first saw in Philippines pt. 3 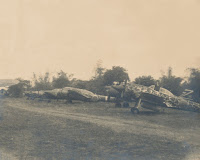 Compare if you like the color of the drop tank and the IFF stripe to the fuselage hinomaru.
Here's a photo of another 27 Sentai "Toryu" with the number "37" on its tail.

The aircraft looks in almost pristine condition in the photo above, but in the photo below it looks really bad. Note the darker rudder in both photos. Could it be red?

This one does not have a tail number though.