The clip today, from here, is about the TAIU groups that were sent to the Philippines to evaluate captured Japanese aircraft.
For those who don't know the details and since it doesn't have a proper separate entry, here's an edited version of the story of the ATAIU groups from Wikipedia, here: 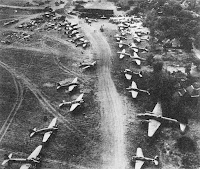 Above is a photo taken at "Clark Field" where the TAIU had set shop. The exact location is unknown. Keep in mind that what is known as "Clark Field" was actually a complex of about a dozen airfields.
The Mitsubishi Ki-46-III "Dinah" we first see in the video does not seem to have a tail marking at all and I believe is not in the above photo. We will see her again in the following part of this series.

Next, the video features a Kawanishi N1K1-J "Shiden" (George) which is located in the back of the above panoramic photo, near the building.

Then we see three Kawasaki Ki-61 "Hien" (Tony) fighters all belonging to the 19th Sentai.

They are the aircraft found in this area in the panoramic photo. 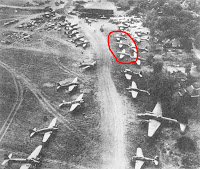 We discussed in detail the unit and its "Hien" found in Clark Field in an older post, here.
The NARA photo below shows the same aircraft from the oposite side of the video shot.

The next aircraft in the video are two Kawasaki Ki-45 "Toryu" (Nick).

They are these aircaft in the panoramic photo. 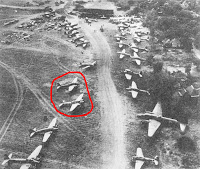 They can be seen in this photo.

And even better in this photo... 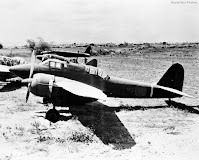 ...where almost all the aircraft in the circled area can be seen. 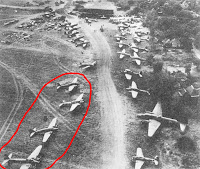 They are the above mentioned two "Toryu" on the top left, followed by a Ki-46-II and a Nakajima J1N "Gekko".
The video then takes a shot at the Mitsubishi G4M2 "Betty" on the opposite side of the above circled group.

It's this aircraft in the panoramic photo. 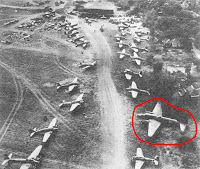 The photo below from Wikipedia shows the aircraft in great detail.

In case you have any doubts that it's the same aircraft, note that both the "Betty" in the video and in the photo above have a hole on their nose and they are ofcourse of the same type.
According to the caption the aircraft is "probably a G4M2a Model 24 Ko/Otsu" belonging to the 763Ku. FAOW identifies the aircraft as belonging to the 702 Kogekitai of the 763Ku and that it's a Model 24 either Otsu or Hei.
And, what do you know, it's the same "Betty" we found in the previous post.
This "Betty" was stripped of it's paint job and after substantial repair work from the TAIU...

...looked like this. Photo above from NARA, photo below from the Jeff Ethel Collection.

The next aircraft in the video is the "Gekko" we spotted above.

Followed by a "Hayabusa" not seen in the photo. Probably standing next to the "Gekko".

The above mentioned Ki-46-II "Dinah" can be better seen in this photo and although the tail marking has been erased, we can clearly say that it belonged to the 15th Sentai.

Here's another photo of the same aircraft, from the Arawasi collection. We can barely make out a tiny "タ" (TA) on the tail.