The second part of the clip presents more Japanese types. These are not seen in the panoramic photo of the previous post.
The first aircraft in the video is a Kawasaki Ki-48 "Lily" with a "Toryu" next to it.

It's a Ki-48-IIa, belonging to the 208th Sentai.
The unit was decimated during the battle for New Guinea, was reduced to transport duties during the Philippine campaign and operated only a small number of "Lily" bombers. Considering this, the color of the simplified white tail marking didn't indicate any particular chutai.
Overall color is "hairyokushoku" (gray-green) with green "madara" (mottled) camo applied by airbrush. Brown prop & spinner.

Note the Nakajima B6N "Tenzan" (Jill) in the background of the top photo. Here are two more photos of the same aircraft. 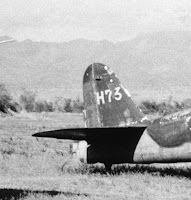 Another "Tenzan" found in the Clark Field area is the one below. It belonged to the 1001Ku.

In the background we can see the tail of the Ki-46-III "Dinah" we first saw in the previous post; the first aircraft that appeared in the video with the TAIU staff measuring etc. Here's a close up.

And here's a better photo of the same aircraft.

And another one from the Arawasi Collection.

Of particular interest is the Kokusai Ku-8-II glider in pretty bad condition in the background. Here's a close up.

But let's move on to the next aircraft seen in the video.

The still shows two old A6M2 Zeros. The one on the left can be better seen in the photo below.

The tail marking "341H-81" indicates that it belonged to the Sento 401 (fighter 401) of the 341Ku.
The inclusion of the letter "H" in the marking is perhaps an indication that the above mentioned "Suisei" could belong to that unit, although it would mean that the tail marking of the "Suisei" would look like this "341H73", which is particularly irregular.
The other A6M2 can be better seen in the photo below, I located here.

The unit did not have any chance to use their "Gekko" as night fighters, so they were assigned to recconnaisance and night ground attack roles.
The next aircraft  that can be seen in the video clip, is a very well known Nakajima Ki-44 "Shoki" (Tojo). Note that the narator in the clip says that it's a "Navy fighter".

It belonged to the 246 Sentai and has been the subject of numerous kits. Here are two better photos.

In the background of the video we can see the previously mentioned Ku-8-II glider and a "Hien" squeezed between them.
So, to recap, in this post we identified two groups (or should I say clusters?) of Japanese aircraft that were placed in the same area. There was one 208 Sentai "Lily", two "Toryu" on its sides, a "Jill" without tail marking in front of the "Lily" and a "Suisei" with tail marking "H73".
The other group included the "01-35" "Jill", an unidentified aircraft next to it, a "Dinah" Model-III facing them and, finally, a Ku-8 glider, a "Hien" and the 246 Sentai "Shoki" behind the "Jill". Let's also include the "Toryu" seen in the photo above in front of the "Shoki".
Unfortunately the two A6M2s do not seem to belong to either groups.
Posted by Arawasi

The Ki-44 is a very interesting subject - it seems as if the upper surfaces camouflage were in three colours. I know this aircraft but have never seen such a clear images of it. Where can I find a colour profile?
Thank you