The last part of the video again presents aircraft not seen in the panoramic photo.
All the aircraft are well known and have been released into kits.
The first is a Nakajima Ki-44 "Shoki" (Tojo) with the kana "も" (mo) on the tail.

There is a color photo of the aircraft showing the hinomaru overpainted in blue to avoid parts of it been taken by souvenir hunters.
This is how it looked when it was originally captured. 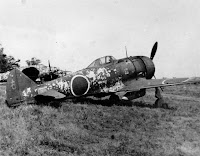 A number of "Shoki" fighters were found in Clark Field but there is a good possibility that the "mo" "Shoki" was restored to flying condition by TAIU and looked like this. It was given the code "S11".

The last aircraft in the video is a Nakajima Ki-84 "Hayate" (Frank) seen undergoing restoration and being test flwon by the TAIU.

Here's another photo of this aircraft from the Jeff Ethel collection. We can clearly see the code "S10" given by the TAIU.

I spotted the photo below here. 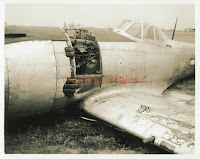 I think there is a good possibility it is the same "Hayate" having suffered a belly landing.
"Rising Decals" and "MaxModels" have released decals in 1/72 for these two and more TAIU aircraft and are available on our on-line store, HERE.

That last photo of the Hayate with the gun gas port exposed is interesting. Does anyone know of any photos of the Otsu variant with the same area exposed?