It is the Tamiya "Buffalo" kit with extra parts like the seat belts, the ground crew and the decals from Fine Molds.
The ground crew set is particularly interesting with many different options. For example, although tinny, they give different rank badge options and head gear. The ladder and the stool are especially welcomed. 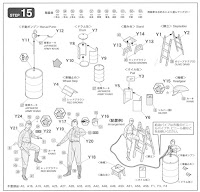 The separate "Painting & Marking" sheet, details four different schemes.
Two with markings from the unit that overhauled the aircraft in Bandung, Java. Another with markings of the Akeno IJAAF Fighter School.

And the last scheme showing an aircraft flown by the Utsunomiya School.

As before it's the Tamiya kit with extra parts like the seat belts, the ground crew and the decals from Fine Molds.
The ground crew and equipment set is again very interesting with a variety of equipment. Made me wonder if Fine Molds took notice of our "Japanese Airfields, Equipment & stuff" series on this blog. 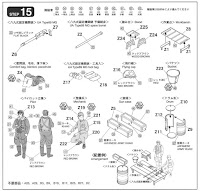 And the second of the 2nd imported aircraft flown in Kakamigahara.

Both kits are very interesting releases and the first time, as far as I remember, that Fine Molds cooperated with Tamiya. Price for each kit was about $US35.
Posted by Arawasi

I bought the Buffalo kit and love it. The crew figures and ground equipment originally came in their Ki-10 kit when originally released. The Tamiya Buffalo kit, though "old", still stands up very well after all these years. The box and packaging are also very attractive.