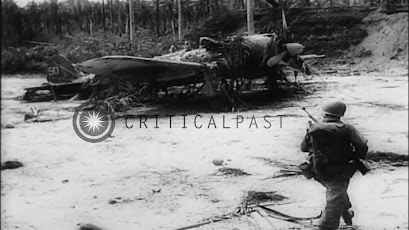 The unit was organized on February 25, 1943, in Hachinohe, Aomori Prefecture, with members from the 54 Sentai, 244 Sentai and the 104 Kyoiku Hiko Rentai, equipped with Nakajima Ki-27 "Nate" fighters. In the middle of April relocated to Sapporo in Hokkaido, then changed to "Hayabusa" from July 1943.

In November they were assigned to New Guinea and first moved to Tachikawa to change to new fighters, followed by a 2-week training in Akeno. On December 30 finally arrived at the Hollandia airfield with 28 (or 31) aircraft. After two weeks of training there the unit relocated to Wewak on January 13, 1944 where they were very active fighting in the Wewak and Admiralty Islands area.

There is some contrast difference between the white number "50" on the rudder of the aircraft in the video and the unit marking, so I'm leaning towards a 3rd Chutai aircraft.