If you care about historical accuracy and you don't paint markings yourself but rely on decals, here's what's out there on the Mitsubishi Ki-51 "Sonia".
Let's start with the 44 Sentai.
The unit was organized in July 1939 with elements from the 3rd Daitai, 18 Dokuritsu Chutai and the 45 Sentai. In September 1940, the unit was reorganized, the 18 Dokuritsu Chutai was reassigned and the 17 Dokuritsu Chutai joined in. The unit came to be organized with the 1 chutai being equipped with "Sonia", and 3 chutai with Tachikawa Ki-36 "Ida".
During the Battle of Changsha, in 1942 the unit was equipped with one chutai with eight "Sonias" and two "Ida" chutai with five aircraft each. So, in general the unit never had many aircraft in its strength.
The 44 Sentai used a small hinomaru with a white surround as its tail marking and various combinations of fuselage bands and tail curved lines and bands indicating different shotai and personal aircraft. The following illustration by Nohara Shigeru featured in Maru Mechanic shows one such aircraft from the unit.

There are a few videos featuring 44 Sentai "Sonias".
The first one is dated September 1941 and shows 44 Sentai "Sonia" attacking supply barges and shipping on the Yangtze River.
Although not of the best quality, we can make out the unit marking, the band(s) on the fuselage and on the tail.
The aircraft below in the foreground seems to have no band on the tail and a white and possibly yellow band on the fuselage. 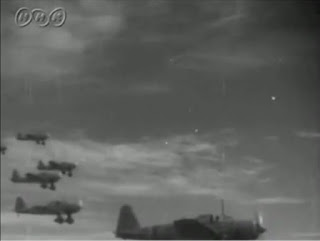 While this time the aircraft in the foreground has a white band on the fuselage and a curved red line on the tail. Note that all "Sonia" have the older shorter spinner. 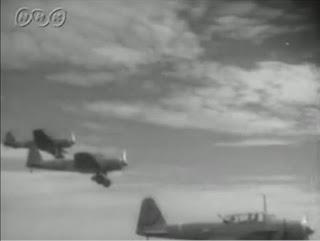 Another video dated October 1941, features "Sonia" and "Ida" attacking enemy positions during the Battle of West Hubei.
The "Sonia" in the begining of the clip taking off, has a thick yellow band on the tail and a white band on the fuselage. 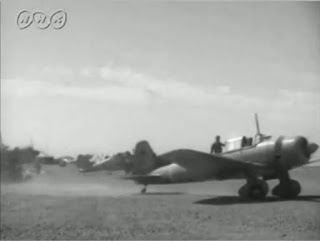 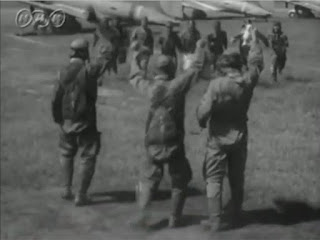 There are a small number of very high quality photos featuring 44 Sentai "Sonias". Let's see some close-ups.
Probably yellow (or red) bands on the tail, one red band on the fuselage of the plane in the foreground, two red one white on the plane in the background. 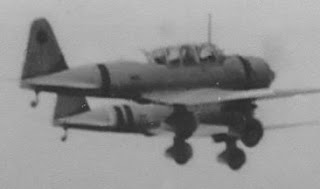 White and red band on the tail, white on the fuselage.

This aircraft is the subject of the Nohara illustration above.

Yellow and red band on the tail, but also notice the aikoku insrciption separating the white fuselage band.

No tail bands, only one white on the fuselage.

In the photos below there are two different aircraft. One with a yellow and white band on the tail, the other with a red and white band. Note that none of the aircraft in the clips or in the photos have fuselage hinomaru. 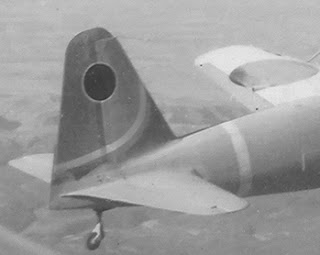 Based on the above photos, and most probably not having access to the news clips, Akimoto-sensei proposed in Maru Mechanic that the cowlings of the above "Sonias" had this curious paint job. You can find artwork on the net showing 44 Sentai "Sonias" with such cowlings, sometimes in red or black.

He also asserted that the some top areas of the wings were in white. Here's a photo showing the darker areas on the cowling and the white wing as well as the artwork. 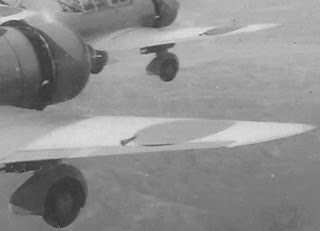 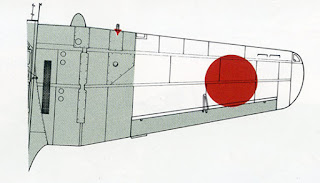 Unfortunately the cowling darker areas are just shadows. As for the white wings I'd like to present the following two very short clips.
Here's a still showing two 60 Sentai "Sally" bombers with white on their wings. Notice how uneven the white areas are on the port and starboard wings. 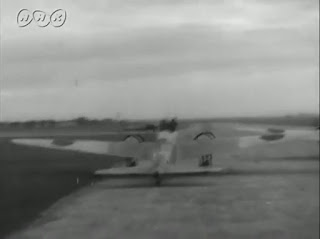 And the second clip.
The "Sallys" fly over Tokyo and they are from the Kumagaya school. 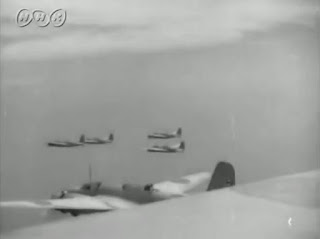 In this case all the top surfaces of both wings look white, but not the front of the cowling.
Based on the evidence presented in the above clips, I believe that unfortunately the 44 Sentai "Sonias" did not have any wings painted white but sleet or ice or something similar has turned these wings areas to look white.
As we saw in the previous post, Wingsy and Hasegawa have provided kits and decals for 44 Sentai "Sonias" with the above schemes and recommend the wings to be painted white. I leave it to the modeller to decide.
Ofcourse all these hairyokushoku "Sonias" with the multi-color bands were gone when the unit started applying camouflage on their aircraft. Below is an example from Model Art #533. 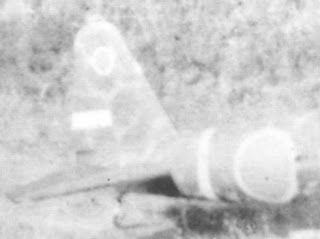 Below is a classic 44 Sentai "Sonia" with an aikoku inscription. 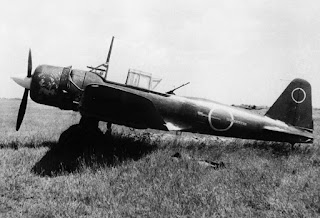 Rising Decals provide decals for this aircraft in their 1/48 set and recommend some short of a two-tone camouflage.

The particular aircraft is the subject of the box art of the much older Hasegawa kit in 1/72. 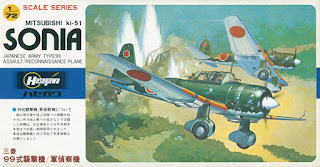 And is included as an option with accompanying decals. 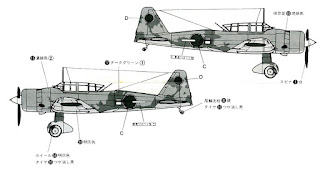 Here's a close-up of the above photo, of much higher quality and resolution. Call me conservative, but I do not see any major differences in tonality. It looks to me that the same paint has been applied with only a small variation here and there, very common to all Japanese aircraft that had seen combat. At best, perhaps the areas around the cockpit where the rear machine gunner climbed into the cockpit or were more weathered, were repainted with fresh paint and as a result they look a bit darker. But nothing as dramatic as Hasegawa suggests in the instructions above. Interestingly the nose of the aircraft is very weathered... 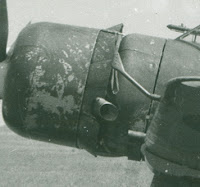 ...which I think supports my suggestion that the darker areas on  the fuselage and tail are just patches of fresh paint.
There is also this classic photo with blothes, a model of which you can build by using the tail marking of the Rising Decals set for the above aircraft. Let's remember that "Sonias" left the Mitsubishi factories always in overall hairyokushoku; never unpainted like the Kawasaki "Hien".
Note also that all the cowlings have not been painted with dark anti-glare paint, even the aircraft in the photo above. I have seen "Sonia" models with black cowlings and, unfortunately, this detail is not correct. 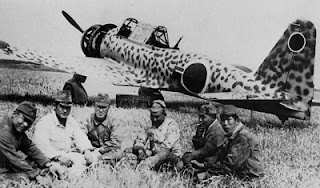 This is great. I was looking for information on this particular squadron as I have in my stash an old Hasegawa KI-51 with the "blotchy" 44 Sentai markings. Unfortunately the instructions were lost and the information here has proved valuable.

I would agree that with the assessment that the greens represented in the old Hasegawa kits should be fairly subtle and perhaps represent applications that are aged differently - such as from the effects of sun bleaching and rain.

I don't think I would agree with your conclusions on the white wings entirely. I would agree that it doesn't exactly look purposeful, meaning the wings were actually painted white. The frost explanation though doesn't make much sense. The upper surface of the wings are by design in flight at lower than ambient air pressure and here in direct sunlight, both conditions that would promote more rapid sublimation than the fuselage which is darker. Moreover it is clear that the ailerons were not really retouched to match as should have been if there was a meaningful reason for the 2 toned color. Maybe to the eye, the difference between those two shades was not that stark. These schemes are based on black and white photographs which are often biased with regard to actual shades - such as red being practically black. I've read in other sections how you note the gloss finish of the surface coats. I suspect that if the actual reflectivity of the surface varied, it could affect the appearance on film. How dirty were these engines? Could the difference be the result of field variations in gloss due to staining and weathering? I wonder about this last point as the edge definitely aligns with the wing crank and yet, it is a fairly soft delineation. A quick respray of new grey on the wings that photographs somewhat more starkly than it actually is? The effect might be similar to those old and new greens?

Thank you Zubie for the comment.
The "frost" suggestion was only that;a suggestion. Morning dew or some other weather phenomenon could be at play. Perhaps the crews had covered with canvas sheets the areas around the cockpit and engine (the most vulnerable ones) from rain, sun etc and the effect is similar to the 2-tone Zeros.
Your suggestion of fresh versus older paint is also very credible.
All this is an effort to explain what is seen in the photos apart from the "white paint" solution which is suspicious to me as I have never seen this in any other unit or aircraft. If only one aircraft had this "white paint" it could be a unit commander identification feature. But on 3 a/c? Something's not right here.
Thanks again.