Another quite well known "Sonia" is the one below. Photo from here. 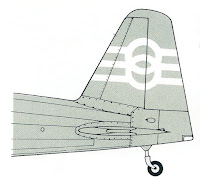 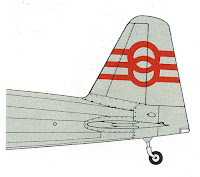 ...and the 89 Dokuritsu Chutai in yellow. 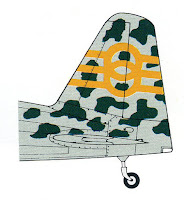 When the 91 Dokuritsu Chutai joined them it had the tail marking in "cobalt" blue. 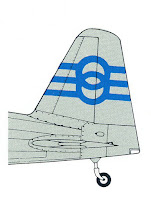 All artwork Nohara Shigeru, Koku Fan Illustrated #64.
The "Sonia" in question seems to have her tail marking in a color darker than the white of the surrender cross, therefore it is speculated that it was yellow. If that's the case, the aircraft was originally flown by the 89 Dokuritsu Chutai but at the time it was captured it was under the 83 Sentai. The fuselage band seems to me to be the same color with the white of the surrender cross.
As we saw in an earlier post the second Wingsy kit includes decals for an "83 Independent Chutai" "Sonia", but has the tail marking in white with a yellow fuselage band. In my opinion, both are incorrect. Not necessarily wrong because not many photos of the unit(s) have survived to know how every individual aircraft was finished, but if the Wingsy option is supposed to represent the aircraft in Keningau before it was captured, then the colors of the markings are wrong.
Rising Decals offers decals for this aircraft in their 48-029 "Guntei" Japanese Army Assault/Reconnaissance Aircraft Ki-51 "Sonia" in 1/48.

And Hasegawa includes decals in 1/72 in this kit.

A very interesting series of articles! I only have an objection concerning the white painted wings. It seems to me the demarcation line between the hairyokushoku painted areas and the white areas is too sharp -hence this should actually be a white painted area. This area looks like an anticipation of the white home defence bands adopted later on during the war. One explanation might be the japanese pilots' need to spot friendly aircraft at a glance while in action or something like that.

This is some great info!

But I have seen another marking for the 83rd - This is from the "Wings Palette" site. It says it is the "83rd dokuritsu chutai Circa 1941".

The image is taken from "Fighters Between the Wars 1919-1939 - Included Attack and Training Aircraft" by Kenneth Munson, The Pocket Encyclopaedia of World Aircraft in Colour, Blandford Colour Series, Blandford Press Ltd, 1970.

The artwork is by John W. Wood

Could you take a look at and tell me what you think?
Is it correct for the 83rd Sentai in 1941 with the 2 original chutais?
Or for the 83rd Dokuritsu Hikotai Headquarters?
Or is it totally wrong for any form of the 83rd?

Thanks for the reply. It seems odd that they used the same number for BOTH a sentai and an independent chutai. It could be confusing I would think. I wonder if their are other sentai/chutai numbers that are the same (not including those like the 47th that started as one and became the other).