In an earlier post I wrote about the "Sonia" "versions". Well, here's a well-known "assault version" "Sonia" found abandoned in Okinawa. You can clearly see that it lacks fuselage windows. Photo: NARA 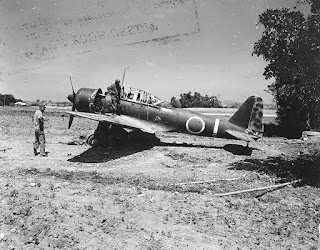 The unit is unfortunately unknown and it has no tail marking. But there are a number of smaller details that make this aircraft quite interesting as a modelling subject if you care about such stuff.
First of all, we can clearly see that the rudder is a replacement from another aircraft, as the camouflage pattern is not the same with the rest of the aircraft. What is less visible at first glance, is that the whole tail end comes from the aircraft with the blotches camo.

Another interesting detail is that the fuselage, white band which is not exactly perpendicular to the central line of the aircraft, is not a complete white band and I suspect it doesn't wrap around the fuselage.

Note also that the green camouflage is not perfectly applied around the fuselage hinomaru. It looks as if they were trying hard not to paint over the hinomaru, when the green top camo was applied,. This detail together with the not-uniform top camo, is a strong indication that the aircraft was originally hairyokushoku and the green camouflage was applied later at the depot, not the factory. 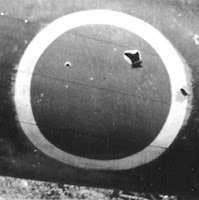 The canopy is also of the later type that slided rearwards. Since only few "assault version" "Sonias" were built and the sliding canopy was adopted from the #134th produced aircraft, I believe the whole canopy is a replacement. Note that it is in hairyokushoku without any camouflage.

Another hidden detail is that some parts of the cowling are from the aircraft with the blotches camouflage. 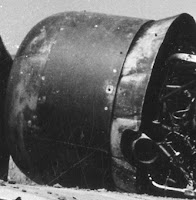 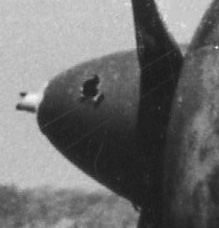 The undercarriage is in hairyokushoku but notice that the edge looks dirty, perhaps from dripped paint. 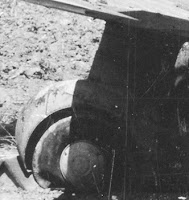 The top vertical surfaces of the port side of the tail look to be in green camouflage, but the top surfaces of the port main wing are not clear. Most probably green, but I wouldn't be surprised if the aileron(s) were replacement(s) from the blotches aircraft.
In general, I believe this aircraft is a very old one, perhaps taken from a school, with various replacement parts and field modifications to make it more front line combat worthy.
AFAIK there are no decals for this most interesting aircraft.
Posted by Arawasi

Any idea which Sonia units were at Okinawa at the time? I believe the 49 Dokuritsu Chutai was one, while a number of tokko units headed south to Formosa also stopped by Okinawa prior to the invasion in April as well

Sorry, that should be the 46 Dokuritsu Chutai

Hi Mike,
at what time? Before the Okinawa landings? Okinawa was mainly a stop-over island for aircraft going to Taiwan, the Philippines, Borneo, Indonesia etc. Also an emergency landing spot. All the units flying over Okinawa during the US landings operated either from Taiwan or Kyushu. So it's dificult to pinpoint the unit this aircraft might had belonged to.

Hi George, this U.S. intel assessment of the Japanese orbat prepared in the lead up to the battle says the "46th Independent Air Company" and a detachment of the "20th Air Regiment" were onsite https://www.ibiblio.org/hyperwar/USMC/USMC-M-Okinawa/USMC-M-Okinawa-V.html

Also, Japanese records list the Sekishin-tai that was formed from the 46th Dokuritsu Chutai sent seven aircraft on tokko missions from Naka against U.S. ships off Okinawa (two on the 27th and five on the 28th), so it seems to corroborate the intel about the unit being based in Okinawa.

Sorry Mike, I don't know about the "46th Independent Air Company" or the "20th Air Regiment".

Right. Unfortunately I still don't know anything about their involvement in the Okinawa campaign

No worries, at least we now know which unit is the most likely operator of this aircraft

Yea, it's not quite definitive but it seems like a good place to start from.

I only came across the 46th Dokuritsu Chutai when researching tokko units. All I have was that the the unit formed a tokko unit called the Sekishin-tai, and sent 2 Ki-51 against the invasion fleet on the 27th of March and five more on the 28th.

I didn't know the 20 Hiko-Sentai had a detachment at Okinawa until I came across the U.S. intel report. All I had known till now was that it operated the Hayabusa from Formosa during that time, and was involved in the Philippines in 1944 and took part in some tokko operations off Okinawa in May (and maybe April, I need to check)

Sorry, no idea about their tail markings

I'm not sure I understand the dedication to assign a unit to this particular "Sonia" when nothing can be definitive due to the lack of tail marking. As I explained Okinawa was a stop-over island and the aircraft could belong to any unit travelling from Kyushu or Korea to Taiwan and vice versa, had a mechanical problem and just made a stop to Okinawa.
As you probably know, there wasn't just one "Sonia" found in Okinawa. You can see photos and videos in older posts:
https://arawasi-wildeagles.blogspot.com/2017/06/okinawa-1945-colour-video.html
https://arawasi-wildeagles.blogspot.com/2020/06/ijaaf-ijnaf-wrecked-aircraft-23-okinawa.html

Not to mention that although the NARA caption says "Okinawa", this sometimes included the Amami islands. For the Kikaijima airfield check here:
https://arawasi-wildeagles.blogspot.com/2020/04/ijaaf-ijnaf-wrecked-aircraft-7-nakajima.html

So, in my oppinion, it's a very long shot to try to assign possible unit(s) to this particular aircraft.
Would it be "bad" to just say "we don't know"?

I'm sorry to have come across that way, because I was in no way trying to assign anything definitive, just pointing out that unit was in Okinawa and suggesting it's a possibility.

And I'm sorry if I sounded offensive. Don't get me wrong. I would be very happy to discuss and speculate on the identity of any IJAAF aircraft with a tail marking at a certain location. The absence of a tail marking or any form of identity of an aircraft at that location, is what I feel makes this particular exercise futile.
I would be much happier to discuss the identity of this "Sonia" for example:
https://arawasi-wildeagles.blogspot.com/search?q=Okinawa+Sonia