Our good friend Jan Kanov sent over a heads-up on a new release of their Mitsubishi Ki-51 "Sonia" in 1/48, by the Ukranian company Wingsy Kits, so I think it's a good chance to take a closer look at the markings and color schemes they offer. I have not owned a kit from this company so I will not comment on the quality of the plastic parts, their fit etc.
Although I have not communicated with them to confirm my suspicions, it is my general impression that Wingsy simply copied and tried to improve past "Sonia" kit releases without making any actual real research and, ofcourse, without having first consulted our Eagle Eye publication. Check HERE.
All Wingsy images are from their site.
Their first release was in 2019. 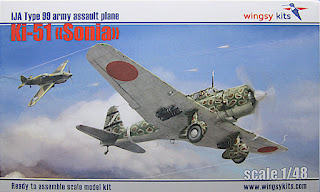 The box art is really stunning... 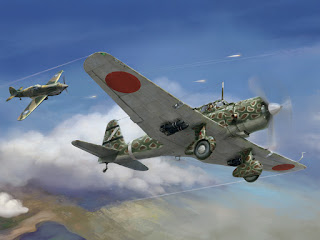 ...but unfortunately is incorrect.
It depicts an aircraft of the 27 Sentai, 1 Chutai which used a tsubame (swallow) as their chutai marking. Here's the artwork from the Wingsy site. 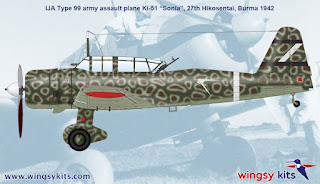 Arawasi was the first to feature this particular aircraft in issue #8, Jan-Mar 2008, of our magazine.
Mark Rolfe had created artwork depicting the aircraft like this.

Hasegawa obviously got hold of our magazine and released this kit

In the very next issue of our magazine we apologized for the mistake and included a rough illustration of how the camouflage should look like.
From the first publication of our Eagle Eye, we featured artwork by Watanabe Rikyu, no less, with the correct depiction.

The late Watanabe-san was particularly happy to create this side view especially for our publication. He had said: "I've created a lot of artwork of Navy planes for Bunrindo, so I'm happy to do this for you guys since it's a plane of the branch I served with".
The second option in the first Wingsy kit is the following... 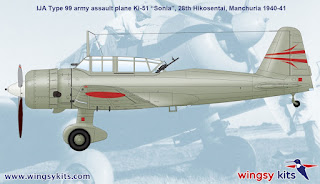 ...depicting an aircraft serving with the 28 Sentai.
Although Akimoto mentions that the 2nd Chutai unit was equipped with "Sonia" as well as Ki-4s and Ki-30s he explains that the marking was red with a white surround.
The third scheme is the following... 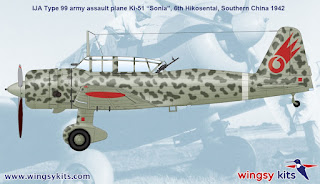 ...depicting an aircraft of the 6 Sentai.
According to Akimoto the unit was indeed equipped with "Sonia" but changed markings at least 4 times in their history. The particular marking was used from around 1943.
The last one is an aircraft flown by the Hokota Army Flying School, not the "Flying School Ibaraki". 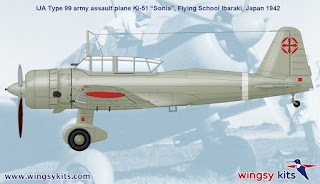 There are many photos of Hokota "Sonias" and therefore this particular scheme is perfectly correct although rather basic.
A more interesting Hokota "Sonia", and other interesting schemes and markings, can be found in the Rising Sun decal set 48-029 "Guntei" Japanese Army Assault/Reconnaissance Aircraft Ki-51 "Sonia" in 1/48. 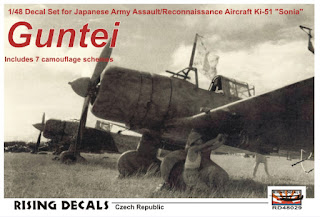