A very well known photo from the Ethell collection is the one below showing a very badly damaged "Sonia" found on the Hollandia airfield in 1944. The aircraft's serial number was #1240 (the source is a close-up photo showing the number on the tail). 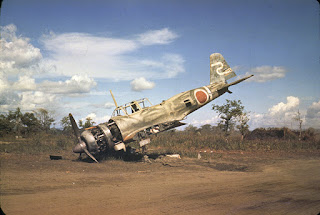 First of all, it seems that some on-line sources are confused regarding the "Sonia" variants and often talk about a "reconnaissance version" and an "assault version". In our Eagle Eye publication, we very clearly explained that the IJAAF did not decide to have two versions manufactured but only one that could perform both roles with very few field modifications. Only the first 11 prototypes and pre-production examples and a very small number of early production aircraft were finished as "assault". The main difference is that these early aircraft did not have any windows on the fuselage sides. Except these few "Sonias", all other aircraft had windows and could perform both roles without any distinction in the designation. The difference came to be because the IJAAF originally wanted a ground attack aircraft and after the above mentioned "Sonias" were built, decided that they wanted the aircraft to perform reconnaissance missions too. So instead of having two different types, they had only one type manufactured. Therefore, there were no Ki-51Koh, Ki-51Otsu etc.
"Sonia" was officially accepted as 99-shiki Shugekiki/Gunteisatsuki (Army Type 99 Assault/Tactical Reconnaissance Aircraft). Throughout the type's carreer there was only the Ki-51, until Manshu designed and experimentally built the Ki-71 with retractable landing gear and a more powerful engine (no Ki-71 photos have ever surfaced). I have no idea why some sites and message boards make such a big deal about the alleged "two versions" as if it's supposed to mean something special. Interestingly, nobody mentions the different canopy types and spinners, small improvements made to the original design that could also not justify the change of the designation. Anyway...back to the aircraft in the photo.
There is some uncertainty regarding the unit the aircraft served with. Most sources mention that it belonged to the 10th Sentai, some to the 70th Dokuritsu Chutai.
The 10th Sentai was organized on August 31, 1938, changing its name from 10th Rentai. In the begining, it was a light bomber and reconnaissance unit, but in the spring of 1940 it was reorganized as a light bomber and command reconnaissance unit with four chutai equipped with "Ida". On July 28, 1941, it was again reorganized with 10 Dokuritsu Hikotai Headquarters, 70 Dokuritsu Chutai with command reconnaissance, 76 Dokuritsu Chutai command reconnaissance and 74 Dokuritsu Chutai "Ida". The unit saw action in the Philippines, Solomon and New Guinea areas. In June 1943 it was yet again reorganized, returning to the 10th Sentai designation, including the 10th Dokuritsu Hikotai Headquarters, the 76 Dokuritsu Chutai and one chutai from the 81 Sentai.
The 70 and 74 Dokuritsu Chutai remained independent until the end of the war.
The unit marking is supposed to represent the Nen River where the unit was based at a nearby town.
When the 10 Sentai had all three chutai in its strength, the 1st Chutai or 70 Dokuritsu Chutai had the marking in white, the 2nd Chutai or 76 Dokuritsu Chutai in red, sometimes with a white surround, and the 3rd Chutai or 74 Dokuritsu Chutai in yellow. Japanese sources don't mention if the headquarters had any aircraft, their type and what color was their tail marking but traditionally it would be blue.
The Allies landed in Hollandia in April 1944, Battle of Hollandia, so based on the above, I believe that this particular aircraft most probably belonged to the 70th Dokuritsu Chutai, not the 10th Sentai.
There are some interesting details in the photo. First of all, note that the propeller blades are intact and not bent, signifying that the aircraft probably didn't make a forced landing. Note also that the port wing is missing. It is not roughly destroyed as you would expect from a bomb explosion, but removed at exactly the joint. In the photo below the same aircraft can be seen put up in an exhibition of shorts, of captured Japanese aircraft and we can see that the starboard wing is still there. Perhaps the port wing was canibalized and used as spares? Maybe, but many engine parts are still there. 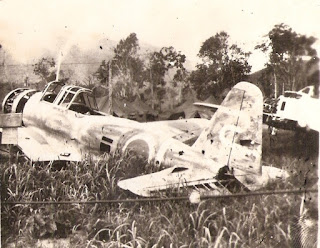 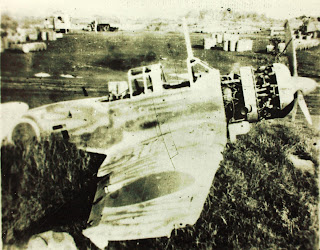 Nohara Shigeru has created artwork for this aircraft in the Maru Mechanic.

I think it's a most interesting subject for a model and a diorama.
You can find decals in 1/72 in this Hasegawa kit

I hope Hasegawa and Kora like our free promotion of their products and we would appreciate free samples!😀
Alexandros Angelopoulos from Greece has built a marvelous model of this aircraft in 1/72. 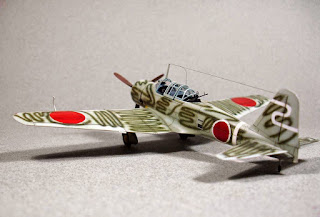 By "operated in the Philippines", do you mean it was involved in the 1941-42 attack? Thank you so much for any information!Your site is wonderful and so informative!