Hellcat vs. Raiden by Michael Thurow 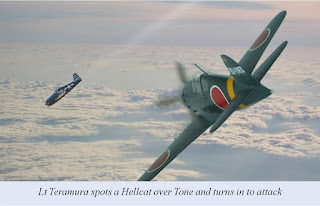 In my series of models that may have directly confronted each other in combat I would like to present today a pair of fighters that were involved in a battle over Chiba prefecture on 16/17 February 1945.
The Grumman F6F-5 is the Monogram 1/48 kit from the sixties (!) which I built in 1994 and upgraded recently with several aftermarket items such as a new engine, cowling, cockpit, landing gear, tank, HVARs, and other accessories. My model represents a fighter bomber of VBF-12 aboard USS Randolph. The pilot of this Hellcat is not known because the US Navy – like most carrier-borne air forces – did not assign specific planes to pilots (except for Group Commanders).
The Mitsubishi Raiden of the 302nd (Yokosuka) Kokutai is a buntai leader’s aircraft (yellow fuselage band) and was most likely assigned to Lt Teramura Junro, buntai-cho of the 1st Buntai. This J2M3 was lost on 19 April 1945 while flown by Lt(jg) Fukuda Ei. The victory was claimed by P-51 pilot Maj James Trapp, squadron commander of the 78th FS. A few weeks later, on 29 May,  Lt Teramura was shot down, too, and wounded by a Mustang at the hands of Capt Todd Moore of the 45th FS.

It may be interesting to note that a fully loaded Raiden weighed 1,500 lbs less than a Hellcat when empty. Their speed was about equal at around 330 kts (600 kph).
A build report and more information about my Tamiya model and its details can be found HERE:
References: Naval Fighters Number 92, Aircraft of the Aces 129.
The photo montage captions are imagined.

Cheers to all J-modellers
Michael Thurow - Germany
Posted by Arawasi

I'm amazed you got the old Monogram Hellcat to look so good. Both aircraft look very nice.

Yes, amazing work! Both aircraft look very nice and shows what can be done with older kits. I know the F6F well, I even have one in my collection now, and built the same kit twice during my childhood!