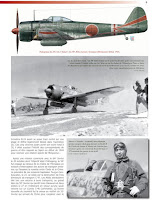 The British "Scale Aircraft Modelling" seems to have discovered lately that the Japanese flew aircraft too and in the latest issue, Vol.40 Is.09 Nov. 2018, there are three features on Japanese aircraft. One rather poor two pager on the Kawanishi E15K "Shiun" (Norm) featuring a nice RS model in 1/72 by Bob Foster, a much much more interesting 3-page piece on the Zero by Ryan Toews and a quite nice review of the new Tamiya "Hien" by Gary Hatcher.

Finally, a heads-up on the DEWOITINE D.510 in 1/48 released by the Ukranian Dora Wings, including hinomaru. As you may know Japan imported two samples of this type in 1935 to be tested by Mitsubishi. They arrived in September in Yokohama with French pilot Marcel Doret (Kiri commented that he looks like Porco Rosso). On October 7 the first flight took place in Tokorozawa and after that the type was test flown against IJAAF and IJNAF types.
Nice review here by Brett Green. Unfortunately the price in Japan of at least $US30 is a bit prohibitive for my wallet so unless I locate one on offer somewhere I don't think I will add this one to my collection.

Heads-up on the latest issue of "Flightpath" with an excellent article by Michael John Claringbould entitled "The Fatal Dark" dealing with the presence of "Gekko" night fighters in Rabaul. Not that many photos but very detailed and nicely written article.

Thanks for the heads up on these. Vol.40 Is.8 October 2018 of Scale Aircraft Modelling also has two articles on Japanese Aircraft. One of them on the Nichimo 1/48 Ki-51 and the other about the new tool Hasegawa H8K Emily. The issues appear on the news stands here in the US a month after their release in the UK so the October issue should be available any day now over here.

I don’t know if you’ve seen the Avions Hors Série - Les Hydravions de Chasse Japonais au Combat (in two parts), but I thought given your recent blog on this subject that it might be of interest.

Hello George,
in the last two years Bernard Baëza has been doing a series of articles on "Arawasi, les «aigles sauvages» de l’armée impériale japonaise" of which this is the latest article out. It started in April 2017 with N.217, and has been followed in the next 7 issues. After a few months pause the serie is continuing and this is the 9th part. I have found all of them well writte, informative and with a nice iconography. A mineworth for french speakers and those with limited or no access to japanese material.
You may contact the editors of the magasine (http://www.avions-bateaux.com) for past issues, they are all still available. The same for the two special issues on the fighter seaplanes of the Imperial forces (LES HYDRAVIONS DE CHASSE JAPONAIS AU COMBAT). By the way, they are the importers of Bunrin-Do, Maru and Model Art for France (I have no relation with them a part to be a satisfied customer).

Thank you all for the leads and the heads-up.