Pisto
In Japanese, often translated as "pilot waiting area",  is the place on the airfield, very close to the landing/take-off area, where the pilots gathered before take off. It's not an original Japanese word but I have no idea where it originated from. From the French "piste" perhaps but the meaning is different.
Do you know if there was something similar in airforces from other countries and what this area was called?
Below is a classic pisto photo from the Kumagaya school. The trainees gathered in this area waiting for their turn to get on the "Spruce" with the instructor. The on-the-ground instructors gave them the final okay and supervised the whole process. On the board the students wrote what routine they performed in the air and returned to their seats waiting for the rest of the students.

The instructors are sitting in the front row, the students in the back. Every instructor was responsible for about four students.

The students reported their name and routine, gave a salute and after a "yoshi" (good!, all right!) from the ground instructor they rushed to the trainers.

The next student is getting ready for his turn.

Students and instructors sit around a charcoal stove to keep themselves warm while training is taking place. 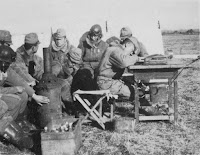 In this different pisto photo the officer responsible for the training routine is giving final instructions written on the board. This is a gathering of transport pilots flying parachutists so he explains how they will take off, what formation they will maintain, the exact route and the altitude they will keep from which they will drop the parachutists. 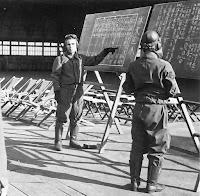 As can be seen in the photos above the instructors sat in folding chairs like the one shown below. 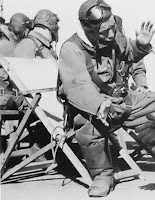 While the students sat on wooden benches. 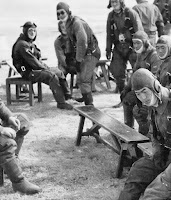 The on-the-ground officer responsible for the training usually sat alone in a folding stool with a wooden folding table. 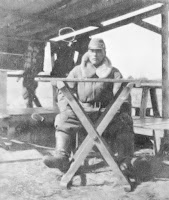 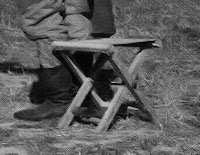 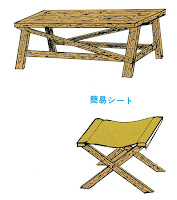 The pisto was present on all Japanese airfields. Apart from training as seen above, it was the area where pilots on stand-by duty were resting. Their fighter aircraft were very close and when there was a sudden warning they rushed and took-off in a few minutes. Depending on the season and the weather the pisto was under a tent of various shapes. In the photo below someone brought a couch for more comfort.

In the front line units, even on Japan mainland, pisto equipment included whatever was available. So often there were not folding chairs and tables but regular ones from the officer's mess. Pilots on-duty ate there or played board games like go or shogi to spent their time.
Note the parachute harnesses, helmets and other equipment hung from the tent edges for faster accessibility. 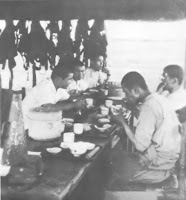 In the blurry photo below, the equipment, like gloves and helmets, is seen hanging from a rack in front of the pisto. Conditions in the pisto really depended on the unit, the weather etc. Sometimes there were no tents and the pisto was surrounded by canvas to protect from the wind. In winter though a heavier tent was usually used. In the photos in the bottom we can see different types of pisto tents. 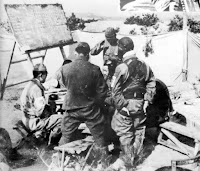 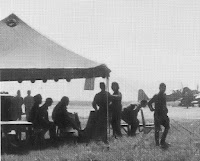 Although the pisto was a very important element of the Japanese airfield, I have never seen any dioramas attempting to replicate one. Too difficult?
Posted by Arawasi

Georges, thanks a lot for this survey of the IJAAF daily material, useful stuff for the dioramas fans!

in Italian there is a word "pista", literally runaway. But pista has a wider meaning and often refers to the areas in front of hangars, ramps, parking area, technical area and various spaces where, for example, maintenance goes on.
i.e. If someone looks for Lt. Astolfi, he can be answered "E' in pista" (he's on the ramp) which doesn't mean Astolfi fisically is on the runaway (maybe...attemping a take off open arms) but is "in pista" for some reason.
Personally I do not think there is a relation between "pisto" and "pista": in wartime the interaction between Italian and Japanese personnel have been very scarse to justify such a possibility... or, maybe has the presence of Fiat technicians on japanese airfileds led to some cultural and linguistic exchanges?

In french one of the meaning of "piste" is runaway lane in airfield area.