Before you say that all the models I submitted are boring two-toned, here's my quickly finished Nichimo "Sonia" in 1/48. As before, I could continue working to improve the model for a few more hours but wanted to finish it ASAP and don't miss today's sunshine after last night's typhoon.
A few words about the unit first.
The 64th Shimbu-tai a.k.a "Kokka-tai" (National Flowers) was organized on April 1, 1945 at Hokkota and was equipped with Mitsubishi Ki-51 "Sonia". On May 26 the commander of Hokkota Kyodo Hikoshidan MajGen Imanishi Rokuro named the unit during the send-off ceremony. The tail marking was designed by schoolgirls of a high school near Haranomachi airfield. The arrow was chosen as it goes in only one direction and never returns and the cherry blossoms as the classic symbol of shimbu-tai pilots.
After flying to Taisho airfield in Osaka, the unit continued to Metabaru airfield, Shaga Prefecture. On June 9 advanced to Bansei airfield, Kagoshima Prefecture, and two days later took off on their last mission. The 1st shotai with four aircraft and the 2nd shotai with three attacked ships in Nakaji Bay, Okinawa while the 3rd shotai (exact number of a/c unknown) attacked ships around Kadena. They  were accompanied by one "Hayabusa" from the 44th Shimbu-tai and one "Nate" from the 215 Shimbu-tai. All in all nine members of the 64th perished in suicide attacks.
About the model.
I encountered a number of issues. Fitting was overall very good except for the landing gear the pieces of which just didn't want to fit smoothly. I replaced the terrible exhausts with tubes cut from cotton swabs. The tail wheel also sucked and I replaced the main rod. The major issue was the two landing lights in the middle of each wing. Nichimo didn't offer anything there so I decided to cut the area, fill it with styrene, add a small piece of extra plastic sometimes found on the end of a piece on a kit tree, which had exactly the shape of a light and then struggle with the transparent cover. Initially I tried plastic warmed and shaped in hot water but gluing it caused a mess. Kiri had the idea to use clear sticker film and it worked as a charm. This was done after the camo was applied so it didn't end up as nice as I would have liked but couldn't do much without ruining the camo.
The camo. There are two photos showing the "Sonia" of this unit, found on p. 146 & 147 of MA#451. There is also artwork done by Nohara Shigeru.

A close up of the p.146 photo shows the plane in the foreground with a difficult to discern camo pattern and the plane right behind in a madara (spots, mottled) camo pattern. 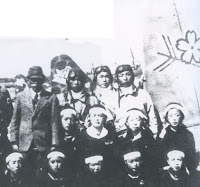 Just when I decided to do that plane and started painting the camo I discovered on-line a better quality version of the photo. It seems the plane in the foreground is in a light overall color (light brown or MrColor #304) but the plane behind it has definitely darker (dark green) blotches.
My first try to recreate the camo was with stripes of blue tack and it just didn't look as good as I would have liked. Instead a made a rough outline with a soft pencil directly on the model then went free hand with the airbrush in very low pressure. Naturally there was a halo around each blotch but after a few passes with a very very fine nail file the excess halo was gone. I hope you like the result.
Another area was the bomb attachment. There are no clear photos but according to sources the tokko "Sonia" had their under-fuselage windows filled and since there is no hard attachment point on "Sonia's" belly, a sheet of metal was attached, most probably welded to the main spars. I made some logical assumptions (the sheet must cover the windows without being too wide, too narrow or too thick) and the result is not bad at all. I used a spare 250kg bomb and attachment points from a Hasegawa "Hayate" kit. I didn't use the wing guns as these were removed from the tokko "Sonia" to save weight. I kept the rear machine gun though as a means of in-flight protection.
As always I used Mr. Color paints, Mr.Color #128 for the overall, Mr.Color #16 for the camo.
Now that I know the difficulties of the kit I will definitely build more "Sonias"; waiting for the new kit by Wingsy! 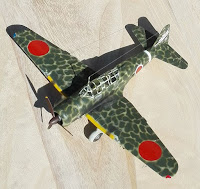 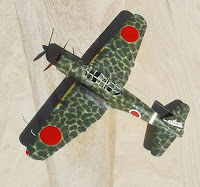 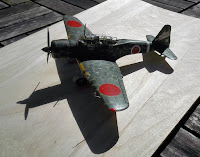 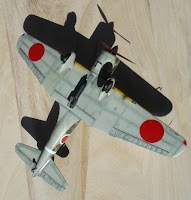 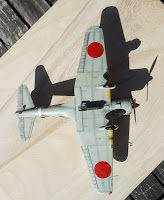 Looks really good! Odd the Nichimo didn't provide for the landing lights. Hopefully the Wingsy kit is accurate in shape and detail.

I wish Tamiya, Hasegawa or Fine Molds (or even Airfix, etc.) would come out with a new kit with the detail and quality of Tamiya's new Ki-61 in 1/48.

I wonder if we'll see the Wingsy Kit? There hasn't been any updates in a long time.