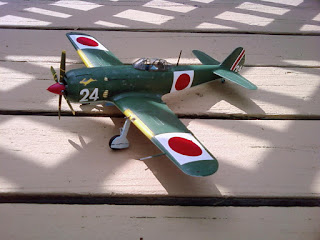 I built this kit a number of years ago and it still looks pretty good. It was the first Japanese aircraft that I attempted to build, so there are a few of inaccuracies, the most notable the yellow identification strips on the leading edge of the wing need to extend further towards the fuselage. 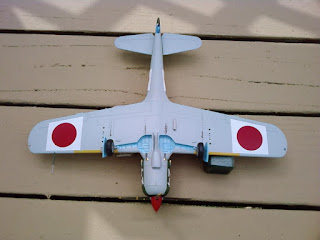 The kit is the Tamiya 1/48 scale Nakajima Ki 84-IA, and the paints used on the fuselage were Tamiya AS series sprays of the appropriate hues with Testors enamels used for the interior, prop, and landing gear detail. 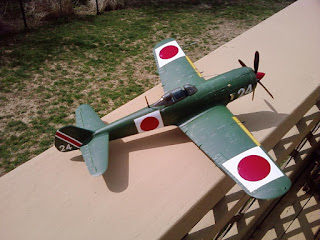 It's an out of the box model, and I decided on using the markings for Staff Sergeant Joten Naito of the Kurai Unit, 502 Temporary Interception Corps based at Nakatsu Airfield from March-May 1945. I realize it's not on the same level as many of the finished models that appear on this site, but it was a blast to build and still looks good a number of years after completion.
If any one can let me know more about Staff Sergeant Joten Naito, I'd love to learn more regarding the history of the pilot.
- Will Silk, USA -
Posted by Arawasi

A reasonable effort, even if a bit too clean for my liking. 4.2

Being that this is the Tamiya kit (actually 1/50 scale), I will give this effort some extra credit as I know how difficult a kit it is to work with. 4.3

Not bad. Hard to build these oldies.
Note 4,1

I agree with everybody else. 4.2