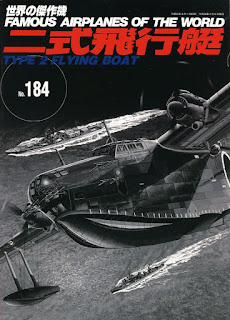 Artwork: Ninomiya Shigeki, Suzuki Yukio
Published by: Bunrindo, May 2108 pb, in-print
Pages: 88, Size: 18X26cm Photos: 141 (35 in color)
Very happy to see another Japanese aviation subject in the FAOW series and I love the many clear color photos of the sole surviving "Emily", especially those of the interior but that's the only good thing I can say about this new FAOW.
This is not the first FAOW on the "Emily". The previous one, FAOW #49 was long out-of-print. 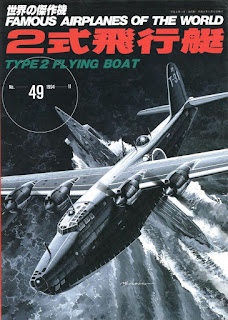 Title: Famous Airplanes of the World #49 - Type 2 Flying Boat
Author/artwork: Nohara Shigeru
Published by: Bunrindo, 1994 pb, out-of-print
Pages: 88, Size: 18X26cm Photos: 149 (21 in color)
So naturally I will compare the two publications. Starting with the artwork, Nohara's is much much better, especially the spread-out which is no longer there in the new FAOW. Although I appreciate the side view of the "Emily" prototype the artwork of #184 looks too digitized and unrealistic, especially the planes with the green camo. I suspect something went wrong with the printing process.
Photos. As mentioned above the color photos of #184 are superior and much more detailed. Very helpful to modelers who want to detail the interior of their new Hasegawa "Emily". Although the AeroDetail #31 on the "Emily" has many more color photos of the restored "Emily", I find the #184 color photos of much better quality. A combination of the two would be the best.
Vintage photos. #49 had 63 wartime "Emily" photos, #184 has only 41. So obviously some are missing. Furthermore the quality of some is much worse in the new book than the older, with noise here and there. And to make matters really frustrating, the full page clear photos of #49 have been substituted by long articles (in Japanese ofcourse) entitled: "development and use of the aircraft systems", "flying boats in comparison", "from "Emily" to the Shinmaywa US-2", "Japanese Navy flying boats in action", "technical problems of flying boats and the evaluation of US Navy". The main source for the last one was an article written by Robert Mikesh which appeared in the September 1965 "Koku Fan" issue. And actually this new FAOW looks more like a collection of magazine articles than a proper FAOW.
FAOW#136 on the "Pete" was really amazing, this one is simply...meeh. Get it if you can't find the old one but you don't need it if you have Aero Detail #31 (which is available from our on-line store, here).
Disappointing, Bunrindo!
Posted by Arawasi

Sort of sad when the new edition is worse than the original.....

I will say, too, that the Aero Detail books cover a given subject well.