Yesterday we were extremely fortunate to be present in a rare event at the Tsukuba Kaigun Kokutai Kinenkan (more in parts 1, 2, 3). It was "Saiun" day! 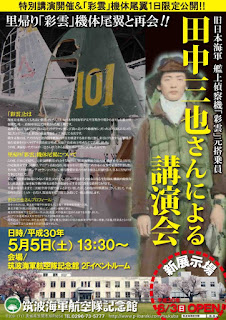 For one day only, the tail of "21-101" Nakajima C6N "Saiun", was brought from Misawa Aviation & Science Museum to Tsukuba KaigunKu Kinenkan to be closely inspected by the public, courtesy of Onodera-san.

The particular aircraft was found badly damaged on Tinian island and belonged to 121Ku.


Some interesting details are the yellow paint drops on the tail, the aotake on most of the interior surfaces and the red brown primer under the green paint on the metal surfaces. Also, note that the yellow tail marking were painted over a previous white marking which was "雉-101" (kiji-101) the original marking on the 121Ku which was known as "Kiji unit" (kiji=green pheasant). This land-based reconnaissance unit was organized on October 1, 1943 at Katori base, Chiba Prefecture with Yokosuka D4Y "Suisei" reconnaissance and then changed to "Saiun" from May 1944 receiving the first and second pre-production aircraft. In February 1944 moved to Tinian Island and changed their tail marking from "雉-" to "21". On May 15 the unit had three "Saiun" in Tinian and one in Katori base. From June 1944 took part in the A-GO operation (Battle of the Philippine Sea) where they lost all their aircraft and on July 10 the unit was disbanded. The "21-101" was the fist pre-production aircraft. The bottom tip of the tail is covered in fabric and is painted simple gray. This would mean that the undersides of the aircraft were either hairyokushoku or NMF. To my eyes, the green of the tail was very close to Mr. Color 129 (IJA dark green Nakajima). 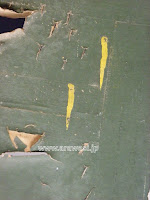 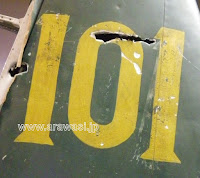 The tail was accompanied by a part of a pre-production "Saiun" observer's instrument panel, a piece of fabric and an engine cowling flap which was painted in very dark black with a hint of blue. 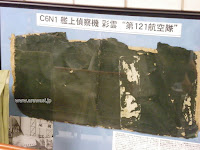 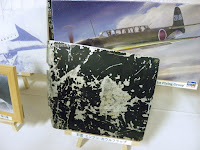 And that's not all. Kojima-san contributed a whole display of IJNAF instruments and uniform pieces and Nakamura-san brought a tail piece of Zero-sen Model 21 Hokokugo-515 which was recovered in the jungle of Guadalcanal. 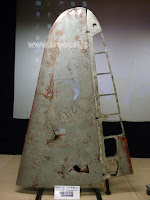 And finally we were treated to two incredible hours of reminiscences by 92-year-old Navy observer Tanaka Mitsunari who had a very colorful career serving with many units including the 151 and 141 Kokutai with which he flew "Suisei" and the 343 and 171 Kokutai flying "Saiun". 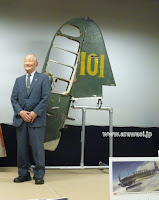 From his most interesting speech, in a crowded room, I was particularly impressed with the part where he flew reconnaissance missions in the Philippines guiding Navy kamikaze aircraft.  Tanaka-san explained:
"I don't think I ever met anyone who actually wanted to serve with the Kamikaze. I remember a kamikaze Zero pilot who dropped his bomb, returned to base and then was ordered to take off once again on a suicide mission. His face showed he wanted to say something but he stayed quiet and begun tying another bomb to his plane. I asked him "what's going on?" and he replied [loose translation] "I have the skills to fly bombing missions and hit the enemy just fine. Why do I have to kill myself flying a suicide mission?"
Every time Tanaka-san was taking off on a reconnaissance mission and spotted a US ship or other targets his thoughts were "Oh, more kamikaze pilots will have to die" but he had to do his duty and report the enemy positions. Tanaka-san, who became a member of a kamikaze unit himself, also mentioned that he never met anyone who volunteered for their country or for the Emperor; most joined for their comrades in arms.
Tanaka-san released his memoirs in a book published by Kojinsha. The title is "Saiun no kanata he" (On the way to Saiun).

A most memorable and enjoyable day for all Japanese aviation fans who were there.
Oh, and by the way, the Tsukuba Kaigun Kokutai Kinenkan is now safe and will not be demolished thanks to the efforts of all the volunteers.
Posted by Arawasi

George, I have so enjoyed this series of posts. How fascinating it must have been to hear that veteran's stories! It's gratifying to know that there are some, at least, in Japan interested in preserving a record of that period of their history. We read and see so much, in the West, about how many Japanese seem not to want to look at the early to mid 20th century at all. Except, maybe, for the atomic bombings.

I'll echo what Harold K. said, I think preserving history is something that should be done. So much can be learned from it. From what I have heard, in Japan much of the war is glossed over, preventing a full understanding of what happened. However, it's through understanding that we can prevent repeating the same mistakes. (Something that applies to every nation) Very glad the Tsukuba Kaigun Kokutai Kinenkan has been saved!
What Tanaka-san said was very insightful and thought provoking.

Fascinating post! Tanaka-san's memoirs would make an engaging read - any chance an English translation is in the offering?