This is my finished 1/48 Hasegawa Nakajima "Saiun" model, depicting the first prototype just a few weeks before her maiden flight on 15 May, 1943. Many thanks to my good on-line friend George Eleftheriou whose help and support during the build was more than valuable.
Panagiotis Koubetsos 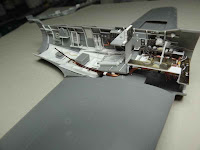 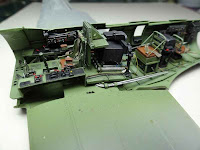 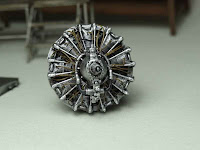 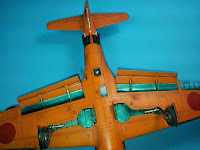 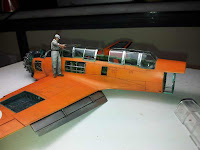 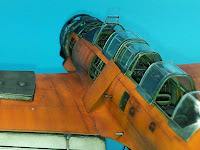 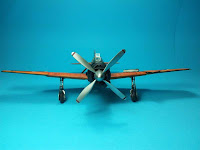 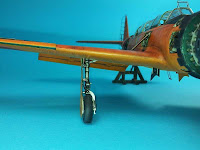 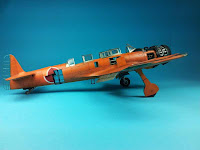 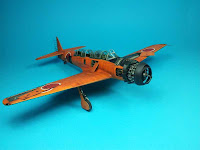 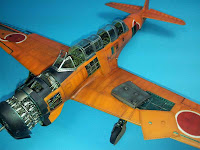 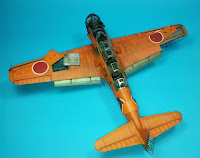 Here's one more "Nell" photo from a vintage magazine undergoing maintenance. Model 22, G3M2-b. Nice details of the engine and the prop.

A rather interesting photo from a vintage magazine.
The propeller without spinner and the long cowling air intake indicates that this is either a Model 21 G3M2-a with the two retractable turrets or a Model 22 G3M2-b with the big "turtle back" turret without spinners. Possibly Genzan or Mihoro Kokutai (date and location unknown).
Note the combination of two 60kg and one 250kg bombs and the 2-tone top camouflage. Quite puzzling is the way the fuselage hinomaru looks as if the lower part has faded or is washed-out.

Here's a close-up of the bombs. Emilio in his comment was wright, the 60kg bombs are indeed three. According to FAOW#91, p. 28 this configuration (3X60kg, 1 or 2X250kg) was common during operations in the China theatre. Note their different colours.

TTomcat shared with our blog some of his very interesting what-if "Nipponki '46" models. 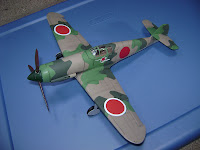 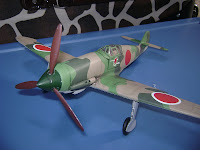 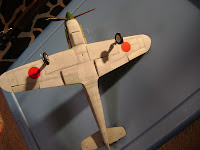 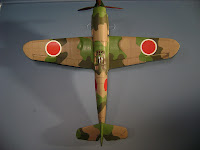 Just finished this today! (13/7/2012) Its far from perfect. I got an old beat up 1/32 109 that was missing the cowling and canopy. A big restoration project ensued but I soon ran out of steam and could not figure out what to do after stripping the paint. I didn't want to take parts from another fresh 109 to make it work and I didn't want to cast anything either. I planned to make it a Radial for some time but then realized that a P-38 prop and spinner from another project fit the bill, and the "Mike" was back on! So I used styrene to bolster and cover the gaps and used a 1/48 Raiden canopy cut to fit. (radians have big canopies so its not too small for 1/32) The wash on the underside is not that hot, it was still flat and not glossed so when I washed it stayed!!  Used fine sand paper to get some of it off. Its painted with Rattle bombs.  Finished with some pastels and the decals came from the spares box. SWMBO helped me apply them because she is the best!
So the "Mighty Mike" is finished. Its kind of odd looking, I can't decide if it looks like a LaGG or P-40 or Ki-61 or 109... I do like it though. It sure looks Japanese to me! TTomcat 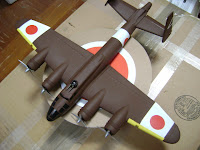 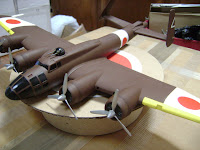 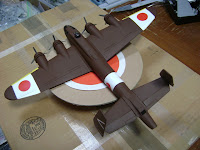 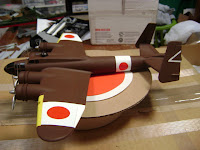 Bought this B-17F from Cliffy B and I noted that this old 1/72 Revell kit really does not look like a B-17  :blink: So I cut out sections of the wings to save shelf space (for the back story it is meant to make it faster!) Lengthened the engine nacelles with 1/48 F-14 Exhausts (which also added some much needed detail) And then cut the fronts off of the 1/48 engine faces for the spinners on the props. The tail fins are from an old and busted 1/48 A-10. It was supposed to be a quick project but like all my builds took longer than expected! TTomcat
Posted by Arawasi 1 comment:

The artist is Mukai Junkichi and the title is "Air battle (Shoki Suicide attack)". Google the name of the artist!
Posted by Arawasi 1 comment:

A busy May 1938 day in Kasumigaura Kokutai. The "Akatonbo" are leaving the hangars en masse taking advantage of the clear skies.
Apart from the uniforms of the ground crew members and the pilots, of interest is the color of the trainers. Silver overall with red tails with the tail code repeated on the fuselage side in black as well as the top of the top wing and the bottom of the bottom wing. Curiously the "Willow" with the registration "カ (KA)-726" does not seem to have hinomaru on the top wing and the tail code looks to be yellow.
Note how clean the planes are indicating perhaps a new batch.
An alternative and colorful solution if you want to avoid the "yellow-orange" vs "orange-yellow" "debate". 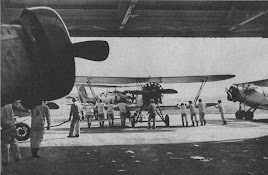 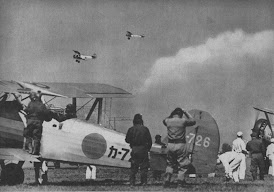 A rather interesting photo from a vintage magazine showing the cockpit of a Mitsubishi G4M. Of interest is the puzzling box behind the co-pilots seat on the port side. We think it's an intercom box. Check p. 96 of "Japanese Aircraft Equipment" by R. Mikesh. The navigator seems to have the microphone on. 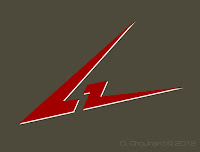 The tail marking of the 52nd Sentai was based on the Latin numeral for 5 "V" placed sideways with a "2" integrated. Artwork: Devlin Chouinard
The unit was organised on April 28, 1944, in Osaka and was equipped exclusively with Nakajima Ki-84 "Hayate". All unit pilots were fresh from the Army aviation schools and even the high ranking officers had no fighter airplane training but were brought in from other specialities (bomber, reconnaissance etc). From May 5, the unit was based in Ashiya airfield in North Kyushu spending most of their time training and performing local air defence duties.
On the same date the unit was organised, a higher formation the 16th Hikodan Shireibu (HQ Air Brigade) was also organised including the 51st and 52nd Sentai. Since the 52nd didn't have any officers to actually train the pilots, the CO of the 16th HS Lt. Colonel Shindo Tsuneemon took over training of the young pilots.
From June of the same year B-29 raids commenced in N. Kyushu. During an August 20 air raid, 15 planes took-off and managed to shoot down one bomber. The same night there was another raid and the unit took-off but didn't spot the enemy and during the difficult night landing, sentai CO Major Uchinori Takayuki and wing commander Captain Awane Itsuo lost their lives.
In September, the unit received orders to advance to the Philippines which they did on September 26, with about 40 aircraft in the unit's strength. On September 29, after various accidents and misfortunes they finally arrived in Luzon's Del Carmen airfield where they came under the 4th Kokugun, 2nd Hikoshidan (4th Army, 2nd Air Division).
On October 15, 1944 US carrier aircraft attacked the Manila area and the unit took-off to intercept. Sentai Commander Sawayama Yoshitaka and pilot M. Sgt Takahashi Takeo claimed one each with the rest of the unit claiming eight enemy aircraft shot down.
During the afternoon of the same day, the whole 16th Hikodan took-off to escort the IJN flying in the East as as 500km over the sea, something unusual and extremely dangerous for IJAAF planes and pilots. The whole unit fought with the enemy claiming 15 planes hot down with the loss of seven of their own. Shindo shot down one. The drop tank of one pilot of the 3rd Chutai, Sgt Morisawa, suddenly fell off leaving him without any return fuel left. He decided to return to the battle scene alone and crash on an enemy warship.
The unit continued daily intercepts in the Manila and Clark areas fighting hard, downing enemy aircraft but also loosing many of their own. By October 23 the unit was left with only eight aircraft. On October 24 the Hikodan with about ten planes advanced to Saravia airfield on Negros island.
On October 26 a report came in that at Tackloban airfield there were more than 100 enemy planes. The 52nd received orders to attack with Ta-Dan incendiary bombs. Eleven planes took-off and dive bombing from 5000 meters managed to destroy more than half of the aircraft on the ground loosing four of their own.
By November 5 1944, the unit was left with no aircraft. On November 10 the unit was unable to use Saravia airfield and returned to Luzon. Three days later Sentai Commander Sawayama, the Commander of the 51st Sentai and other survivors took a transport to fly back to Luzon but they were probably shot down and were lost.
On November 21st, the 16th Hikodan received an order to return to homeland and by December 10 the unit managed to return to Shimodate, Ibaraki Prefecture, where it was reorganised with new pilots and aircraft, becoming responsible for the air defence of Tokyo.

52nd Sentai "Hayate" wrecked at the end of the War. NARA.
On February 16 and 17, US carrier aircraft attacked the Kanto area (here) and the unit managed to shoot down more than ten aircraft loosing a number of their own.
On May 19 a most unfortunate and rather bizarre incident occurred. The 16th Hikodan received orders to reconnoitre the Izu Penninsula area looking for enemy planes. More than 30 Hayate from the 52nd took off from Shimodate and failing to spot any enemy planes tried to land at Akeno. From the 30 aircraft only one (!!!) managed to land in Akeno due to mishaps. The very high rate of accidents made the CO furious but also showed the precarious condition the Hayate were at that stage of the War.

Another 52nd Sentai "Hayate" at the end of the War most probably found in Chofu airfield. NARA

On June 10 B-29s attacked the Kanto area but this time they were escorted by P-51s and although the unit claimed three enemy a/c shot down they lost three of their own too. The final base of the unit was Chofu airfield from July 1945 until the end of the War when the unit had 30 planes and corresponding number of pilots.
On August 24 the unit made their last flight and four days later held an end-of-the-War ceremony.
Posted by Arawasi No comments:

A photo from a vintage magazine. A Mitsubishi F1M "Pete" and a Nakajima E8N "Dave" right before taking off on another mission somewhere in the South Pacific.
I have not seen many photos of "Dave" floatplanes operating in the South Pacific from seaplane bases or islands. From warships yes, from islands not many.
From the hills in the background location seems likely Malaguna Beach, Simpson Harbor, Rabaul. Luca Ruffato 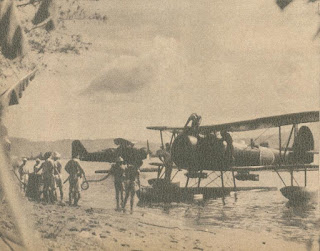 Just back from Yogya after an excellent but regretably short 5-day trip. We had a fantastic time thanks to the amazing hospitality of our friend Sinang Aribowo (MATUR NUWUN!!!) who showed us around not only the most enjoyable Dirgantara Mandala Museum where a Mitsubishi Ki-51 (Sonia) and a Nakajima Ki-43 "Hayabusa" reside (photo below) but also around Yogya where we had the privilege to sample some of the most exotic and delectable food ever. If in Indonesia do not forget to try the flavoursome "SOP KAKI KAMBING"*. 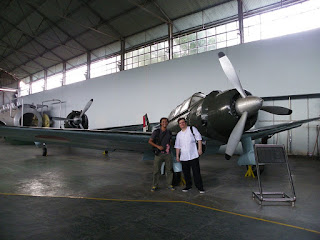 On April 17, 1936 the governor of Shandong Province in North China, Han Fuju (second from right, here for more) visited Battleship Nagato escorted by Commander of the Combined Fleet, Admiral Takahashi Sankichi (third from right, here).
Perhaps the Navy guys can spot lots of interesting small details but for this blog of interest is the two reconnaissance floatplanes most probably Nakajima E4N2 in the background. 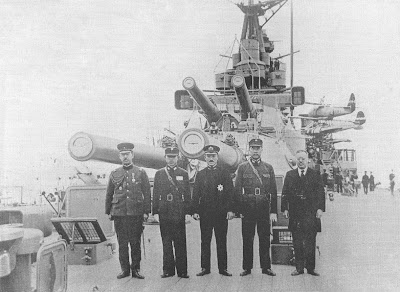