The clip today, from here, was taken in Yokosuka. The first shows the U.S. Marines landing on the seaplane ramps, right in front of huge mostly undamaged hangars, obviously full of aircraft, unfortunately not visible in the video. 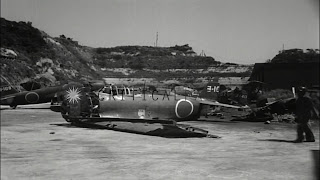 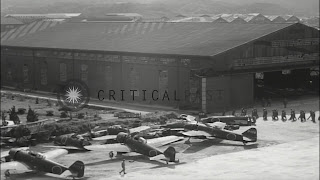 In the next still, right next to the "Willow" we can see, again most probably, an A6M2-N and then certainly a Kawanishi N1K1 "Kyofu" floatplane. 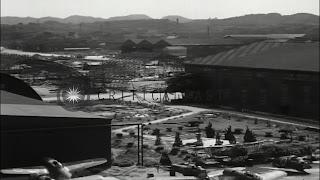 Finally we see again the upside down "Shiragiku" and this time the tail marking is (almost visible) "Yo-860(?)". 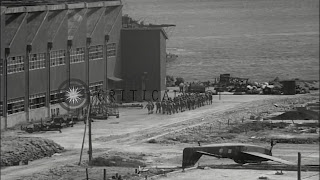 Three videos (!) today, one in color, taken at the Sasebo Naval Arsenal at the end of the war. The aircraft featured in the videos are a number of Mitsubishi F1M "Reikan" (Pete) belonging to the Sasebo Kokutai.
Source for the above video, here

Source for the above video, here

And the least famous of all three:
Source for the above video, here

There are two very good NARA photos showing in very good detail these "Reikan" and we have presented a detail of one of them with information about the unit in a previous post, HERE.
Check also the beautiful model by Pat Donahue, HERE.

I also recently discovered the quite interesting photo below from here, with a very interesting account of the occupation of the area. 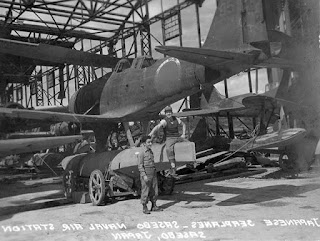 There was also a variety of different types of floatplanes, some in better, some in quite wrecked condition. The Kyushu K11W "Shiragiku" in the photo below, from here, with the surrender white overall and the green crosses, comes as a surprise, but notice the Kawanishi N1K "Kyofu" tail with the marking "SA 951-12" behind it.

There are two quite nice NARA photos taken in Sasebo showing a variety of wrecked aircraft, mostly Aichi E13A "Jake" and "Reikan".

Note that the "Jake" has a tail marking of "サへ" (SAHE) which indicates that it belonged to SaekiKu which was organized on February 15, 1934, based in Saiki, Oita Prefecture, the ninth kokutai that was organized by the IJNAF, originally to patrol the Bungo Channel between Kyushu and Shikoku. In the beginning it was a flying boat unit but from October of the same year started operating seaplanes and from April of the next year, carrier fighters were also added to its strength. Later carrier bombers, carrier attackers and patrol aircraft were also operated but in the beginning of the war the unit had only carrier bombers. At the end of the war the unit had only reconnaissance seaplanes. 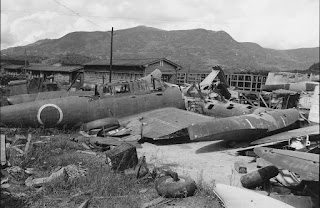 I recently discovered these two more photos taken in Sasebo, from here. 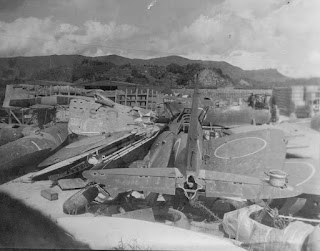 Note the U.S. aircraft wing part and there is a discussion in the source link, whether this particular aircraft was one of those during the Doolittle Raid. Keep in mind that the Japanese had captured a variety of U.S. aircraft in the Philippines and in China, so I'm not sure we can conclude with any variety of certainty that this particular aircraft (whatever the type could be) was a Doolittle one.
Posted by Arawasi 6 comments:

Today's video in color (!) of admittedly not so good quality features a variety of interesting IJAAF types. The video from HERE, starts with a Nakajima Ki-55 "Ida", the cockpit of which can be seen at 00:20. Then we can see an interesting Mitsubishi Ki-51 "Sonia" belonging to an unknown unit. After a variety of closeups and wide-shots, the cameraman chose to show us, at 53:00, a very rare shot of a Mitsubishi Ki-109 followed by not that clear shot of the cockpit and much better views of the tail machine gun.

There are two NARA photos taken at the same place and at the same time. According to the NARA caption, the location is the airfield of Kurume, Fukuoka Prefecture.

In this wide shot we can see various Mitsubishi Ki-51 "Sonia" and Tachikawa Ki-36 "Ida" and/or Tachikawa Ki-55 trainers. The "Sonia" sport a variety of tail markings of un-identified units, but most probably belonging to tokko groups.

And here's the finished model. The rendition of this well-known aircraft is the result of a search for the two hull colors. I followed one of several theories / conjectures, that the paint had faded due to sun exposure. I decided not to follow the color scheme suggested by Hasegawa. I hope you like the result

The following construction photos show the application of WET transfers. The set is full of tiny details. The following photos are after applying a wash which is a new thing for me, so I tried to be decent.
Next I tackled the engine cowling. The drilled exhausts looked like a princess crown. So I started their improvement and the result is more than satisfactory! On the cowling came a couple of deck guns and as usual, they were made by injection needles, with great results.
Unfortunately, I made a novice mistake. A friend of mine said that I had the wrong color behind the pilot's head. And I realized it immediately, it is a machine from the Mitsubishi factory!!!!!! So, I reworked the headrest column. I'm happy with the result, although it probably will not be seen at the end, but it does not matter. The last thing I had to think about was how to do the navigation lights. I mean the little monsters on top of the wings. I guess someone in the future will release something to exact revenge on the modellers who spend hours and effort to make them look good from scratch. Finally I went ahead and grinded the shape of a tear from a clear parts tree. I hope you like the result. And that is the end of this fairy tale.