MODEL ART just released a brilliant brand new publication entitled "Nihon Riku-Kaigunki Dai Zukan" or "Imperial Japanese Army & Navy Airplanes Illustrated Book #1". It has 170 pages full of illustrations by the well-known duo of Sato Shigeo & Sato Kunihiko. The late Sato Shigeo (father) was a Navy veteran while Sato Kunihiko (son) is the illustrator and co-researcher and both have released the other Model Art title "Nihon Kaigun Kokutai Gunso To Sobi (MA #655)" (Aviator Uniforms and Equipment of the IJN)  (here) and are regualr contributors to Model Art monthly magazines.
The "Zukan #1" publication is a collection of these monthly magazine contributions and covers in great detail a wide variety of technical IJN & IJA aircraft subjects like cockpit and instruments, engine, wheels and wells, fuel tanks and a lot more. The aircraft types covered are a bit random (Zero, "Raiden", "Toryu", "Hien", "Seiran", "Renzan" among others), there is no English and there are few vintage photos but there are colour photos of surviving relics when possible and the illustrations are so finely detailed that makes this publication invaluable for modellers and aviation historians.
Note that this one is not part of any series. The number is Model Art #927.
TOTALLY RECOMMENDED!!!
Avialable from our on-line store HERE, together with other out and in print Model Arts.

The following very interesting information and photos were sent for our blog from Miro Herold:


One Nakajima E8N1 Dave was in service on board the auxiliary cruiser “Orion”. The fuselage insignia were overpainted with fictitious RAF roundels and white serial number L 5196.
On May 26, 1941 there was an accident during take-off and the E8N1 with pilot Oblt. zur See Klaus von Winterfeld and observer Oberflugmeister Pässler sunk in a position east from Madagascar 18°52’ S and 51°06’ O.
A second Nakajima E8N1 Dave was ordered from Japan for the auxiliary cruiser “Stier” as replacement for the two Arado Ar-231. The Germans found that they were not suitable for the kind of service they wanted them since the engine could not be started once on water. The German supply ship MS “Tannenfels” then loaded only one E8N1 from Yokohama and cruised back to the Atlantic to meet the “Stier”. On September 25, 1942 finally the two ships met in the South Atlantic and the German team was able to take a look at the seaplane. Upon close inspection the seaplane was declared as in bad condition and therefore unsuitable for front-line service. "Stier" didn't take the plane and stayed on MS “Tannenfels”. Two days later, the “Stier” was sunk after a sea battle with the armoured Liberty ship “Stephen Hopkins”.
Question: what happened to the "Dave" on board "Tannenfels"? 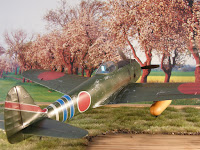 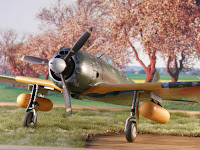 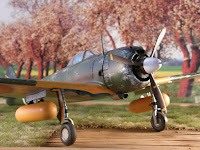 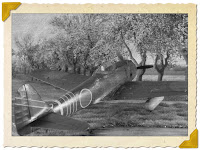 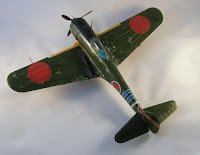 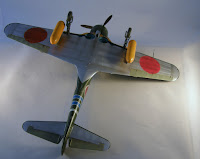 One more video from the NHK collection featuring Nakajima E8N "Dave" seaplanes in action. According to the commentator, seaplane units based on Yangtze river operate against targets in Hunan and Jiangxi provinces. The ground crew members prepare and bomb-load the seaplanes for one more mission against junks sailing the river carrying provisions and enemy positions in Jingdezhen, Jiangxi province. The video was shot on August 26, 1941.
I hope David can identify the unit from the tail marking.
Posted by Arawasi 9 comments:

You didn't really think we'd just post photos from Hasegawa's site, right? Here's a very close look of the kit. Crisp and very fine details especially in the cockpit, the engine and the main float. Can't comment on the decals and the paint options yet. More on that soon.
Very special thanks to Hasegawa for the pre-production review sample. 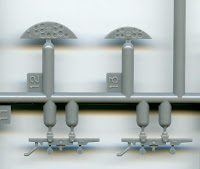 It's finally out and it looks absolutely amazing!
Price is about $US40 but we will have more details about our special discount price very very soon. 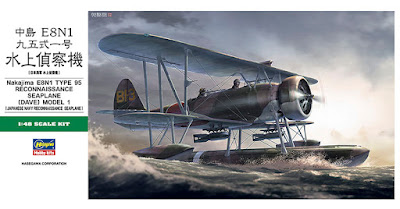 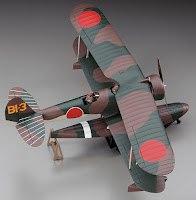 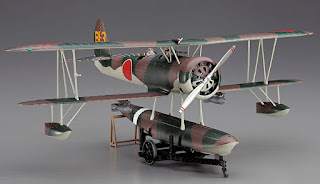 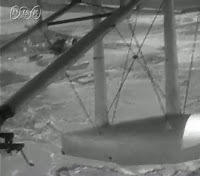 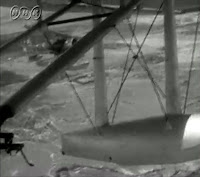 A NARA photo featuring and IJAAF starter truck found by US forces in the Philippines. Standard equipment for fighter aircraft units was to have one starter per plane while for reconnaissance and bomber units the ratio was one starter truck per three planes. 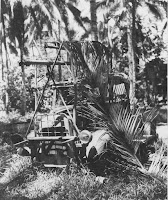 QUESTIONS
Mike Czibovic sent the following email:
Dear Arawasi,
Can you tell me if anyone has figured out what the "clover leaf" marking on that 244 Sentai Ki-61 is really supposed to be? Were there any eyewitness accounts that could verify it was a shamrock or clover leaf? Google search was no help. The only known photo is at an extreme angle, so I stretched it in Photoshop to see what it might reveal (see below). It looks to me to be more like an eagle grasping something with its talons. Any thoughts?
Just curious 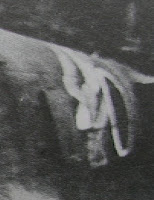 Let's see.
The subject is a very well-known one and favourite among modellers for many years because of the unusual marking. The only primary source can be found in the book "Broken Wings of the Samurai" by Robert  C. Mikesh, Airlife, 1993. It's only one photo and the caption reads:
"Victory markings on Japanese aircraft were no more uncommon than on American aircraft of the Pacific War. The quantity on this "Tony" seen at Chofu was worth recording through Jim Gallagher's camera. The custom was to credit the aircraft, as well as the pilot since few had their own assigned aircraft. This "Tony" was painted a "chocolate bar" brown all over, with unusually brilliant red Hinomaru insignia. Most remarkably, a large "Kelly-green" Shamrock was painted on both sides of the fuselage. These brightest-of-green shamrocks were bordered in white. The vertical tail surface had the insignia of the 244 Sentai painted in white, and a five-inch band of white around the fuselage in front of the tail surfaces."
I will not post the photo here respecting the copyrights of Mr. Mikesh and the publisher, but if you visit here you will see the photo and some cool cg artwork.
Below is some nice artwork I found here, typical of most depictions of the aircraft. 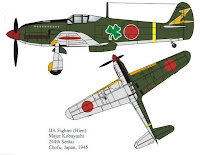 Illustrations of the "Shamrock Hien" have been featured in virtually all the publications on the "Hien", very often with small inaccuracies.
First of all, the most current publication, Model Art #733, features an illustration with the captions explaining that the aircraft is a
"Ki-61-I Tei 244 Sentai 3rd Hikotai Mikaduki-tai (sic, should have been "Mikazuki"), flown by Lt. Chuichi Ichikawa, Chofu, Tokyo, Japan, April 1945"
If the accuracy of eye-witness and photographer Gallagher is beyond any doubt then first of all the aircraft should be chocolate brown, not green and the 244 Sentai tail marking aas well as the fuselage band should be in white as he clearly mentions, not as shown above and in virtually all the illustrations I have seen.
Many illustrators make the mistake to add the fuselage Ho-5 20mm cannons. In the original photo the fuselage cannon troughs are covered indicating that this aircraft probably belonged to a ramming unit.
The "shamrock" or "clover" marking is possible but it should be clear that it is the plant "katabami" (oxalis corniculata check the Japanese wiki entry for better images) which was and is still used in Japan as a family crest (kamon). The particular plant is very strong, propagates easily and once it takes root at a place it is extremely difficult to destroy. All these properties are symbolized in the family crests featuring the "katabami". A problem that arises though is that "kamon" are almost always black/white. 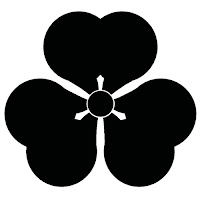 A few years ago I read in a Czech magazine (Revi No. 42, article by Martin Ferkl. Thank you Miro) an article discussing the "myth" behind this particular aircraft. One of the problems mentioned was about the direction of the B-29 kill markings, pointing upward instead of the typical downward. As you probably know I do not want to use the word "myth" but it seems there are more issues with this particular aircraft without necessarily discrediting the photographer's testimony.
Sakurai Takashi-san, who runs THIS site and is the leading authority on all things 244-Sentai related, has expressed his doubts on this page and I hope he has no objections summarizing them as follows:
1. Lt. Ichikawa Chuichi the "Shamrock Hien" is credited to flew a Model 1 Hei (7.7mm machine guns on the fuselage), not Tei, and this particular aircraft, which was destroyed during a night ramming attack on April 15, had killing but no other personal markings.
2. the killing markings look weird in many ways. First of all is the position they are applied. Killing markings were painted in areas where ground crew members had easy access and stable footing, like the cockpit side or the tail of the plane, not on the nose. Perhaps a ground crew member was standing on a ladder when he painted these but still their position is rather unusual. The other problem is that the B-29 images are in freshly painted white and the arrows look like they are painted with crayons. And they are very different from the killing markings applied on the aircraft of Commander Kobayashi.
3. When a 244 Sentai maintenance crew veteran saw the illustration with the "shamrock" immediately commended that there were no aircraft with this marking in the unit.
4. The angle the photographer has taken the photo is also unusual. Where was Gallagher standing? Perhaps on another aircaft? And if the "shamrock" was that unusual why didn't he choose to shoot that instead of the killing markings from that strange angle.
All things considered, Sakurai-san believes that the killing markings and the "shamrock" (if it's actually there) were applied by US personnel and they were not original Japanese unit or personal markings and I agree with him.
HTH Mike.
Feel free to email us your questions and requests.
Posted by Arawasi 6 comments:
Newer Posts Older Posts Home
Subscribe to: Posts (Atom)