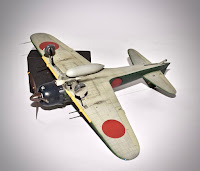 Northern Virginia Scale Modelers hosted their annual model show and contest in Fairfax, Virginia on Saturday, April 20. Fairfax is minutes away from Washington D.C. This show is a large event with many vendors, contest entries, and models on display. Japanese aviation did have a presence on the display tables, but entries seemed "light" as compared to past years. 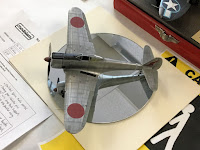 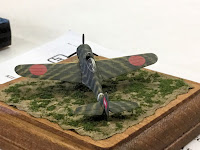 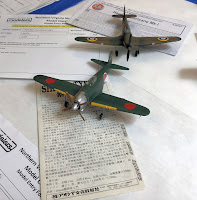 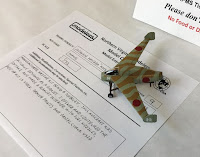 When it's spring in the old country, it’s about time to take outdoor pictures of some models! So Just for fun here they are!
- Jean Barby -

Last weekend we managed a grand display on four tables at the annual Shropshire and IPMS Telford scale model show at RAF Cosford. Gary Stevens said this will be his last time managing the event and he did us all proud as did the members of both clubs and the museum staff. Five of us had models on the table, Bill Anderson, Paul Bebbington, Richard Brooker, Robert Foster and I. Andy Binks, Frank and Penny Hayes and Simon Phillipson were at the show as well.
We certainly filled the tables. We had so many lovely comments from people and staff alike and, of course, being able to display beneath two sole surviving famous WWII Japanese aircraft really does make the display a bit special.
Here are some snaps. 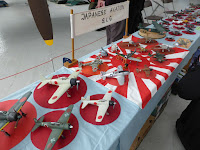 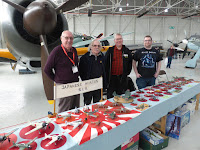 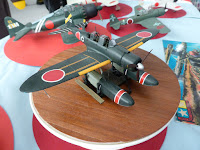 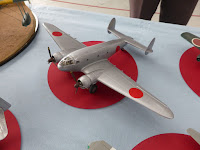 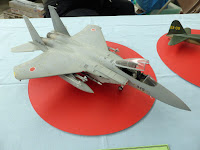 The April 1958 issue of “MARU” magazine featured an interview, more like a free discussion, of four Kawasaki designers.
1. Doi Takeo
2. Kitano Jun, Kawasaki Designer
3. Imachi Isamu, Kawasaki Research Department
4. Sakai Iori, IJAAF Headquarters Research Department
The title of the piece was “The background of Toryu Development” and here are some extracts.
Doi: The “Toryu” didn’t start as a night fighter but as a twin seat, heavy fighter.
Maru: What was the aim?
Imachi: Before we start working on the design of the “Toryu”, there was the Ki-38. That was still an idea.
Doi: This assignment was given in December 1937.
Maru: From the Army?
Imachi: The concept behind the heavy fighter changed from the time we started with the Ki-38. The bombers became faster, their service ceiling too became higher. Normal fighters could do combat against other fighters but gradually it became impossible for them to fight against bombers. So, the concept of heavy fighter was born. But there was still no strategic concept and various ideas were created. One of these test ideas for a heavy fighter was the Ki-38. The basic proposal was to design a heavy fighter capable of doing what the single-seat fighters couldn’t, like having extra range, high speed and exceptional horse power. That’s how the concept of twin-seat fighter was born. Even though we were not sure if the concept would work, other countries started building prototypes. In any case, in Kawasaki, we wanted to test research the concept. The Army was not yet sure what they wanted to do until they gave the order for the Ki-45. Until that time Kawasaki had built only aircraft with water-cooled engines. Around that time the NACA cowling for air-cooled engines came about, bringing the performance of this type of engines on a par with the liquid-cooled ones. Maintenance for air-cooled engines was also easier and Kawasaki gave it a try with such engines. Furthermore Kawasaki had experience only with single-engine designs; no experience with twin-engine aircraft. But a little later the Ki-48 was also built.
Around that time, retractable landing gear was common in overseas aircraft designs but not in Japan. So, we decided to give it a try. We knew that the necessary oil pressure system had been developed in the US but we were not sure if it could be made in Japan. So, we started by putting to the test our own ideas. In the beginning it was a manual system but was a failure.
Maru: So the landing gear retracted by hand?
Doi: Soon after take-off we turned the handle by hand like crazy...
Imachi: We installed heavy armament on the heavy fighter. Originally there were no machine cannon designs available to install so we used a design for tanks. But it was way too heavy and was difficult to install.
Doi: The damn thing was more than 130kg!
Imachi: Another novelty was the rear machine gun position. Until that time the reconnaissance aircraft had a rear machine gun but the gunner had to stand up and use their body to swing it, causing excessive wind resistance. So, considering we were aiming for a high speed aircraft we decided to build something new. That was also another new easy-to-use plan of ours. All these little things were incorporated in the new Ki-45 “Toryu” design. In Kasawaki we didn’t built it with mass production in mind but more to test various ideas.
We installed Nakajima Ha-20 engines. That engine was of small size with fairly satisfactory performance. When we were building the “Toryu” prototype there was no available engine yet. Flight tests are more about the engine so we couldn’t exactly do the kind of tests we wanted.
Posted by Arawasi 1 comment:

MosquitoCon is sponsored by the New Jersey IPMS and is held each year in Wayne, New Jersey. This model show is in its 28th year and typically draws a large number of model builders from the Northeastern United States. There were not many Japanese subjects on display this year.  Entries overall appeared to be very "light", compared to previous years. Perhaps the warm spring weather had an influence on this?
Enjoy the small selection of photos. 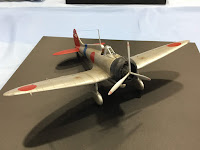 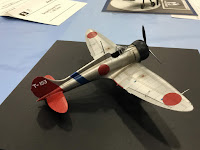 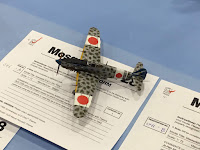 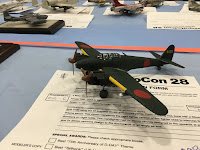 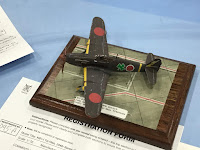 In the previous post Harold K asked:
"Are the wheel wells of the Suisei correct, painted in the same gray as the undersides?
This rather than aotake or some other color?"
Personally I cannot say with absolute certainty what the color (or colors) of the wheel wells and covers of ALL Yokosuka D4Y1 "Suisei" (Judy) was (the official painting instructions have not survived AFAIK) but in the vast majority of photos it seems to be a bright color very similar to the rest of the undersides. The photos below are proof of this. 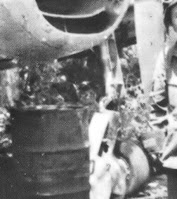 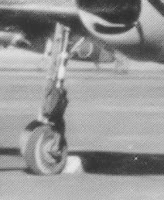 ﻿
The two photos below in particular are very clear.


Nevertheless a very small number of aircraft seem to have these areas painted in a darker color as shown in the photos below. My take would be blue/green "aotake" but I don't think we should exclude the cockpit color. Photos in a US report of a destroyed "Suisei" also show the wheel well doors in a darker color.


The best and latest publications on the subject are the two DNK books, available through our on-line store, here. Unfortunately they are all in Japanese.
So, if you want my take, I would say it can go either way with the underside color more probable if you don't have original photos of your modeling subject. The curator of the Yushukan, Mr. Suzuki, was very friendly, very knowledgeable and most helpful. He has spent hundreds of hours with the aircraft going through every nook and cranny and you can feel the love and interest he has to be as accurate as possible. In a fairly recent overhaul they were most thorough  and corrected various details that were applied in haste during the original restoration, like for example the size of the fuselage hinomaru. The aircraft still has secrets but I felt they were doing their very best.
Posted by Arawasi 1 comment:
Newer Posts Older Posts Home
Subscribe to: Posts (Atom)