Steve Mundt sent over a link to the post below (from here), posted by "johnbr" as a follow up of the older post on the Japanese Focke-Wulf Fw 190 originally posted on this blog, HERE.
Japan’s Butcher Bird
In 1943, the Imperial Japanese Army imported a single Focke-Wulf Fw 190 A-5 from Germany.

The plane was shipped over via submarine. It was tested comparatively with other native fighter aircraft of the time, and Japanese Bf 109 E-7.
Lieutenant Commander Aramaki Yoshitsugu, one of the test pilots, noted the superiority of the Focke-Wulf’s acceleration compared to the Japanese fighters. However, its maneuverability was terrible in comparison. Despite this, the control surfaces were highly responsive. The armament of four 20mm cannons and two 7.92mm machine guns was unmatched by any Japanese plane at the time.
Aramaki observed that the cockpit of the Fw 190 was not as comfortable as that of Japanese aircraft, but much more spacious than the Bf 109 E-7. The aircraft was quite solid and pleasant to fly overall. The flight performance was closest matched with the new Ki-84. Noted was the very high reliability of the plane.
It was of Aramaki’s opinion that the Focke Wulf was superior to both Bf 109 E-7 and the American P-51C, which was acquired in 1945. Warrant Officer Takezawa Toshiro thought that Ki-61 was a better combat aircraft than Bf 109 E-7, while Focke Wulf was better than the latter due to its reliability. He viewed P-51C as the best of all these aircraft.
When questioned of the fate of the aircraft, Aramaki stated that he thought it was loaned to a reconnaissance unit and knew no more. This was the last I could find on the Japanese Fw 190.
That is, until I recently came across this photograph in an American intelligence report. 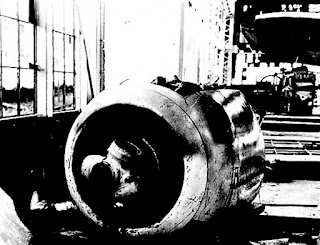 I believe this is the first time this image is on the internet. It is captioned as follows:
“German engine from Focke-Wulf 190 fighter found in an experimental building at Kagamigahara. This was studied as a model in adaption of Tony from liquid-cooled to radial-engine installation.”
The remaining camouflage paint is matched, and it is clear what happened. The Fw 190 A-5 was acquired by Kawasaki in time for the development of the Ki-100 (radial-engine Ki-61) at Kagamigahara by late 1944. The aircraft was disassembled, and observed as an example for the installation of the radial engine Ha-112-II in the quite slim fuselage of the Ki-61.
At the end of the war, the remains were located by the American occupiers at Kagamigahara’s experimental hangar and most definitely scrapped.
Thanks Steve!
Posted by Arawasi

Interesting post, and I thought about the tactics the Germans used. From what I have read, they tended to zoom in, hit hard and then disengage to reset for the next pass. (This is what Erich Hartmann liked to do.) The Fw-190 was most likely made to suit this tactic.
Japanese pilots were used to a turning fight, from what I understand. So many variables go into making an effective pilot/plane combination and people will continue to argue over which was best.
It is very interesting that Aramaki considered the P-51 to be the best of the three...