Another "Sonia" found in Hollandia is the one below. Image combo from pinterest. 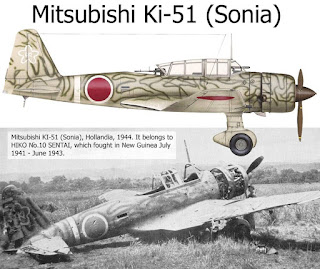 There are a number of good quality photos of the aircraft in the SDASM Archives.

The flag is a personal item of a Japanese soldier. The top reads "buun chokyu" (wishes for a long-lasting good luck in battle). Flags like this were signed and/or included good wishes by family members, friends, fellow soldiers and others before the soldier left Japan to go to the front. More well known are the senninbari. A rather sad "trophy" most probably taken from a dead soldier.
Anyway, back to the aircraft...
One more photo from here. 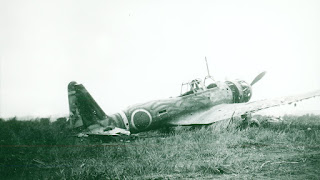 Although the pinterest combo mentions that the aircraft belonged to the 10th Sentai, the unit has actually not been identified beyond any doubt. We saw in brief the history of the unit in the previous post so the only possibility the 10th Sentai suggestion is correct is if the "Sonia" belonged to the hq of the unit and if the hq used a tail marking different from the rest of the sentai; rather unlikely. And as we saw, it is not even known if the hq of the 10th Sentai had any aircraft.
Nohara suggests that it might belong to an un-identified independent chutai but that's as far as he goes. When we were working for the first print of our Eagle Eye, I asked Akimoto-sensei and he couldn't identify the unit either.
The unit marking consists of a sakura (cherry blossom) and a symbol in the middle that is very similar to the military symbol for "communications" as can be seen in the tail marking of the Rikugun Koku Tsushin Gakko (Army Flight Radio Operators School) in Mito, Ibaraki Prfecture. (artwork: Zygmunt Szeremeta)

Therefore, we believe that the aircraft belonged to a small liaison unit.
Note also the small white line on the rudder above the sakura.
Kora provides decals for this aircraft in their 1/48 set mentioned in the previous post, but has the tail marking in yellow.
In 1/72 there is this Hasegawa kit. 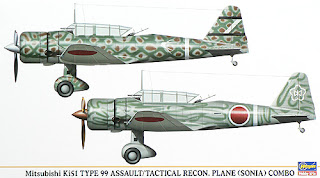