The 381 Kokutai was organized on October 1, 1943, as a fighter-bomber unit. On April 1, 1944, carrier aircraft types and night fighters were added and organized three hikotai, 602 Hikotai with 48 fighter-bombers, c/o Lt Kurosawa Takeo; 902 Hikotai with 24 night fighters, c/o Lt Matsumura Hideo; 311 Hikotai with 48 Zero Model 52 fighters, c/o Lt Kanzaki Kunio.
The details below are from photos featured in various Japanese publications taken in March 1944, in Toyohashi base, Aichi Prefecture, before the unit was dispatched to Borneo.

And another photo from here.

All the Zeros are Model 52s fresh out of the Mitsubishi factories except for the Zero in the photo above "81-113" which was Nakajima built.
Let's see a few interesting details.

All the aircraft have NMF propellers and spinners and have the last two digits of the tail marking repeated on the lower cowling lip.
No numbers are repeated on the wheel covers and the interior of the landing gear and wheel wells are in hairyokushoku; same color as the undersides of the aircraft.

Note the bomb rack under each wing. 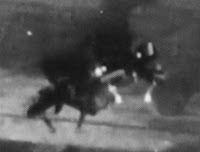 Here's an illustration of the bomb from here, with more details.

In case you're wondering, it's the same bomb Fine Molds includes in their "Babs" kit.
Note the width of the IFF stripe and the cloth wrapped around the barrel of the 20mm wing cannon.

From the close-up below we can confirm that the wing top hinomaru are with a white surround. As are the fuselage hinomaru. 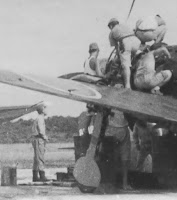 Of interest are the ground crew members and their clothes (check older posts for more details).
AFAIK, noone has released any kit or decals of these aircraft. Leave a comment if you know something.
BTW, the Zero Model 52 displayed in Yushukan, has 381Ku markings. Photo: Arawasi 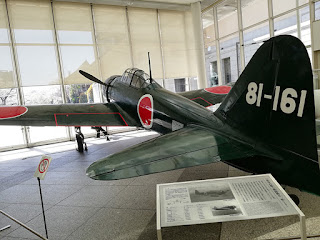 From Toyohashi to Borneo is more than 400km, a rather long distance for a single engine aircraft and the Zeros of the 381Ku had to make stops at Kyushu, Okinawa, Taiwan and the Philippines. Once in Borneo they spent their time training and patroling until about August 1944.
On September 1, 1944, the unit had 40 602 Hikotai Zeros in Balikpapan together with eight 902 Hikotai "Gekko" night fighters. 32 Zeros, nine "Raiden" and two 602 Hikotai "Gekko" were based in Kendari and two 902 Hikotai "Gekko" were in Surabaya.
The publication "Nankai No Umiwashi-tachi" (The Imperial Japanese Navy Air Groups in the Southwest Pacific Theater) by DaiNipponKaiga, features 381Ku photos taken by photographer Abe Tetsuo when he visited Sorong base, West Papua in May 1944. Three Zeros stand out, let's see the details.

The "81-1183" was a Nakajima built A6M2 with cluster bombs under its wings. The hokoku inscription on the fuselage reads "Seram 1". It's highly unlikely the locals actually donated this a/c so the purpose of the ijnscription is unclear. Very unusually, the tail and about half the wing area had been painted in a lighter color and it looks exactly the same with the hairyokushoku of the lower surfaces.
The other photo close-up shows two more A6M2s also with lighter tails and wings.

Unfortunately the photo print is so full of noise that it's next to impossible to discern the tail markings, so we will just have to take the word of the authors; white "81-1146 with a red band under the marking and white "81-1142" with a half white band under the marking. The ends of the cowlings are also a lighter color. This could be either white or hairyokushoku.
Hasegawa has released kit no. 07411 in 1/48 with decal options for "81-1183" and "81-1146".

Rising Decals has released an extra in 1/72 with decals for all three aircraft and resin wing bombs. 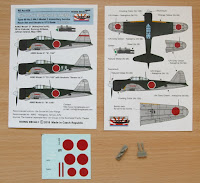 The book "Tatakau Zero-sen" by Watanabe Yoji, published by Bungeishunju features a number of 381Ku photos taken at Degos airfield, Mindanao, in the Philippines in April 1944. Among them there is one of particular interest, here's a close-up.

It's probably a Mitsubishi built A6M2 with the cowling edge in lighter color and two bands on the fuselage behind the hinomaru. Unfortunately the tail marking is not visible but, according to Watanabe, the particular aircraft was flown by c/o  Lt Kanzaki. The A6M2 looks intriguely similar to the Zeros we saw above based in Sorong and therefore I don't think the illustration below I found on the net is too accurate regarding the colors of the tail and the cowling edge. 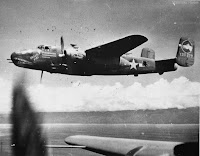 Great info and photos!!
That Zero taxiing next to 81-113 seems to be a Model 21. The wing cannon apertures appear to be covered--note the absence of cannon barrels--and the cowl flaps don't have the indents for the individual stacks as seen on the Model 52.
Hope you have a Happy New Year!!