This elite unit was organized around April 25, 1945, was based in Kanoya, Kagoshima Prefecture, Kyushu, and was assigned to the protection of the air bases of south Kyushu against B-29 raids. It was an exclusive "Raiden" unit gathered from the 302 Kokutai, the 352 Kokutai and the 332 Kokutai. It was nicknamed "Tatsumaki Butai" (Tornado Unit) and commander was LCDR Yamada Kushichiro, the leader of the 302Ku air group.
The first "Raiden" from the 302Ku were to arrive on April 23 but three made emergency landings at Naruo airfield, one was forced to land at Matsuyama base and in the end, eight reached Kanoya. During the same day, 12 "Raiden" from the 332Ku arrived as well. Crews and supplies arrived with one Yokosuka L3Y, two Douglas L2D and three Mitsubishi G6M1-L2.
The next day, ten "Raiden" from the 302Ku landed in Kanoya together with two from the 332Ku.
They were followed on the 25th by one from the 302Ku and three from the 332Ku.
The next day, seven "Raiden" from the 352Ku arrived, but, during landing, one of them suffered serious damage.
All in all, the unit had 19 "Raiden" from the 302Ku, 17 from the 332Ku and six from the 352Ku.
On April 27, "Tatsumaki Butai" was organized as follows:
There were two main groups, "Ko" with all the 302Ku aircraft and "Otsu" with all the rest.
The "Ko" group was split into 1tai with 1st (four "Raiden") and 2nd Shotai (three "Raiden"), 3tai with 3rd Shotai (four "Raiden") and 4th Shotai (four "Raiden"), and the 5tai with the 5th Shotai (four "Raiden").
The "Otsu" group was split into 2tai, 4tai and 6tai with two shotai each. The shotai of the 2tai and the 4tai (from the 332Ku) had four "Raiden" each and the two shotai of the 6tai (from the 352Ku) had three "Raiden" each.
Below are all the aircraft of the "Tasumaki Butai" with their pilots as of April 27, 1945.
302 Kokutai
ヨD-147 - PO1c Murakami Yoshifumi
ヨD-150 - CPO Kaneda Tadashi
ヨD-151 - LTJG Ueno Norio
ヨD-155 - LTJG Sato Noriyasu
ヨD-156 - LdgSea Kurosu Rinji(?)
ヨD-157 - LT Ito Susumu (commander of the 302Ku group)
ヨD-158 - CPO Yamakawa Mitsuyasu
ヨD-167 - this aircraft was not mentioned in the register of that day
ヨD-185 - LdgSea Kuroda Shoji (actually 32-185, see pt.4)
ヨD-1163 - LTJG Tsukada Hiroshi
ヨD-1164 - PO1c Sasazawa Hitoshi
ヨD-1167 - CPO Suzuki Hironobu
ヨD-1173 - CPO Ito Seikichi
ヨD-1180 - LdgSea Tsukada Shigeo
ヨD-1183 - LTJG Katami Seijo
ヨD-1190 - WO Baba Takehiko
ヨD-1193 - CPO Kobayashi Katsuji
ヨD-1197 - LdgSea Oki Takeshi
ヨD-1199 - CPO Kawai Shigetsugu (Shigeji)
ヨD-185 - PO2c Oomine Minoru
The "battle reports" of the unit, mysteriously, mention two ヨD-185 "Raiden", which is highly unusual. On April 27, Kuroda's plane was part of the 1st Shotai and Oomine's part of the 4th Shotai. On April 29, Kuroda took off at 06:15 and the second "185", this time flown by LTJG Ueno, took off two minutes later at 06:17. In all the "battle reports" the planes are clearly mentioned as "185", so there is little possibility of making a mistake and writing "185" instead of, for example, "1185". Obviously, they were two separate aircraft.
Update: see pt.4, here.
In general, the 302Ku had "problematic" tail numbers. There are photos of different types of aircraft with the same register. For example, there is a "Ginga"  ヨD-156 and a Zero ヨD-150. Perhaps when these aircraft were reassigned, destroyed or retired, new aircraft received their registrations. 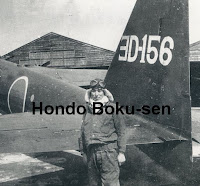 There are photos of 302Ku "Raiden" with the same tail numbers as those of the "Tatsumaki Butai" but taken at a later date or at the end of the war. Perhaps they are the same aircraft but, because of the aforementioned problem, we can't be 100% sure. 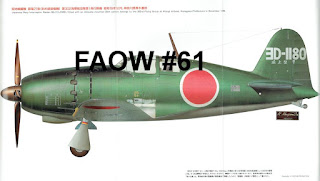 As mentioned in the previous post, the "Raiden" of the 332Ku should have their fuselage hinomaru with a darker surround.
352 Kokutai
352-32 - LdgSea Iwaki Hideo
352-37 - LTJG Aoki Yoshihiro (commander of the 352Ku group)
352-52 - ENS Kaneko Kiyotoshi
352-61 - LTJG Okamoto Toshiaki
352-62 - LTJG Yamamoto Sadao
352-67 - ENS Kikuchi Nobuo
Note that commander Aoki did not bring with him his "352-20" "Raiden". As we previously saw, the lack of photographic material in combination with the "Tatsumaki Butai" "battle reports" led Arii and Tamiya to conclude that the "Raiden" with the two bolts of lightning had the tail number "352-37".

Unfortunately the photograph of "352-20" proves that these depictions were inaccurate. Please, if you care about accuracy, don't apply the old Tamiya decals with the wrong tail number on your kit.
Arii nevertheless included one more "Tatsumaki Butai" "Raiden" in its old kit.

The Aeromaster decals include five "Tatsumaki Butai" "Raiden" in two sets in 1/48. 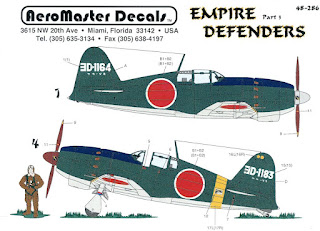 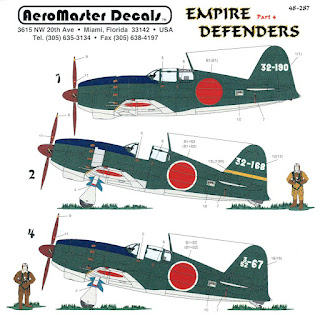 As before, this post will be updated. Stay tuned!
Posted by Arawasi

I didn't know that this conglomerate of Raiden units was formed in April 1945. Various sources attribute Yo-1183 to Lt Teramura Junro, lost on 29 May with Lt(jg) Fukuda Ei. See my article published here:
https://arawasi-wildeagles.blogspot.com/2018/10/hellcat-vs-raiden-by-michael-thurow.html

I'm not sure if the pilot assignments are correct. The plane was certainly flown by various officers.

Hi Michael,
thank you for your input.
The "sentoshoho" of April 27, 1945, mentions that "YoD-1183" made an emergency landing on that day and was destroyed. The pilot LTJG Hoji Seiji(? the question mark means that we are not 100% sure how the kanji of the pilot's first name was read. Seiji is the most probable) suffered light injuries. The unit diary, a different document from the "sentoshoho", repeats the same and includes that Hoji dropped the bomb(s) with the time fuse he carried in the airfield's west area, causing no damage to the runway. An indication he carried "Ta-Dan" or Type 99 Type 3 Mk3 bombs.
The same YoD-1183 is included again in the "sentoshoho" of April 28 but of course it didn't fly that day.

I don't know about your May 29 incident. I can suggest that either they fixed the plane or a new one got the same tail number. As mentioned in the article, the tail numbers of the 302Ku are problematic. A Japanese source mentions that Hoji died on May 29.

>I'm not sure if the pilot assignments are correct.
I think you misunderstood what we're trying to do. The aim of these postings is not to "assign pilots to certain aircraft" as you mentioned in another comment. As clearly stated in the post, the lists include the aircraft and the names of the pilots that flew them that particular day. You will notice that I even mention that Aoki didn't bring his "352-20" to the "Tatsumaki Butai". Of course some aircraft were flown by different pilots. Didn't I mentioned that in the previous post?
And if you have reasons to doubt the accuracy of the unit's "sentoshoho", I'm afraid you'll have to offer substantial proof to support your claim.

In KFI #96, p.138~139, Watanabe Yoji mentions: "The YoD-1183 is seen taking off. The yellow band signifies that it was a commander's aircraft. There is a possibility that LTJG Fukuda fought against P-51s with this aircraft. On the opposite page, the gun camera shot shows a "Raiden" getting shot down by Maj James B. Trapp(?), unit commander of the 15FG/78FS, on April 19. The yellow band of the "Raiden" is difficult to assign to a low-rank officer and therefore it is almost certain that it was Fukuda's aircraft. The yellow band and the overall "balance" of the tail marking makes this aircraft very similar to the YoD-1183".
From the above, it is certain that the "sentoshoho" of that day does not mention any tail markings and pilots assigned to them, otherwise there would have been no doubts. You will notice that Watanabe makes a suggestion that it's the same aircraft flown by Fukuda but he is not 100% sure.
That's for your records, and in any case I'm not interested to delve in the history of the 302Ku. This posting is about the "Tatsumaki Butai". Period.

Hi George
As you write about the same code designations for the Kokutai 302nd, it still has the designation YoD-153 Ginga and Zero. So apparently the practice was there.
That's just an aside.
Best regards
Radek

Incredible piece of work. Thank you so much.