In this second part, I will work on the cockpits of the other "Akatonbo" kits and try to make them more accurate.
As you perhaps know, apart from the prototypes, there were two "Spruce" models that went into production; Model Ko & Model Otsu (the latter was never called "kai" as Francillon mentions in his book entry). Their main external difference was in the design of the landing gear.
But there were also differences in the cockpits.
The illustration on p.20 in FAOW#73, shows what the cockpit of the Ki-9 Model Ko looked like. 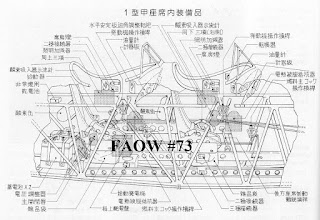 I'm confident it was based on the type's maintenance manual, and you can see various accessories, like bags that were not included in the Otsu.
We have in the Arawasi collection an original copy of the maintenance manual of the Model Otsu. 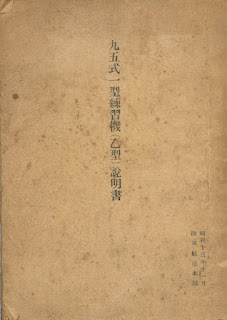 The Otsu manual does not include any overall cockpit illustrations like the one in the Ko manual and therefore we don't know for sure what exactly the Otsu cockpit looked like. But all Japanese sources agree that the cockpit of Model Otsu was much simpler than that of Ko, with various unnecessary accessories and features removed.
These manuals included all the features and accessories of the particular aircraft type and model accompanied by detailed illustrations to help the maintenance crews to service the aircraft.
The manual for the Model Otsu does not include any electric system. There are no batteries or switchboards, as seen in the cockpit illustration of Model Ko and included in the Nichimo kit.
There are no oxygen bottles behind the seats. These would be useful during higher altitude training, but this did not happen with the "Akatonbo"; high altitude training was undertaken with the Tachikawa Ki-55 "Ida".
The Otsu maintenance manual shows what the seats looked like. 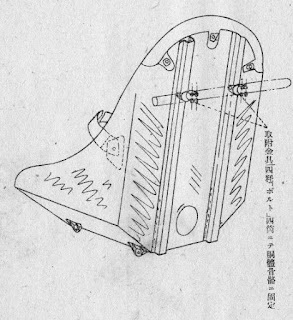 Below is a photo of an original "Akatonbo" Model Otsu seat, courtesy of Kojima-san. 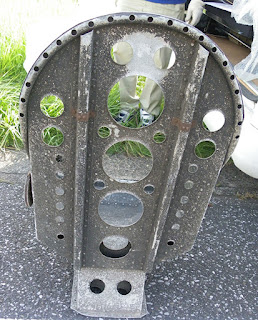 The differences between the actual seat and those of the Nichimo kit are apparent.
The kit includes a pair of interesting control sticks. Again these were for the Model Ko, not the Otsu.
Below is the manual illustration for the control sticks of the Otsu.

And a vintage photo that confirms the illustration. 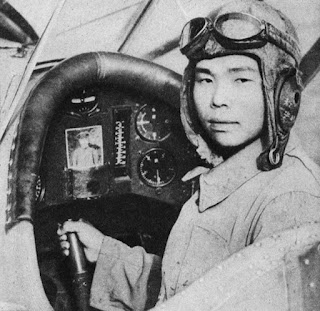 Below are the Nichimo kit instructions in English.

In my opinion, the cockpit of the Model Otsu was very similar to the cockpit of the Tachikawa Ki-17, as can be seen on p.79 of FAOW#73. Basically nothing on the starboard side of the cockpit and only controls on the port side.
I decided to remove all the switchboards and stuff on the starboard side of two "Spruce" models and keep the switchboard, only on one of my "Spruce" models. The logic behind it is that the switchboard was used to power the electrically heated pilot uniform and perhaps some "Spruce" had this feature for the schools that flew the type in cold climates, like in Manchuria. Unlikely, but what the hell.
I also modified the pilot seats as best as I could. First I tried to hollow out the bottom of the seat but in the end, opted to remove it completely and add a styrene piece. I also opened some holes in the seat sides, removed everything from the back of the seats and added two styrene rods.
Some seats turned out quite nice, some less so. Next year, when I buy my own 3D printer I'll try to create even more accurate and crisp seats. Yes, I have more "Akatonbo" models in my collection. As I said, I simply love this plane.
I also worked on new control sticks. I thought a lot about how to do it and in the end, I opted for the easiest option. A single 1mm styrene rod, lightly cut and bend the top and then file the top end until it looks like a handle. I think they turned out great. The bottom of the stick is supposed to end in a hole, as seen in the Ki-17 interior (FAOW #53, p.79). Highly unlikely that there was only a hole. If something fell in, it would be a bitch to remove and could mess up the controls, something not desirable at all. Taking into account other IJAAF and IJNAF a/c, I think the bottom of the stick was wrapped in a leather pouch. No photos to confirm this, though, so I decided not to waste more time on this and just glue the stick to the cockpit floor. Not the best looking, but hopefully will be able to fix this detail too with my 3D printer.
I wanted to test your suggestions for the interior blue (hairanshoku) and this morning, after some acting up from the airbrushes, I finished one side of the cockpit. 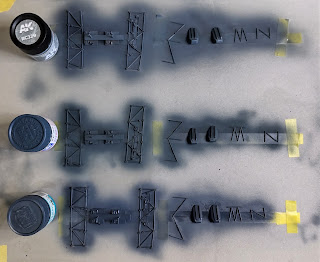 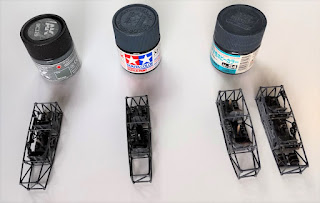 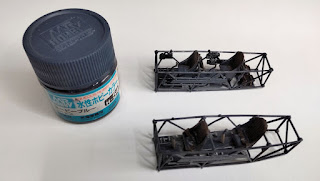 I think I like the tone of the AK paint the best. MrHobby's Navy Blue is just a little bit too dark and Tamiya's Field Blue is somewhere in between. All of them are not bad at all though.
I used Tamiya's panel accent and weathering master for weathering and Gundam marker silver. Note the seat backrest pillow was filled with kapok and wrapped in leather. The seat arm sides were also covered with leather.
The seatbelts are from Fine Molds and I absolutely hate them. They bend completely straight, you can never know where exactly they will fall when bent and, in the end, they look quite unnatural. I have yet to find a satisfying set of seatbelts. One of the things to work on when I get the 3D printer.
11/12 Update:
Okay. Finished the interior of all four "Akatonbo" kits. This time I used much thinner styrene, 0.5X0.75, for the stringers and the result is a lot better. I painted the fabric with MrHobby H-85 "Sail Color" and the stringers with Tamiya XF-78 "Wooden Deck Tan". The metal part of the interior is painted, from top to bottom, in MrHobby H-54 Navy Blue, Tamiya XF-50 Field Blue and AK Interactive RC329 hairanshoku (Grey Indigo). I still prefer RC329 but the paint gave me some grief with the MrColor Thinner 400.
Question: what's the difference between RC329 and AK11900? Both are named "hairanshoku".
I worked more carefully and properly on the interiors of the other three kits. I drilled teeny tinny holes (very easy to cover with Mr. Surfacer) where the stringers are visible on the exterior and on the corners of the metal parts. These guided me to place the stringers and figure out the exact outline of the metal parts in the interior. Otherwise, it's next to impossible to see through the plastic. I'm much happier with the end result now and in comparison, the top out-of-box effort I built first, looks absolutely horrible. Well, what can you do? 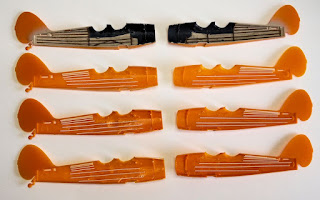 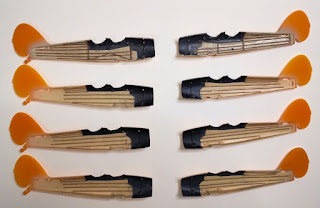 Also, "Sally" is here (yeah baby!!!!) and I'm starting working on her this Monday. I won't put "Spruce" aside so both projects will get updated.
Stay tuned!
Posted by Arawasi

Great information. I'll redesign the crew seats and control rod more to a realistic look. And I'll try to incorporate them into the setup. Thanks, George.