Mitsubishi G4M2Ab (or Model 24 Ko) of the 763 Kokutai.
This NARA photo clearly shows the way the fuselage mounted 20mm cannon was installed and locked.

The original caption wrote:
"Sgt. H. W. Willis of Beckeley, West Virginia, a member of the Air Technical Intelligence Division of the Air Force, examines the 20 mm machine guns of a Japanese "Betty" which was captured intact on Clark Field, Luzon, Philippine Islands. The plane was very heavily armoured and had terrific hitting power."

Note the cannon magazine he's holding and the antenna of the type H6 radar. 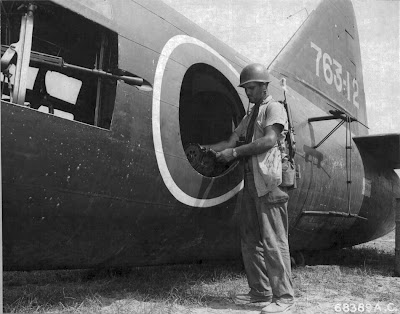 "The plane was heavily armored"? Either the person who wrote the caption was mistaken, or most of the writers today are wrong. They all say that the G4M lacked armor almost entirely. I believe they added more in the later M2 and other late variants, but I didn't think it was what a US technical evaluation unit would call "heavily armored". Unless they just meant in relation to the G4M1 they were used to seeing. Or this is an even later, special model that they loaded with armor hoping to reduce losses.

I think the caption is meant to say that it had plenty of defensive machine guns and cannons. "heavily armed" would have been better.