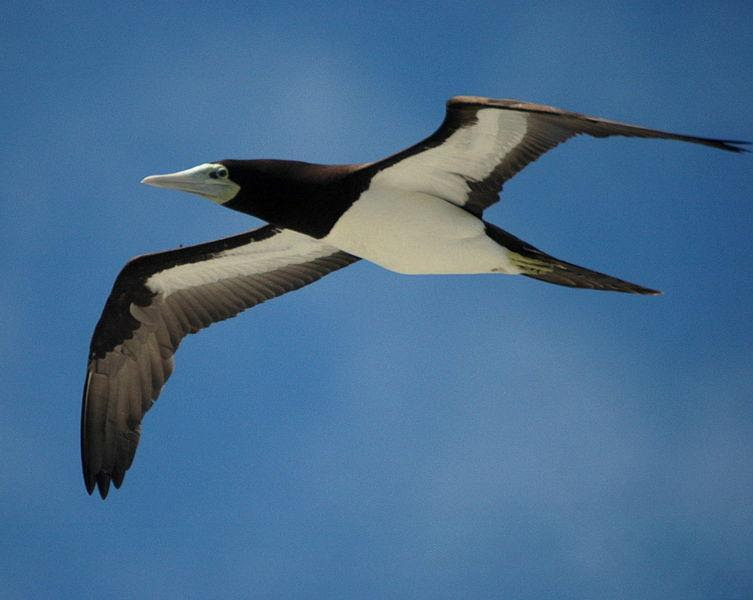 Kayaba Shiro, the boss of Kayaba Seisakujo, liked fishing very much. He particularly admired the swimming of the squid; how they escaped when in danger by ejecting water. And the way a brown booby* looked when they dove to catsh fish; taking a triangular tailless shape. Inspired by these two, in the Autumn of 1935 he came up with an idea for a tailless jet aircraft.
After discussing the idea with Kayaba’s chief engineer Usubuchi Kiyodata, they put together a basic plan for an aircraft flying in the stratosphere, as the title indicated. Copies of this plan were eventually sent to high ranking officers of the IJAAF, among them Ishiwara Kanji who was really impressed by the fact that there were visionaries in Japan working on such advanced projects. Two months later, Ishiwara accompanied by other IJAAF officers visited Kayaba Seishakujo where they were introduced to the possible fuselage designs and engine configurations of which there were two, a “heat jet engine” and “heat boiler steam turbine”. At the same time Kayaba also admitted that the company was too small for such a project so suggested to be undertaken by the Army. Ishiwara on the other hand insisted that it should be assigned to a civilian company and requested basic drawings to be delivered as soon as possible. After their eventual submission the Army allocated the huge amount for the time of 200,000Yen for a five year period for research on the project.
Kayaba still felt that it was beyond their capabilities so requested the help of the Aviation Department of the Tokyo University who were eager to offer their assistance on such an interesting project. Ogawa Taichiro, Kimura Hidemasha and Okamoto Tetsuji were responsible for the fuselage design while Nakanishi Fujio worked on the engine.
On September 7, 1936, pioneer aviator and inventor Hino Kumazo** visited Kayaba looking for employment on interesting projects. Kayaba explained what they were working on and asked Hino to create as many as possible paper models with ideas of his. Hino came up with 20-30 versions which were all thoroughly tested. In the end of 1936 he brought his paper models to Tokyo University for an exhibition. The exceptional flying qualities of the models led the university researcher team to start working on actual designs based on them. Eventually a glider design was completed two months later and an order for a first prototype was given to Ito Hikoki Seisakujo. The glider was named HK Model 1, “H” standing for Hino and “K” for Kumazo. An alternative name was Kayaba Model 1 and the first glider prototype was completed in the end of February 1938.

From January 1939 tests started slowly with very short flights from the slopes of Kashima, Ibaraki Prefecture with test pilot Shima Yasuhiro in the controls. In the beginning of Summer, tests moved to Kashiwa airfield in Chiba Prefecture where the glider was towed by a vehicle and these tests were completed in August 29 after 53 satisfactory test flights.
From September 6 tests started in Tsudanuma, also in Chiba, with the glider this time towed by a Navy Mitsubishi 1MF Carrier Fighter (a rather unusual choice for a tow aircraft). Although initially the altitude was only ten meters, Shima commented that the glider behaved excellently and aircraft towing was problem-free. Gradually the altitude was increased with the glider showing excellent stability and response to the controls. On October 22 there were numerous test flights at an altitude of 1,000 meters with the glider reaching speeds of 140km/h and the pilot performing smoothly beautiful loops and manoeuvres. Spectators including Kayaba and Tokyo University members were thrilled and immensely satisfied with the performance of the glider. A happy day indeed.

Tests continued for another six month period until March 7, 1940, completing 116 flights. Before delivering the glider to the IJAAF, from April 5 to 16, pilot Shima flew 13 times showing Army pilots how to fly the glider and to familiarise them with the unusual characteristics. On April 16 it was time for an Army pilot to test fly the glider for the first time. After a successful take-off and release from the towing aircraft, the glider flew nicely but the unnamed Army pilot experienced difficulties during landing. In the end the pilot nose dived seriously damaging the glider.
Kayaba Model 1 was followed by two more models of different design.

Main source for the above is the excellent book “Showa no Nippon Koku Igaishi” (Surprising History of Japanese Aviation During the Showa Era), published in 1993 by Green Arrow. The author is Suzuki Goro, a member of the Mie Kokutai.

*The Japanese name for the brown booby is "Katsuodori".
**Hino Kumazo flew together with Tokugawa Yoshitoshi who made the very first powered aircraft flight on December 19, 1910.
Posted by Arawasi