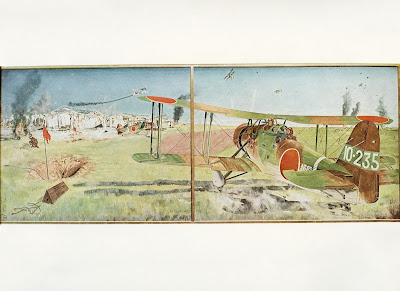 Fujita Léonard Tsuguharu (November 27, 1886 – January 29, 1968) was one of the most important although little appreciated Japanese artists of the 20th century.
"He experimented with watercolor, inventing a unique blend of crushed oyster shell and color to produce the milky skin tones for which he is still famous today. Stylistically, he amalgamated Japanese calligraphic and ukiyo-e techniques with European Modernism, flattening or eliminating perspective while maintaining a silky sinuous line."
In 1933 returned to Japan after travelling in Europe and Latin America and created a number of war paintings. In 1938 he was sent to China as an official War Painter and stayed until 1939.
The diptych above done during his stay in China portrays an event best described in Håkan Gustavsson’s site HERE.
"On 18 July the 15th Kokutai dispatched 14 carrier bombers and five carrier attack aircraft under Lieutenant Commander Matsumoto, escorted by six A5Ms led by Lieutenant Mochifumi Nango (Class 55), to participate in the attacks on Nanchang. The carrier fighter squadron, however, was unable to rendezvous with the carrier bomber squadron at the appointed place. They clashed with a reported eleven Chinese fighters in an air battle over Lake Piyang and after finishing off a damaged enemy fighter Nango turned to search for a new opponent when another burning Chinese fighter crashed into him. Both machines tumbled into a lake. The Japanese fighters returned to claim 9 victories and two probables with only one loss. Two of the victories were claimed by PO3c Hatsu-o Hidaka. PO3c Ichiro Higashiyama, who flew as number two wingman to Nango and witnessed his demise, claimed two enemy aircraft (totally 6 victories – 6 in China).
Five I-15bis from the 8th PS at Xiaogang (Hubei Province) had been sent to Nanchang for early reaction to Japanese attacks. In the air battle Lieutenant Huang Qiu was first shot down, and then the Japanese surrounded and destroyed the entire group of I-15bis. According to English sources it was the Soviet volunteer V. Dadonov, which crashed into Nango, escaping by parachute.
At the same time Lieutenant (junior grade) Ogawa and Satoru Ono (who recently had been posted from the Kaga and was flying as number two wingman to Matsumoto) of the carrier bomber unit pulled off the stunt of landing on the Nanchang airfield, setting enemy aircraft on the ground afire, and then taking off! Totally 19 Chinese aircraft were claimed destroyed on the ground. Ono also claimed two additional enemy aircraft in the air."
The bombers were Type 96 Carrier Bomber or Aichi D1A2 and the 15th Kokutai at that time had indeed the number "10" as the unit tail marking. Note the vivid colours for the 2-tone top camouflage.
Posted by Arawasi