Model Commentary #4a - Choosing your next J. a/c model

Many years ago Japanese airplanes became my passion. One of the main reasons was that nobody in my home country, Greece, knew anything about them. British, German, Italian aircraft yes but not Japanese.
For many years we all Japanese plane modelers waited for a decent A6M2-K kit to finally come out. You can imagine my utter disappointment when I read a posting saying: “I got this new Hase A6M2-K kit but I’m thinking of turning it into a Pearl Harbor A6M2. Any suggestions?”
How about another posting I recently read: “I got this A6M2 kit and I’m going to make it into a seaplane with two floats.” Reply: “Are you sure?”, “Yes, yes I saw on the net that there was a twin-float version of the Zero”.
There are some well-known researchers out there who share the same passion and have spent a great amount of their time (and money) researching in depth the colours of J. planes. Imagine how they feel when they read this kind of exchange.
A: “I got a Zero kit and I want to build it as accurate as possible. Any suggestions about colours and paints?”
B: “Colours were such and such and the closest is a mix of this and that paints.”
A: “Hmmm I don’t want to do any mixes. How about the closest straight-from-the-bottle paint?”
B: “Ok. Mr Color XXX”
A: “You know, I don’t really want to buy any paints just for J. planes. What are the closest Luft paints to these colours. Humbrol if possible.”
It’s like sending an email to NASA with a request:
“Hi, I’m not particularly interested in astronomy but I have this school project about black holes I have to deliver. I found some photos on the net but would it possible to send me two pages with as much as possible information about black holes?”
So, what’s going on? Has the net made modelers lazy or is it that they don’t care about accuracy any more but are only interested in building fancy models, as some loudly declare? Personally I think it’s the luck of information. There are hundreds of extremely interesting and useful publications about J. planes, but they are all in Japanese. The past 15 years or so Arawasi has tried to help and create interest through our magazine and publications we continue to release. But unquestionably the net is a more direct medium to those modelers who just want a quick fix. We believe this blog is also creating interest and brings more people with the same passion together, while at the same time offers inspiration and useful advice.
The main problem starts with choosing a J. plane kit and this posting hopefully will help a bit.
Immediately after the war finally ended the Japanese military and the aviation companies thoroughly destroyed their archives burning the vast majority of their blueprints and detailed aircraft drawings. What has survived is mostly maintenance manuals. The occupying forces initially wanted to preserve a number of Japanese a/c types and bring to the US and UK the most interesting of them for evaluation. In the end only a small fraction survived over the years. So, contrary to other countries’ a/c where very detailed factory blueprints and surviving a/c are still available for anyone to examine, this is not the case with most Japanese types. And this means there are still great unknowns about for example the interiors of many of them. It also means that with the growing quality of models in recent years main companies like Hasegawa or Tamiya are reluctant to release a kit of a J. X-plane for example, when nothing is known about the cockpit of the plane. Some Eastern Europe model companies don’t mind that and prefer to release a kit with a very limited cockpit than not at all and then the modelers are left to search in vain for material if they want to add detail to their model. In the end they give up and build a Zero or a Me109 instead.
On top of that we all know how obsessive on certain subjects modelers from certain countries are. Modelers from the US mainly build Pearl Harbor, Midway and the occasional IJNAF Kamikaze plane. UK modelers focus on CBI, Australians on Papua/New Guinea…in general wherever the military forces of their countries fought at during the Pacific War. With such limited interest, understandable as it may be, it is rather unfair to claim that “Japanese a/c are boring. Green top, gray bottom. That’s all”.
And then occasionally there is the rather obnoxious modeler trying to press the subject “I want to build a PH Zero. Were there any that weren’t “gray”?
Again the problem starts with choosing a Japanese plane kit. I strongly believe that before purchasing a kit, the average modeler (not the more knowledgeable dedicated J. aviation fan) should first research and make up their mind about their subject and then go ahead and look for the best kit available. Not the other way around. You want to build a Zero? Fine. Do your research first, find which one you want to build and then go ahead and buy a good kit. Yes, occasionally you may find a cheap kit on special offer but consider this a quick, probably out-of-the-box built. Or a perhaps more interesting suggestion might be to get an after-market decal set and then build models based on the options they offer.
So let’s start this quick guide with the most popular subject, the Japanese Fighters of the Pacific War, excluding prototypes and X-planes. As with most IJNAF types flown during the Pacific War most of these planes sported typical green over gray paint job with few variations, consisting mostly of personal markings.
The IJNAF operated three single-engine land-based types. The “Zero”, the “Raiden” and the “Shiden/Shiden-kai”.

The most famous and the best documented of all Japanese a/c. Plenty of books (see 1, 2, 3, 4), a few surviving and restored a/c, plethora of on-line photos and material.
Most modeled subjects: Pearl Harbor and Nishizawa’s A6M3 (photo above).
More than enough high quality kits in every scale, decal options, after-market stuff around.
Check how beautiful this “boring” green over gray Zero by Master Modeler Nakata Hiroyuki is.
Mitsubishi J2M “Raiden” (Jack) 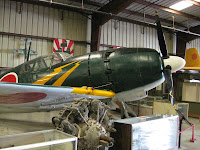 Only a handful of books are available (HERE) but they do cover the subject sufficiently enough for any modeler to create a really good model like those featured on this blog. Some really good kits around like the one from Zoukei Mura. We started covering the “Raiden” last year and we will continue with a lot more in 2015. Stay tuned!
As a modeling subject it offers limited paint options, prototype overall orange or gray and green over gray. Typical IJNAF markings with letters/numbers. Therefore the most modeled “Raiden” is the one flown by Lt.JG Aoki Yoshihiro
Kawanishi N1K “Shiden/Shiden-kai” (George)

The bibliography is even more sparse than that of the “Raiden” but again it is sufficient to build a decent model. There are some excellent immediately available models by Aoshima in 1/72 by Hasegawa and Tamiya in 1/48 and Hasegawa and Nichimo in 1/32. Although arguably the best single engine Navy fighter, it is the least modeled fighter of the three probably because the paint options are mostly green over gray.
Hope this helped a little. And you know, if you leave a comment this posting can become even better!
Next up: seaplane and night fighters
All photos from Wikipedia
Posted by Arawasi

Maybe it helps but surely it will help in the future.
The fact is that a passion for japanese related subjects is a long process in the mind and heart of a modeller. As you said, for german, american and english planes there is plenty of information. Plus, luftwaffe planes have very different schemes. USAF WWII planes are the most colorfull.
I think that this passion is recreating the life of a man:
When you are young, you just find out that there are girls. You begin to understand that it's a different thing than cars, that they can answer, be nice and so on. You will be atracted by the closest to the prototype kind of girl.
As you go further, your demands will make you to bacame more and more selectiv. Big (or many) turrets and firepower will no longer make you happy. This is the phase when you are ashamed that earlier you have swore that you will build and paint only luftwaffe planes until you will finish all variants and prototypes or the world will finish and interrupt your process of "creation".
Inclination for Japanese subjects will come to you naturally, with age. They require patience and a studious spirit. You are nolonger happy with a pair of nice legs that turn heads on the road. You want something to spend your time, to taste it in time. Then the documentation of certain types become itself a very important part of the hobby. You have 300 models under your belt and a huge stash in the "secret" room. Is very clear that you will not be abble to finish them ever. So why rush and ruin them instead.
If you get pass to this stage, you will tackle French or Romanian subjects and even worse WWI period.
Well that may be called perversion.

On the other hand, when I started this hobby, internet was a beautiful story in my country. I used to go to an internet caffe with 2-3 floppy disks and download 5 pictures. The rest came from books. I mean with pages that you have to turn to read the next one. And those was rare too. So I cultivate some study habits. There was no forums in 1997 so, to find out what green was that on the interior of an Italian bomber you have to do some research by yourself and most often mistaken a few times and swallow your tears about that state of the art model you have just ruined.

Great article and I hope you post more. Even though I am American I was always attracted to right Japanese aircraft right from the beginning. Especially the Army types with their wild camouflage designs. I guess I was always a little different than others. In the US the most popular WWII fighter is the Mustang. They are done all the time, but my favorite is the P-47 Thunderbolt. Love that plane! My favorite Japanese subject is the Ki-84. I have built 2 followed by the Ki-43. I am now about to work on a navy B7A. I hope to someday build a Ki-45 Nick and Ki-46 Dinah. As for paints, I sometimes substitute colors that are close but for special builds I enter into competition I do everything I can to get the colors right. If you are building for your own pleasure and have a limited budget I think it is ok as long as you are honest that the colors are not 100% accurate. In time I hope to have all the correct colors.