The next part in this series is about the Night Fighters of the IJNAF, a fairly neglected modeling subject. The big oblique guns are admittedly much more interesting than the paint schemes but there are many types of IJNAF types that were modified for night fighters to allow for subject variety. All of them without exception were painted green/top, gray or silver bottom so don't go out looking for colorful scheme variations. These planes flew at night and wanted to be as undetected as possible.
First up is the Nakajima J1N "Gekko" the only dedicated night fighter type, even though it started as a reconnaissance.
Although the bibliography is small, the only surviving and restored "Gekko" in the Steven F. Udvar-Hazy Center provides excellent reference for very accurate models.
In the 1/72nd the "Gekko" series by Fujimi remains the only still available. I started mine a few years ago and encountered major fitting issues with the fuselage top. Actually I haven't seen many Fujimi models so if you've built one share your impressions.

In 1/48 the Tamiya kit is the best around and some really impressive models can be built, like the one below from HERE.

Typical inaccuracy issues with "Gekko" models is the excessive weathering when in reality the ground crew took extra care to keep the planes properly painted and avoid natural metal areas that could shine in the night and give away the plane. Unless the model is depicting a derelict aircraft found after the end of the war. In that case anything goes regarding weathering.
Next up is the Yokosuka D4Y2-S, the night fighter version of the "Suisei" (Judy). Again the bibliography is very limited but the "Judy" in Yushukan provides very accurate reference.
﻿

Fujimi has released only one kit in 1/72. Old but nice with a bit shallow panel lines.

In 1/48 Fine Molds has the best "Suisei" around. Check this brilliant model by Dan Salamone from HERE.

Only limited numbers of the next two famous fighters were modified with oblique cannons; the Mitsubishi A6M "Zero" and the Mitsubishi J2M "Raiden". The bibliography for these two types is extensive but photos of the night fighter versions are very very few and therefore there are not many options regarding markings and modeling subjects.
AFAIK Hasegawa is releasing the only Zero Night Fighter kits in 1/48.

Or you'll have to scratch-build one in 1/72 like this very nice model from HERE. 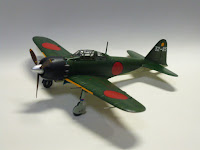 As for the "Raiden", Hasegawa and Tamiya give decals for the  "YoD-1183" with the oblique cannon next to the cockpit but the modification needs to be scratch built. I Googled it in English and Japanese but couldn't find any models. I guess I'll have to finally finish mine...
The night fighter version of the Yokosuka P1Y "Ginga" AKA "Kyoko" was less succseful and not so well-known.
Hasegawa has released three different kits in 1/72. All excellent and highly recommended as modelling subjects.

Check this model from HERE. 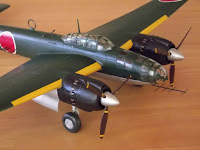 AFAIK no major company has released a "Ginga" kit in 1/48, much less a night fighter version.

And last but not least the coolest night fighter with the biggest cannon; the Nakajima C6N1 "Saiun" Night Fighter.
Fujimi and Sword have released kits in 1/72.

Check this brilliant model from HERE.

In conclusion, IJNAF Night Fighters is an interesting subject but often neglected due perhaps to the few paint scheme options. A dear subject of mine, wish there were more NF models in shows...
Posted by Arawasi

Hi George!
On the subject of the Suisei night fighter, most of these seem to have been converted from the inline-engined D4Y2, but I believe that at least one was also converted from the radial-engined D4Y3. There is a photo of such an aircraft on p.31 of FAOW #69, but this does not unfortunately show the tail code of the aircraft. There is a kit build of a D4Y3-S in Model Art Magazine #666 which has the tail code YoD-252, but I don't know where the information for this came from. One of my planned projects in 1/48 scale is to build a D4Y3-S by cross-kitting Fine Molds' D4Y2-S and D4Y3 kits.

Thank you for your comment Derek. The photo on FAOW#69's p.31 is not conclusive and the caption says so. It looks like it could be the 20mm cannon barrel or it could be something else. According to the caption, veterans of the 3rd Sqn of the 302Ku unit do not remember any D4Y3-S. The same photo is featured on p.189 of the "Air War Over Japan" by Watanabe Yoji and nothing is mentioned about D4Y3-S. So yes, it is very probable that very few D4Y3 were converted to night fighters but AFAIK no photo has yet surfaced to show conclusively a D4Y3 with an oblique cannon and a clearly visible tail marking.
HTH

Thanks for the kind words on the Judy nightfigher I built George. :-) Back in 1998 I also built the Raiden YoD-1183 using the then new 1/48 Hasegawa kit, had a brief article on Hyperscale with a few images.

If I had to do this one over, would be less heavily weathered, a darker brown for the prop blades and also probably a dark green spinner too.

Thanks for making a post about the nightfighters, one of my favorite J-subjects.

Many thanks for your comments, George! It is most useful to have input from someone who can understand the photo captions in Japanese publications! I will probably still proceed with my D4Y3-S project, even though it may end up as a What If...?