Modelled to a picture of these N1K1’s found at Sourabaya in 1945 and sources say it belonged to the 10th Area Fleet/13 Air Fleet - former 936 Kokutai and an ex 934 Kokutai floatplane after that unit was disbanded.
It was found with two other N1K1’s painted in AURI-colours  and only this one had a unit code. On the two other ones it was painted-over. All the three N1K1’s were probably pre-production machines with the  longer engine exhaust ( like the prototype) different from later productions machines.

Gun-camera shots as published in a Reconnaisance book-1945 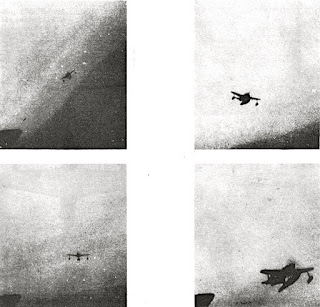 The N1K1 Kyofu with the unit code A1-105 was transported to the Netherlands on the light carrier QH-1 (Karel Doorman-1) together with an Aichi E13A1- spring 1947.
Soon after arrival in the Netherlands the Kyofu was transported to Delft university Aero Technical branch  and scrapped a few month later.
The E13A1 sank in the North Sea after being used for target shooting. I still have to find out the unit code of that plane.


Sorry George-my fault! It's the Hasegawa 1/72 one, I do have a Miyazawa 1/72 resin one too but it needs to be finished. Resin is a tricky stuff.


David,
Sent two pic's to Arawasi, the N1K1 as well as the E13A1 were repainted with Hinomaru's - may be for political reason related to the Dutch "Political Actions" in Indonesia

Really nice! Weathering is good, not too much, but shows hard use. 4.8

Nice to see a model from an unusual historical context with foreign markings. Well done in 1/72, I guess.
I'm a bit unhappy that more often now undersides get camouflaged in this mustard grey, which is quite remote from (early and late) J3. Which colour brand is this?
Nevertheless, great model, Jacob! And realistic weathering. 4.7


Michael,
Thanks for your comment!
My source for this color was the profile of the N1K1 in Model Art 510.
It's a kind of guess but the N1K1's at Sourabaya came from Balikpapans'
22nd Special Base Unit and/or the other units I mentioned. I liked that color
and mixed it myself.

Very interesting to see and read the history of this particular plane. Great build. 4.8

Extremely interesting subject and the model looks fantastic. 4.8 because you didn't send enough photos of the model.