As we saw in the previous part, the second "Rufe" prototype was delivered on February 9, 1942 and five more pre-production aircraft were finished by the end of March. These were followed by the first production aircraft and all were delivered to Yokosuka Kokutai to train the first seaplane fighter pilots.
Yokosuka Ku has a long history as was the very first Navy kokutai organized as early as April 1916 responsible with pilot training and aviation research as well as development and improvement of aircraft. With the fast development of ground based aircraft during WWI, an airfield was built in Opama in 1926. The Yokaren programme started in Yokosuka in 1930 and two years later the Aviation Arsenal was established near the Yokosuka Ku base.
From the beginning seaplanes and pilot training played an important role in the unit with Yokosuka K5Y2 "Willow" as trainers followed by Nakajima E8N "Dave" and Mitsubishi F1M "Pete" in the reconnaissance role. Pilot training also included some aerial fighting so when the first "Rufe" arrived in Yokosuka, reconnaissance pilots were chosen to be trained with them. Original "Rufe" test pilot, Captain Nishihata Kiichiro, became the main trainer and was called "sodate oya" (grow up parent) or "umi oya" (sea parent or, more loosely translated, sea daddy). The tail marking of the Yokosuka Kokutai was the katakana " ヨ " (YO).
There are few Yokosuka Ku "Rufe" photos.
Here's one from here.

The tail numbers of two "Rufe" are visible: YO-180 in the foreground and YO-176 on the left side of the photo.
Another photo, from here, shows the same YO-180 with YO-173 in the background.

Below is another photo from a vintage publication.
The tail marking is not visible but note the "80" on the front tip of the main float; a partial repetition of the tail number. That would mean that it's another shot of YO-180. It is very possible that other seaplanes had their partial tail number painted on the main float.

The ground crew members wear the typical white one-piece uniform of the units stationed in the mainland, the blue cap of the IJN and black shoes.
Of interest in all these photos is the metal dolly (or launching trolley) with the wooden vertical beams. Note the small stool in front of the dolly for better support.
Our good friend Devlin Chouinard has created artwork for all three of them. 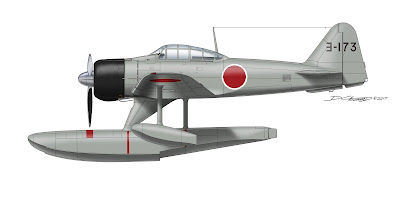 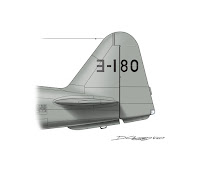 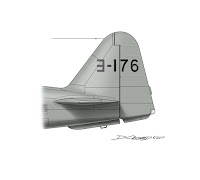 Overall color is hairyokushoku and the red propeller warning band and the two red narrow lines for the dolly are all standard. Silver propeller and spinner with two red lines on the blade tips. The tail marking of YO-176 has been depicted as red by artist Nohara Shigeru in Model Art #510, 1998, but artist Ibukuro Toyohiko in "Zero-sen perfect guide" Gakken 2003, shows it in black. I tend to agree that the tail markings of Yokosuka Ku gray "Rufe" are all probably black.
According to Minakami Senji (?) in Maru Mechanic #3 the "Rufe" were painted in overall "bright gray white" until Autumn 1942 but from that time onward they were with "dark green" top camouflage. There is one photo of a green Yokosuka Ku "Rufe" found in "Koku Janaru Besatsu - Taiheiyo Koku Sen", 1977, with tail number YO-181. 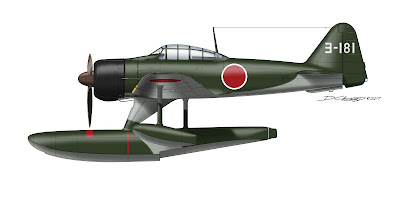 Very good start to the "Rufe" postings. Keep it up.
A special thank you for the superb profiles.