More of the same a/c as seen in the two photos above. Some have their canopies covered.
17. Kawasaki Ki-45 "Toryu"
18. Kawasaki Ki-48 "Lily"
19. Kawanishi N1K2-J "Shiden-kai"
20. Nakajima C6N "Saiun"
21. Nakajima C6N "Saiun"
22. Nakajima J1N1 "Gekko"
23. Mitsubishi Ki-46-III "Dinah"
You mentioned that a/c #20 & #21 are Nakajima C6N "Saiun", not B6N. Nevertheless note that the air intake under the fuselage is on the starboard side, not on the port as it should be. Could it be that this photo is actually in reverse? Makes more sense if the photographer was on the island of the aircraft carrier. 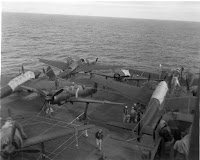 Yes indeed George, we are getting there step by step.

So interesting pics. How many of these beauties have survived up to date?

Yes, the last picture is reversed. The Toryu's hood should open to the starboard side as seen on your mirror copy.

Number 9 from the main photo looks more like ZERO to me.