This is the first installment in a new series featuring primary source material we recently located in the National Diet Library.
Since our current contest is about "Japanese Night Fighters", in this posting, we present a 14-page document regarding the installation of upward and downward cannons on the Navy Type 2 Reconnaissance Aircraft or Nakajima J1N1-C.

First, here's what Wiki has to say:
"In early 1943, Commander Yasuna Kozono of the 251st Kōkūtai in Rabaul came up with the idea of installing 20 mm cannons, firing upwards at a 30-degree angle in the fuselage. Against orders of central command, which was skeptical of his idea, he tested his idea on a J1N1-C as a night fighter. The field-modified J1N1-C KAI shot down two B-17s of 43rd Bomb Group attacking air bases around Rabaul on 21 May 1943."

I. Inclined Fixed Machine Gun Installation
1. As proposed by Commander KOZONO, all of the initial armament of the Type 2 Land Recce Plane was removed from the fuselage and it was equipped with 2 upward inclined and 2 downward inclined 20 mm Mark 2 fixed MG's (100 round magazines) as described below: 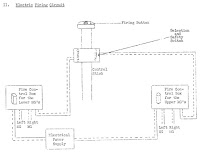 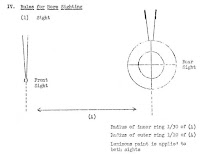 (2) The machine gun installation is virtually fixed; and slight adjustments can be made in the rear mounting sufficient to correct errors in the installation.
(3) Method of harmonization:
The machine gun and the sight are completely harmonized along parallel lines by the ABUNE (TN: phonetic) water level (TN: sight). The methods of correcting the sight, in accordance with the particular aerial combat conditions, and the harmonizing and correcting of sights so as to orient the line of sight to the center of the shell's impact in accordance with the results of actual aerial firing in the anticipated aerial combat are still in process of investigation.

V. Firing Tactics and Battle Lessons
(1) The relation between the speeds of the two aircraft and the point of impact of the MG shell:
(a) The rate of fire of the 20 mm Mark 2 machine gun is 480 rounds per minute (8 rounds per second) and so if the speed of the plane is 250 knots, the shells will hit as follows:
(b) Stationary land target - 1 shell every 16 meters.
(c) Against a target on the same course at the same speed - all shells will hit at the same point.
(d) If your speed is 250 knots and that of the enemy plane is 230 knots on the tame course, your hits will be 1.25 meters apart on the target.
(e) If the planes are both flying at 250 knots in opposite directions, your hits will be at intervals of 36 meters.
(f) The above figures are based on one machine gun, and since this plane has 2 machine guns firing in the same direction, each shot puts 2 rounds within the above spaces.
(g) In accordance with the above, the most advantageous attack tactics for this plane are obviously to pursue the target on the same course and fire while keeping it continuously in the sights.

According to "Moonlight Interceptor" by Robert C. Mikesh & Osamu Tagaya, the 251Ku aircraft was flown by "Superior Flight Petty Officer (SFPO)" Kudo Shigetoshi in the pilot seat and "Lt. (jg)" Sugawara Akira.
The two B-17s  were flown by Major Paul I. Williams (his bomber was named "Honi Kuu Okole" Hawaiian for "Kiss my ass", s.n. 41-9244 ) and Capt Joseph W. Geddes (his unnamed bomber had s.n. 41-9011) of the 64th Bomb Squadron.

Wiki continues:
"The Navy took immediate notice and placed orders with Nakajima for the newly designated J1N1-S nightfighter design. This model was christened the Model 11 Gekko (月光, "Moonlight"). It had a crew of two, eliminating the navigator position. Like the KAI, it had twin 20 mm Type 99 Model 1 cannon firing upward in a 30° upward angle, but added a second pair firing downward at a forward 30° angle, allowing attacks from above or below. This arrangement was effective against B-17 Flying Fortress bombers and B-24 Liberators, which usually had Sperry ball turrets for ventral defense. The Gekko's existence was not quickly understood by the Allies, who assumed the Japanese did not have the technology for night fighter designs. Early versions had nose searchlights in place of radar. Later models, the J1N1-Sa Model 11a, omitted the two downward-firing guns and added another 20 mm cannon to face upward as with the other two. Other variants without nose antennae or searchlight added a 20 mm cannon to the nose."
Posted by Arawasi

You might find this funny. While the crew thought "Honi Kuu Okole" was Hawaiian for "kiss my ass", it actually translated as "massage my buttock". Ken's Men Against the Empire by Lawrence J. Hickey has a very interesting history of this aircraft.

Fascinating...extra thanks for the literal translation :)..I'l definitely have read that book.