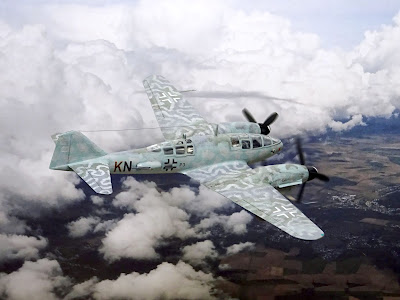 What if the Mitsubishi Ki-46 had been license-built by Germany…?
Several German aircraft, including the Junkers Ju 87 or the Messerschmitt Bf 109E and Me 210, had been evaluated by Japan – and there had apparently interest in Japanese aircraft by the RLM, too. In literature the Mitsubishi Ki-46 frequently pops up as a hot candidate for potential license production in Germany, but the circumstances remain obscure, and in real life this never happened. However, this historic development offers a nice plain canvas for a “what-if” model of a Germanized Ki-46, and my interpretation became the fictional Gotha Go 146 reconnaissance aircraft, and a respective model of it: a 1:72 scale Gotha Go 146 B-1; aircraft ‘P3+KN’ of II(F)/FAG 104 (5. Staffel, 2. Gruppe, Fernaufklärergruppe 104), Deutsche Luftwaffe; Biblis (Hessia, near Mannheim), late 1944. 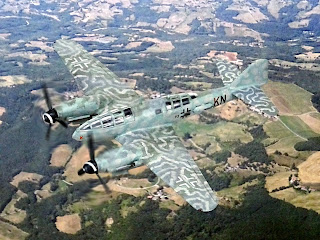 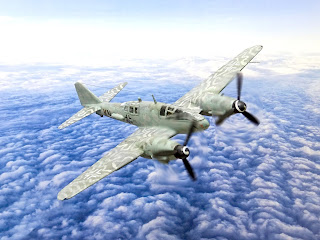 Two versions of the Go 146 B were produced, steadily but only at a low rate because the aircraft received, due to its highly specialized role and limited offensive capabilities, only a low priority. The B-1 was the main variant and kept the A version’s standard wing, a total of 54 were produced between 1943 and 1945. Additionally, the B-2 was produced between late 1943 and early 1944 as a dedicated high altitude photo reconnaissance aircraft. This sub-variant had an extended wingspan of 16.00 m (52 ft 5 in) instead of the standard 14.70 m (48 ft 2¾ in) and an improved oxygen system, even though the cabin was not pressurized. Its maximum service ceiling was almost 12.000 m (39.305 ft), with a maximum speed of 415 mph (668 km/h), a cruise speed of 250 mph (400 km/h) and a range of 3,200 km (1,987 nmi). Only twelve of these machines were produced and put into service, primarily for flights over Southern Great Britain. When the Arado Ar 234 became available from September 1944 on, though, this new, jet-powered type immediately replaced the Go 146 B-2 because it offered even better performance. Therefore, the B-3, a planned version with a fully pressurized cabin and an even bigger wingspan of 19.00 m, never left the drawing board.
Furthermore, the RLM had idea to convert the fast Go 146 into a fighter and even a night fighter in mid-1944 as the “C” series. But these plans were not executed because the light airframe could hardly be adapted to heavy weapons or equipment like a radar set, and it was unsuited for vigorous dogfighting. The type’s poor climbing rate made it ineffective as an interceptor, too. There were, nevertheless, tests with at least one Go 146 B-1 that carried four Werfer-Granate 21 rocket launchers under the outer wings, as a fast bomber interceptor esp. against the high-flying B-29, which was expected to appear over continental Europe soon. But this kind of weaponry never reached frontline units and the Go 146 was never operated as a fighter of any kind.
There were, however, other uses: in 1944 the Go 146 was enlisted as a fast liaison aircraft for the RLM (Ministry of Aviation) in Berlin. Stripped of any armament and cameras and outfitted with two passenger seats in the rear cabin, at least one Go 146 B (with the confirmed registration “ST+ZA”, others in similar configuration may have existed, too) was operated by the RLM’s Zentralabteilung (central command) from Tempelhof airfield for top brass officials between Luftwaffe locations on German terrain. ST+ZA’s fate after January 1945 is uncertain, though. 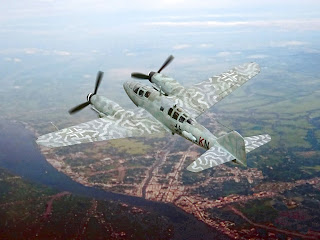 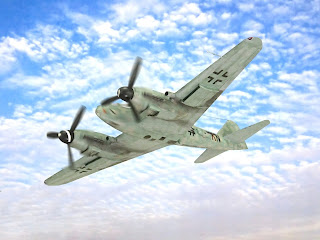 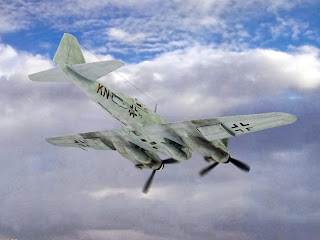 The kit, its assembly and paint scheme
This is a déjà vu build: I already did a “Germanized” Ki-46 in 2015, an Airfix Ki-46-II outfitted with DB 601s from a Bf 110 as a pre-series Gotha Go 146 A-0. However, as I built this modified Dinah back then I already felt that the concept had more potential, and the streamlined Ki-46-III just lent itself for an updated, later version.
This variant was based on the LS Models (ARII boxing) Ki-46-III kit from 1975. It was basically taken OOB, but, naturally, with some mods: inline engines and parts of their wing fairings were transplanted from a Bilek Me 210, together with the underwing radiators. This switch was insofar easy because the LS Models Ki-46 kit has separate parts for the engines and their fairings which also contain the main landing gear wells. The main wheels were replaced with slightly smaller and narrower ones from the scrap box.
Inside, I implanted a dashboard for the pilot and the rear cabin seat was reversed and moved further forward. A scratched targeting scope/weapon control column for the FDSL 131 installation was added. The wacky OOB figures were replaced with better Matchbox pilots. Due to the heavily framed canopies, little of the interior can be seen, though.
The gun barbettes were scratched from WWII bombs as fairings and leftover landing gear struts as gun barrels. The barbettes look somewhat superficial on the slender Dinah, but they are a nice, typically German detail, über-complicated for this type of fast aircraft that probably would have more benefited from leaving them away altogether. The 300 l drop tanks came from Hobby Boss Bf 109s, outfitted with four small, scratched pylons each.
The paint scheme evolved gradually and was inspired by real German late WWII aircraft. The basis became an overall coat of RLM 76 (Tamiya XF-23, Light Blue), with blotches of RLM 77 “Hellgrau” added to the flanks. I used XF-19 (Sky Grey) as a low contrast option (the real RLM 77 was almost white) and extended the mottles under the fuselage and the engine nacelles, for a semi-wraparound scheme.
The upper surfaces were painted with cloudy RLM 02 and 75 (Tamiya XF-22 and XF-XX as proxies) over the uniform RLM 76 base, and to further lighten everything up and break up the aircraft’s outlines, I added a meander pattern with RLM 77 (again XF-19).
Markings are intentionally minimal. Balkenkreuz markings only consisting of outlines were used for a low-visibility look. The model/aircraft belongs to a fictional unit, its code “P3” in front of the fuselage Balkenkreuze has no real-world reference and was done in small black 2mm letters, a typical late WWII measure. A fictional unit badge, depicting a running greyhound, was added under the cockpit, it belongs to a German tank unit (taken from a Hasegawa 1:72 Panzer V Panther sheet).
The “KN” part of the code, including the red “Ks” on the nose, came from an Airfix Ju 87 B sheet. As an aircraft belonging to the 5th squadron within the unit’s 2nd group, the 4th letter in the code became “N”, while the 3rd letter “K” denotes the individual aircraft. The color code associated with any 5th Luftwaffe squadron was red, incorporated on the aircraft as a thin red outline around the individual aircraft letter. Since this aircraft would operate over the Western front from German home ground, no further ID/theatre markings like fuselage or wing bands or wingtips in yellow or white etc. were added. After some exhaust and oil stains with graphite and Tamiya “Smoke”, a coat of acrylic matt varnish finally sealed the model and a wire antenna, made from heated sprue material, was added. 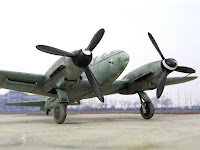 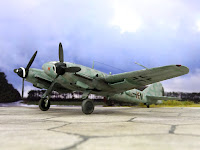 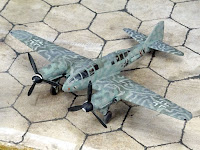 Thanks a lot for consideration and posting! :D

This is again very creative Dizzifugu, and the history sounds so plausible it could pass for real. Excellent conversion, too, even if it looks like the DB 603 make the plane quite nose-heavy. How about a tricycle landing gear?

Glad you like it, Michael. That's why I gave it the gun barbettes - together with the internal gun mounts and their position quite far back on the hull, they could be a good counterweight. For a tricycle landing gear the wing would probably have had to be moved further back, but it's a nice idea.