Radek sent over a quite interesting photo he spotted on ebay, featuring a "Claude" at an unspecified airfield right after the end of the war. 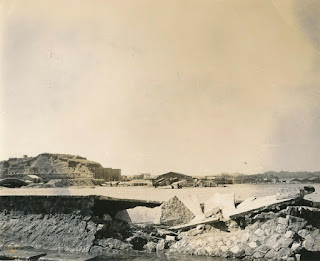 Unfortunately, the resolution of the photo leaves much to be desired and the tail marking is not clear, so we had difficulty identifying the unit.
A closeup revealed that the aircraft had no tail cone and more interestingly, had a kanji on the fuselage hinomaru.

We thought we could see the kana for Usa (not U.S.A.) (ウサ) Kokutai, but the unit was a torpedo bomber training unit and had no fighters. More importantly, if the kana are "U SA", they are written backwards, from front to rear, actually "サウ - ???". On the starboard side of the tail, the marking was written from rear to front. The hinomaru kanji also looked a bit weird to me, so we thought of reversing the image. 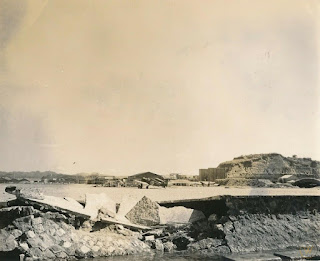 When reversed, the hinomaru kanji could be "寅" (tora - tiger) and the tail marking would look like it started with a "ya" (ヤ).

There were two possible units that had tail markings starting with "ya". Yatabe Kokutai (tail marking "ya") and Yamato Kokutai (tail marking "ヤマ" yama ).
Confusingly, a document put together at the end of the war listing all the aircraft of the YatabeKu, operational and not, does not include any "Claudes".
Same with the YamatoKu.
So, for the moment, until a clearer version of the photo pops up, we cannot identify the unit and the markings. Maybe our Japanese readers can help?
Update - Radek sent over the following:
"search a little and found out that it was the Opamma base. And it looks like the photo is correctly oriented in its original state.
The yellow arrow is where the photographer was probably standing.
Red circle - concrete cover
Green circle - building
Blue circle - building with "tunnel"
Purple circle - val
Yellow circle - the notorious photo of a group of aircraft" 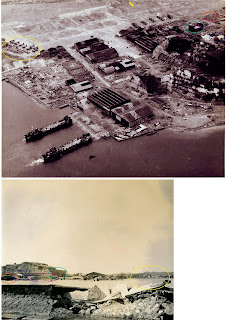 Update - Radek spotted another photo of the "Claude", in the red circle. 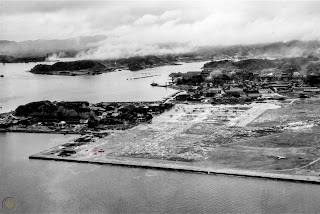 Such rare photos from the now identified Opamma airbase!

Is that particular Claude in depicted in overall topside Green ?..any thoughts or speculations?

Thanks, Radek and George