Following yesterday's posting we hope to continue our discussion on the very interesting subject of AURI aviation.
The second issue of our magazine released in October 2005 featured a short but very interesting article by Jacob T. on the subject of Indonesian "Willows". The accompanying artwork showed the sample aircraft in green top and trainer orange bottom. I would like to explain a bit why we opted for this particular scheme.
It is very important to keep in mind that Japanese aircraft left the factories painted according to their officially designated role, not how they were eventually used by the units. According to official regulations, from 1939 onwards, all trainers were to be painted "trainer orange" (or orange-yellow or yellow-orange...). So all trainers left the factories in overall "trainer orange" regardless of how they were used by the units that received them. Sometimes trainers were used for liaison, transport or even reconnaissance purposes. Therefore front line units camouflaged their planes as best they could but that does not mean that they stripped the aircraft of their previous factory applied paint and repainted them; an extremely tedious and time-consuming process for front line units having their hands busy with combat.
Simply put, if a Navy Air unit somewhere in Indonesia happened to have an "Akatonbo" trainer but used it to transport mail, they probably camouflaged the top surfaces (to hide the plane while on the ground) but wouldn't bother to change the colour of the lower surfaces to "gray".
I would like to ask our readers to imagine for a second the process of painting or re-painting the under surfaces of a plane by comparing it to a car mechanic under a vehicle using an airbrush or even a simple paint brush. Not very comfortable or pleasant, right?
Ofcourse as very often happens with Japanese airplanes, there were exceptions but some collaborating evidence (a testimony or a colour photo) would be necessary to prove the exception to this general rule.

"TJ" stood for "Tjureng", the way the Japanese word "Churen" (sort for Chukan Rensuki = intermediate trainer) was written in Indonesian.
From left to right: Tjureng 72- TJ 54 and a Tjukiu wreck.
Photo: Jacob T. via Herman Dekker
When AURI found the "Akatonbo" left back by the surrendering Japanese forces, they either used them as they were by changing the national insignia or they brought some of them to airworthy condition. Yes, they most probably camouflaged the top surfaces to hide the planes on the ground from the Dutch forces but until now we have seen no evidence that they spent time overpainting the wing and/or fuselage undersurfaces "gray" or some other colour. We hope our Indonesian friends would be interested to share with us their thoughts on the colour subject. We would also be very interested in testimonies of Indonesian pilots who flew the "Willow" if available.
Feel free to commend or send us material directly to our email address.
Terima kasih.

Hello fellow readers,
This photo might gave us hint what is the underside color of Indonesian Churen. 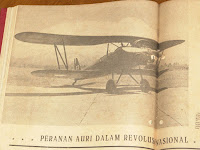 From my point of view the underside color was a dark color slightly in the same shade with the red portion on the roundel. Photo was taken from an AURI internal publication magazine but I forgot to write down the date of publication. But I'm sure it was before 1970.
Sinang
Posted by Arawasi