A brilliant photo of a Japanese built Airspeed Envoy with the registration  J-BAOS in Haneda Airport. According to the Civil Aircraft Register it was the eighth aircraft produced by Mitsubishi.
Here's what Wiki has to say about the type in Japanese service:
"Two Envoy-Is were delivered to Japan in 1935, one for evaluation by the Japan Air Transport Co. (NKYKK - Nihon Koku Yuso KK) and one for the Imperial Japanese Navy Air Service as the Airspeed LXM. With the acquisition of a licence, production started at the Nagoya Mitsubishi factory of the Mitsubishi Hinazuru-type Passenger Transport, initially powered by Gasuden Jimpu engines, but later using licence built Armstrong Siddeley Lynx or Wolseley Aries Mk.III engines. Mitsubishi built aircraft also had landing flaps which were not fitted to Airspeed built Envoys. Flight testing of the Jimpu powered aircraft resulted in a crash, killing the flight test observer, (the first fatality during flight testing of Mitsubishi aircraft), blamed on the engines producing excessive drag, resulting in the switch to licence-built British engines. Eleven aircraft were built at Nagoya before production ceased, all of which flew domestic services for NKYKK (later to become Greater Japan Airways)." 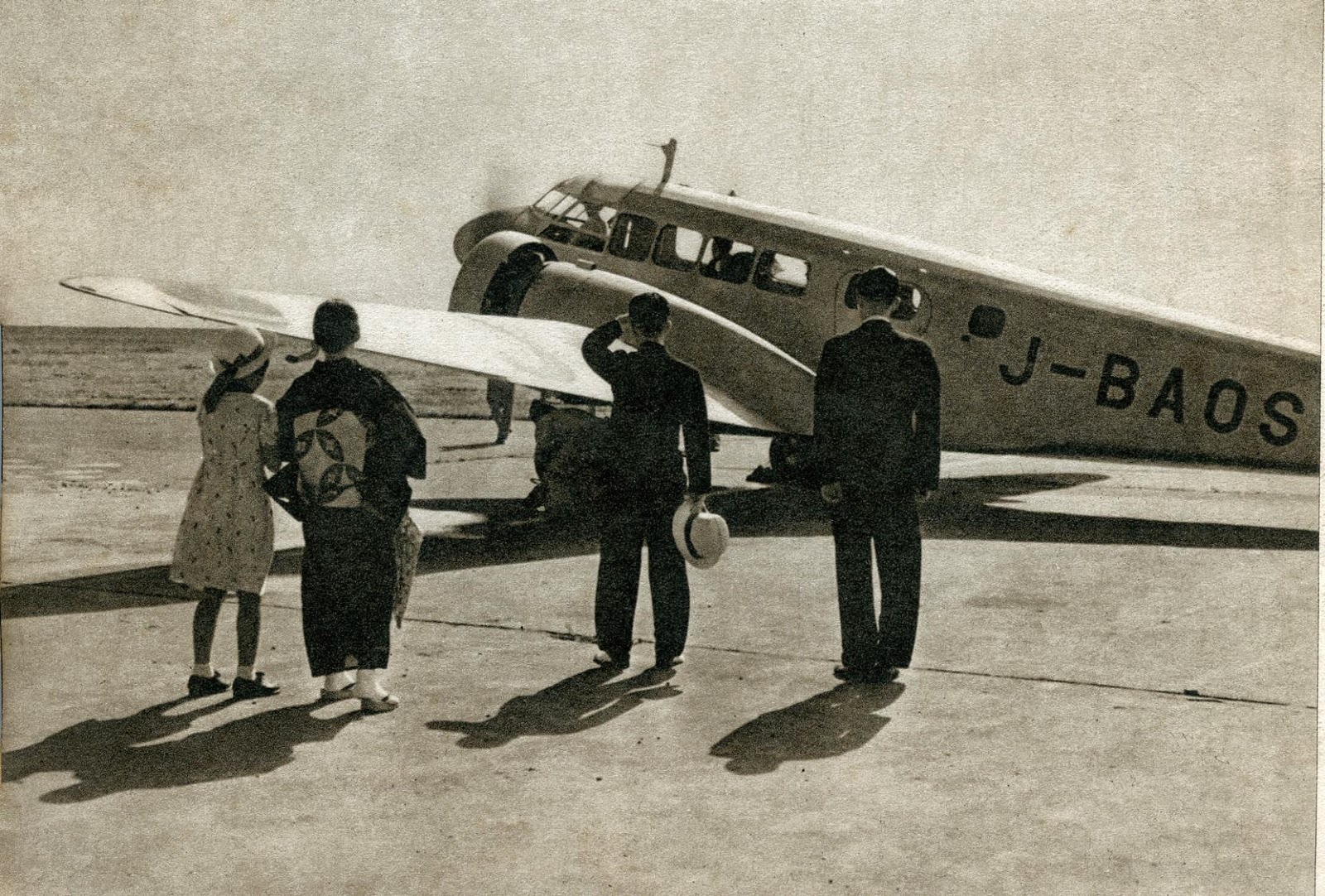 Six of these low wing monoplane passenger transports were imported by Mitsubishi in early 1935. Five were for NKYKK to replace its Fokker Super Universals and one was for evaluation by the IJN; in mid-1935 Mitsubishi also obtained licensed production rights. The imported aircraft were:

It is not known for certain which aircraft was evaluated by the IJN as Airspeed Envoy Transport Plane, LXM1, but the most likely possibility is C/n 41 as its registration is out of sequence with the other five. This registration might have been issued later on release by the Navy after its evaluation and at the time when the Mitsubishi built aircraft were registered as it is in sequence with them (see below). In any event, the IJN took no further interest in it.

The Mitsubishi built aircraft were designated Hinazuru (Young Crane) and the first, registered J-BAOD, was equipped with flaps and Gasuden Jimpȗ 5A engines, but eventually crashed on flight trials. Unfortunately the pilot was badly injured and the accompanying engineer killed, the first Mitsubishi test flying fatality since it started aircraft production 17 years previously. The cause was recorded as a stall, thought to be due to the engine installation as the original Townend Ring cowlings had been enlarged to accommodate the Jimpȗ 5A, thus disrupting airflow over the wings. The remaining ten production aircraft all omitted the flaps and appear to have been fitted with various engines, either more imported Aries or Lynx type as on the original Envoys, or Lynx type, licence built by Mitsubishi. They were all supplied to NKYKK during 1936/38 registered BAOI/OK/OP/OR/OV/OW and BAOL/OQ/OS/OX, later re-registered DAOL/OQ/OS/OX, respectively, but those with the unreliable locally built engines were restricted to flights over mainland Japan and Taiwan.

Mitsubishi production of the Hinazuru started in 1936 and was terminated in 1938.
Thank you very much Peter for the additional information.
Posted by Arawasi